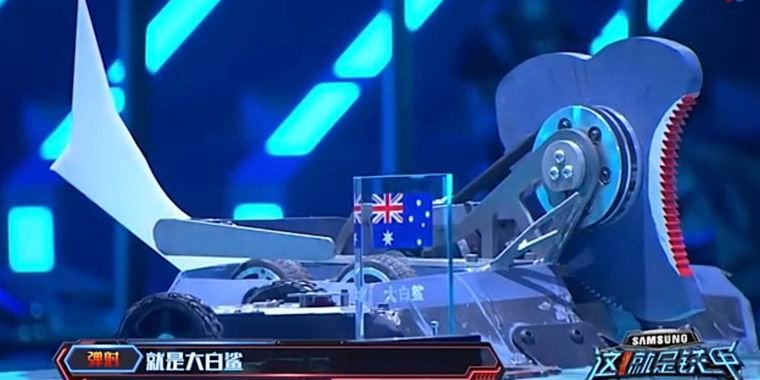 On Monday, several YouTubers had their videos removed from the service due to YouTube’s restrictions on animal fighting footage. This was confusing, as the videos in question didn’t show any animals fighting; instead they let robots fight.

Robot battles have been around since Marc Thorpe launched the inaugural Robot Wars in San Francisco in 1994. It has become popular around the world through shows like BattleBots in the U.S, Robot Wars in the UK, and the more recent King of Bots in China.

The big televised events usually show heavy (200lb/80kg+) bots, but those matches are infrequent, so smaller weight classes have become popular. These classes require less money and less arena space, and some of the more popular events have small bots in the “insect weight” classes (150 grams for Ant [UK]/fleas [US]), 1 pound for Ant [US], and 3 pounds for Beetle). Of course, builders love to record and share videos of these robot battles.

On August 19, some of the smaller robot builders received an email from YouTube accusing them of uploading animal fighting videos.

One such message (displayed as an image above) reads:

Your video has been marked for review by us. After review, we determined it violates our guidelines and removed it from YouTube.

We know this may be disappointing, but it’s important to us that YouTube is a safe place for everyone. If content breaks our rules, we’ll remove it. If you think we’ve made a mistake, you can appeal and we’ll take another look. Keep reading for more details.

Content that depicts intentional cruelty to animals or forcing animals to fight is not allowed on YouTube. Examples include, but are not limited to, dogfights and cockfights. We assess educational, documentary, artistic and scientific content on a case-by-case basis. Limited exceptions are made for content with sufficient and appropriate context and where the purpose of posting is clear.

Please note that this removal did not result in a Community Guidelines strike or fine on your account.

Some creators were not so lucky and were warned to strike.

Paul Sinn, a West Coast robot builder who has competed with his family as “House of Sinn” since 2010, had 31 YouTube videos removed. This resulted in two strikes on his account, meaning he will not be able to upload any content for two weeks. If he has a third attack within 90 days, he can be banned permanently.

I document the events here in Seattle… and… [my brother] records the events in California. We edit the videos when we can and upload them to my YouTube channel. I currently have 1600+ videos from Flea to Hobby Weight robots. I don’t make money from these videos so these videos didn’t hurt me financially, but some of the best bot designs got off the ground like Dark Pummeler and Launchpad McWhack. Now I have appealed all my videos. I do not intend to stop recording or participate in competitions.

Andrew Rossol had several videos taken down at RoboGames2017 that he had taken down. Rossol has been uploading videos on behalf of the BattleBots team Deep Six for over 13 years. “I think it’s crazy that this stuff is being flagged,” he said.

Rossol’s fighting videos feature some bot names that may suggest animals, such as “Sliver King vs catKong – RoboGames 2017.” But no real animals are found in the video.

Henry Aird, another Seattle builder and competitor, also received takedown requests for videos from a Western Allied Robotics (WAR) event uploaded in May 2015. in terms of their content. They don’t contain “insect” tags, which confused Aird.

“The strange thing is, my videos were called ‘0037’ and ‘0050’,” Aird said. “I didn’t change the video names or even tag them — they were just hastily uploaded to my page and essentially sent it to someone else to to solve. And they were still flagged for animal cruelty, so nothing makes sense to me. †

The takedown requests make it clear that the videos have been “reviewed” by YouTube first. This raises questions about what these ratings look like. Is the “reviewer” a computer program? It seems unlikely that people actually watched the videos in question.

We asked YouTube what happened here, and a spokesperson told us that the site is sometimes wrong. “With the sheer amount of videos on our site, we sometimes make the wrong decision,” said the spokesperson. “If we find that a video has been removed in error, we act quickly to restore it. We also provide uploaders with an opportunity to appeal removals and we will re-evaluate the content.”

There is no ban on robot fighting videos, we were told.

After the problem was noticed, most (but not all) of the videos came back suddenly, unannounced early on August 20.

Moderation at scale is difficult, and it’s tempting to use algorithms, AI, and machine learning to do it. But this story is a prime example of why human judgment continues to be a part of the digital systems that increasingly influence our lives.