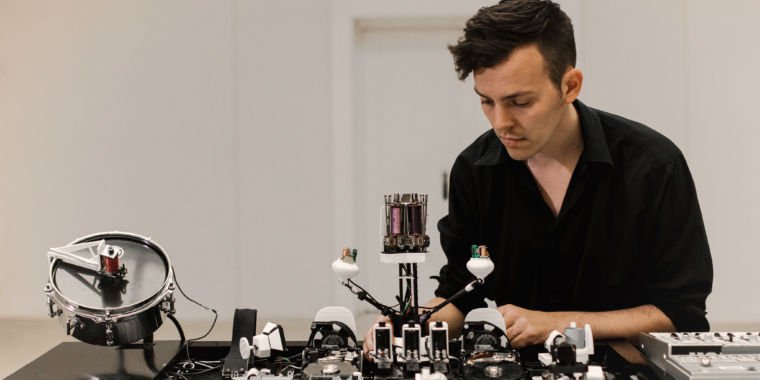 AUSTIN, Texas – When you find “Entropy” by Moritz Simon Geist on Spotify, you might not think anything of it. The song is built on repetitive, booming phrases stacked on top of each other in ways you can move your head to. Along with the rest of the songs on The material turnIt wouldn’t look out of place as deep cuts to the DFA Records catalog, but they’re less obviously electronic – no soaring synths or rousing rhythmic glitches here. Instead, “Entropy” has that husky groove of an early song from The XX, along with an overall industrial aesthetic that music fans loved about Nine Inch Nails. “Entropy” is a dance number, but sinister, something that could soundtrack a highly stylized sci-fi movie or a dungeon level in a cool side scroller.

All that to say, Moritz Simon Geist wrote a catchy song. But what makes this remarkable is – unlike Hot Chip or Trent Reznor or anyone else – Geist’s music doesn’t start from a synthesizer or come out of his computer. He is “the world’s only techno producer who plays completely with his homemade futuristic robots”, as the press release for his new EP, speculative machine, places it. Glitchy tones on a track like “Maschyn” may come from a circuit board he printed himself. Hissing sounds that listeners are used to hearing from cymbals instead come from controlled bursts of compressed air. The eerie melody of “Entropy” literally uses one of the oldest forms of a DIY instrument: water glasses filled with liquid to produce different tones, but this time they’re played by a motorized set of hammers. And unless you see him perform live – as several new fans did during Geist’s seven-performance run at SXSW 2019 – you may never know that something extraordinary is happening.

“There are a lot of experimental artists who put a lot of emphasis on the experimental part. For me, the music has to stand on its own,” he tells Ars. “This artwork has a technical aspect to how it’s made, but it has to be really good in content. I want to make this music good and on the same level as someone with a computer or synthesizer would program music. Ultimately, of course, mine is just made with robots – and they add different layers or special sounds that you can’t replicate with a synth or maybe not replicate at all.”

Geist describes himself as a “performer, musicologist and robotics engineer,” but he is essentially a musician if the orchestral intricacies of his work don’t betray it. Growing up with classical music training – clarinet, piano and guitar – he only started tinkering with electronics out of a desire to take those instruments further.

“I didn’t have any money, so I started building my own guitar effects pedals,” he tells Ars. “And this got me hooked on electronics and the technical aspect, even though I was 14, so maybe you wouldn’t call it engineering. Eventually I started studying electrical engineering and kept doing art and music at the same time.”

Geist would push his budding love for technology to the limit. He even worked as a research engineer until he decided to start making music full-time from 2012. At the time, he still had the concept of robotic music – uniquely crafted noise making devices that could be played automatically on demand, but not quite the toolset.

“I wanted to play the physical aspect of playing the piano – you touch things, you can touch the strings – it can be felt. I wanted to bring that to electronic music, computer generated music. I was looking for the way to make the electronic sound.” to do, the techno music I love, but with a more physical aspect,” he says. †[But to start,] I made things in wood. If you do something in wood once, it’s nice, but if you need 21 pieces…”

Today, Geist does much more traditional technical work, focused only specifically on building instruments and automated means to play them. His interest in music long predates all aspects of his work that could fall under the Maker Movement, but the musician relies on many of that community’s most common and popular hobbyist tools and techniques: laser cutters, Arduinos, 3D printers, circuit boards, etc. For example, after a short interview at SXSW, he walked through the exhibit hall with Ars – and like a kid in a candy store, he quickly had to split up to chat with exhibitors offering controllers in a variety of form factors, from gloves to headphones.

“A good work of art starts with a brilliant idea, but how you translate it into a full-blown work of art depends a lot on the techniques you have,” he says. “Today it is very simple: the prototyping is very short. You have Arduinos, PCBs [printed circuit boards] made in china that you can ship here… the development process is really quick and easy. It makes the fail-quick attitude in art pretty easy.”

It’s hard to believe #SXSW was barely two weeks ago. We may have more stories from Austin coming soon – here’s a little preview of something that will hit the scene this weekend. https://t.co/OfdBE2oFdS pic.twitter.com/Td8XxIxD19

Geist’s music leaves little room for improvisation. Instead, he spends months crafting his instruments — 3D-printed kalimbas, salvaged hard drives, or batteries now set to click and spark — to build a specific set list or album. Sometimes they’re obviously based on a real-world analog (he once built a robo-replica of a Roland TR-808 drum machine, for example), but that’s not always the case. One of his next instruments will be a vibraphone, but “a futuristic version of that,” he says. Instead of differently tinted rods arranged neatly on a flat playing surface, Geist imagines his rods, some ten feet high, all over the physical space in a gigantic ambient robotic installation. Trips through places like the SXSW Exhibit Hall help inspire him to do it.

While Geist’s more recent creations include clear visual elements (LEDs or small pieces of Styrofoam to blow in sync), this isn’t a chicken-and-egg situation between his bots and his music. Geist starts with a sound, usually from a robot, and builds from there.

“In the beginning I tried to mimic music that I had in mind that was from pop culture or electronic music. But that doesn’t work well with robots because their capabilities are very limited,” he says. “So I realized when I started recording, I have to take the limited sound of the robot, listen to what it’s doing and develop the track from that instead of having a brilliant idea for an orchestra and trying it with the limited possibilities from a robot – it doesn’t work, that’s too far away. [Historically,] this is basically how electronic music was made – look back to the 808’s and the great drum machine. It was very limited, but people took that sound and developed genres like hip-hop, electro or techno from a range of limited sounds. Now it’s iconic.”

So far, the results seem to speak for themselves. Not only did Geist make seven appearances at his first SXSW, he seemed to attract quite the crowd. Ars saw NPR Music’s Bob Boilen sneak in and out of the SXSW Innovation Awards, where Geist provided the nighttime music, and the musician landed on “Best of” festival lists everywhere. Variety (“your friends who go to museums might like it as much as your friends who go to underground techno shows”) to rolling stone (“see-believe-it-EDM”).

Ars also caught a show firsthand (see a few clips in the tweet above). We left impressed even though Geist couldn’t bring it? everything from his workshop (bless that airport baggage staff) and had to work with a limited visual palette accordingly. And when we asked the artist how the audience reacted to his first headline appearances over the weekend, he seemed pleased too.

“There’s something futuristic going on onstage, but they’re not sure what’s really going on — it’s like, ‘What the hell is going on? It’s cool, but I don’t really know what’s going on? is going on,” he says. “I think we succeeded.”