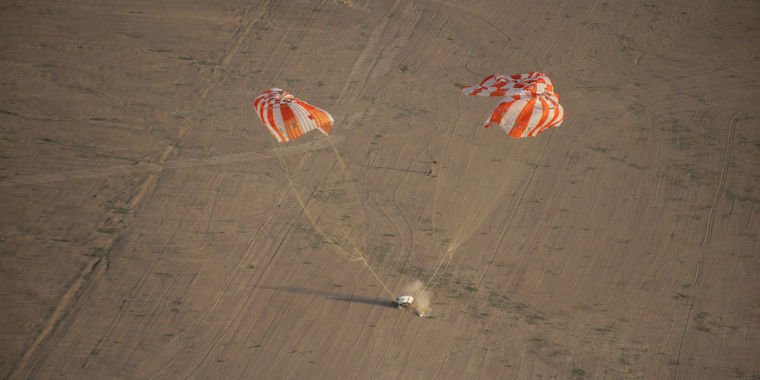 Last week, NASA’s acting chief technologist, Douglas Terrier, visited Jacobs, one of NASA’s prime contractors in the Houston area. Along with a handful of media members, he spent about an hour touring the company’s tech development facility, where the company supports NASA programs from the International Space Station to the Orion spacecraft.

During one stop on the tour, Terrier learned about a new distiller that could more efficiently recover water from urine during long-duration missions. In another, he heard about new debris sensors that will go to the station to record micrometeorite and orbital debris impacts. And from yet another, he heard about the parachute system Jacobs helped develop for the Orion spacecraft.

The Jacobs engineer who spoke about the contract said the company worked with several Houston-based companies and leveraged knowledge from the region’s major oil and gas economy. These partnerships, she said, had saved NASA money over the course of the agency’s 11-year contract with Jacobs to design and build Orion’s parachutes.

Terrier continued to nod kindly and ask clarifying questions. The tour continued. But inwardly I was stunned. It certainly didn’t take 11 years (and more) to develop and test parachutes for a spacecraft. After all, between 1961 and 1972, people went from the first flight with Yuri Gagarin to flying Apollo missions to the moon. And if it were true, what did it mean for where NASA was really going in terms of human exploration?

It was true. According to NASA spokeswoman Barbara Zelon, the contract to develop and certify the Orion parachute system has been running for 11 years. This included early concept and trade studies, numerous ground tests, and 17 full-scale development airdrop tests required to prove a wide variety of failure scenarios. Finally, Orion has completed three of the last eight human certification airdrop tests and plans to complete human certification in early 2019. So Jacobs probably has a parachute development contract for at least 13 years.

In a sense, this is what NASA does. It tests new technologies at the frontier of exploration and then shares them with industry. For example, Zelon said NASA has shared more than 300 artifacts, including the design, models and test data, with the agency’s commercial crew partners: Boeing and SpaceX. This allowed them to take advantage of NASA’s efforts and eliminate almost all development work and unique testing. This will save both NASA and the companies money in the long run.

But what does it say about a reconnaissance program that takes 13 years to develop a parachute system? After all, NASA’s Mercury, Gemini, and Apollo capsules all had parachute systems, too, and they were all developed within a few years. NASA had a broad base of knowledge to draw from (Orion will probably just come back from the moon, like the Apollo pods, though it’s bigger). It seemed that a 13-year parachute development contract might indicate that the agency really wasn’t going anywhere anytime soon.

After the Jacobs tour, I put this question to Terrier. He didn’t flinch. “I think it’s a very fair question,” he said. I think it’s a very fair debate to ask if we as a nation are taking this seriously and making it a priority. What we’ve enjoyed is a very consistent level of support, but it’s certainly not the Apollo or Manhattan-esque project to get this thing off the ground in seven years.”

That’s not to say that NASA, or its large contract base, is any less skilled than it was in the 1960s. Far from it, Terrier said. “I think it’s important to realize that the team and the technology and production are very capable of that, the moment someone flips that switch. The speed at which we move is not limited by the capabilities of NASA or the contractors; it is limited by resources and, quite frankly, political emphasis.

Here Terrier has highlighted the biggest reason why the United States and NASA haven’t gone beyond the moon, or even sent humans back, since 1969. Once the Apollo program met its Cold War requirements, NASA’s priority dropped and funding dried up. NASA has since had significantly less money left over compared to the rest of the federal budget. It then tried to put together a meaningful human exploration program in low Earth orbit with the shuttle and space station.

Perhaps the new management will change that. Vice President Mike Pence has spoken of a renewed human exploration plan, along with a willingness to inject more low-cost, commercial space into the mix to push NASA further and faster. Sure, the potential is there. But for now, the switch still needs to be flipped.