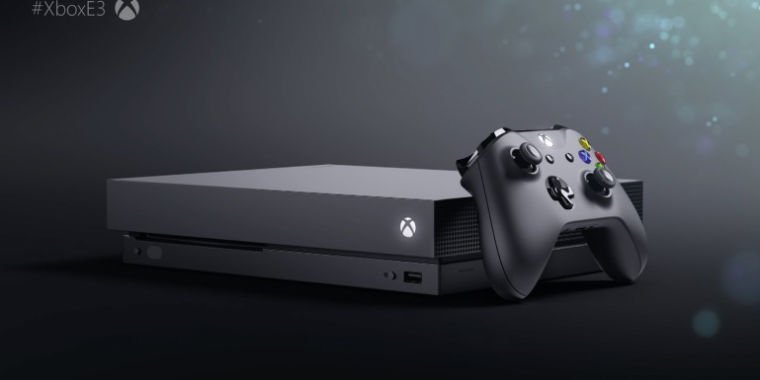 Xbox One Project Scorpio is no more. Introducing the £450 Xbox One X, Microsoft’s effort to bring 4K HDR visuals to console gamers with six teraflops of graphic grunt and a sleek design similar to the Xbox One S that has been dubbed “the smallest Xbox ever”. It is scheduled for worldwide release on November 7, 2017 for $500/£450.

Xbox One X pre-orders aren’t quite available yet (pending FCC accreditation), but some retailers will let you “register your interest” like Game in the UK, or Amazon in the UK and Amazon in the US.

Microsoft chose Turn 10s forza 7 as the first game shown on Xbox One X. In addition to ‘super high resolution assets’, forza 7 will feature the Porsche 2018 GT2 RS supercar, a car not yet for sale in real life. Against the criticism that few compelling games have launched on Xbox One, Microsoft promises that 22 console exclusives will launch on both the OG Xbox One and Xbox One X.

Next forza, Microsoft debuted Metro Exodus, a sequel to 4A Games’ Metro Last Light to be published in 2018. This was quickly followed by a 4K demo from Assassin’s Creed Origins. Press PC Shooter PlayerUnknown’s Battlegrounds launching later this year exclusively for Xbox One and Xbox One X. The list of games featured, most with 4K and HDR support, is as follows:

Microsoft also had a slew of indie games, boasting that over 500 were released through the ID@Xbox developer scheme. Microsoft is continuing its backward compatibility program, which allows Xbox One players to play Xbox 360 games, and is bringing original Xbox games to Xbox One. That includes fan favorite Crimson Skies.

While Microsoft is primarily presenting the Xbox One X as a 4K console, those with 1080p televisions will see graphical improvements. It’s not clear yet if that’s via supersampling or higher frame rates, but more details are expected at E3. Those with an existing library of games will be happy to hear that Microsoft is providing Xbox One X patches, introducing 4K support and enhanced visuals.

The Xbox One X is powered by an all-new AMD GPU, which features 40 “custom” Radeon computing units (compared to just 12 on the Xbox One and Xbox One S) clocked at an impressive 1172MHz. In contrast, the original Xbox One GPU is clocked at 853MHz, and the PS4 Pro’s is clocked at 911MHz.

An image from the back of the Xbox One X shows that the new console still has an HDMI input, so it can still do HDMI pass-through through cable boxes.

The Xbox One X originally debuted at Microsoft’s E3 2016 press conference as Project Scorpio alongside a slimmer Xbox One, the Xbox One S. Months earlier, Sony had unveiled the PS4 Pro, a 4K-compatible console with four teraflops of processing power. While Sony made the leap to Microsoft with both the announcement and release date of the PS4 Pro – which launched in October 2016 – the Xbox One X is significantly more capable graphically.

This story has been updated several times with more images and details.