Xbox, PC get a little closer with the latest Xbox updates |Techilink 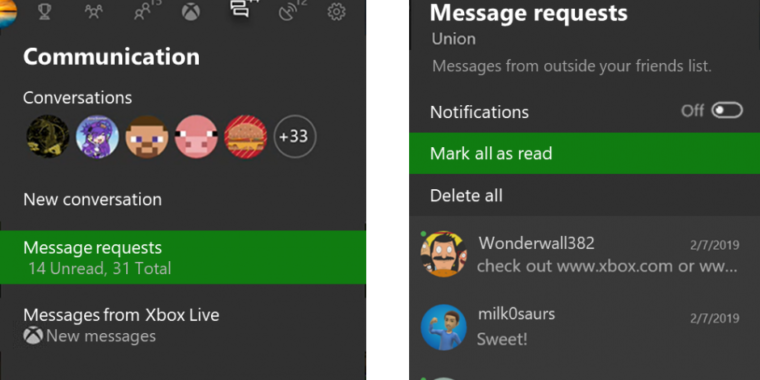 The May 2019 Update for the Xbox One system software is now rolling out and brings some minor refinements to the Friends List, Message List, and Games/Apps List.

Starting with the latter, the app list now ignores “a”, “an”, and “the” when sorting or grouping alphabetically. This is the kind of change that surprises me they didn’t already do this because it almost always makes lists easier to use. Video games don’t even have The the have to deal with.

The change in Messages is rather inexplicable. There’s a sensible change: incoming message requests from your friends are now prioritized, while requests from non-friends are placed in a separate category. But for some reason, Microsoft will delete all group messages as a result. You can store backups of the messages on Xbox.com for a limited time, and messages with individual users are safe, but the group messages all go. There is no apparent justification for this change, because even if a major change were made to group messages, you would expect Microsoft to handle the migration of the messages from old to new.

The most interesting change, however, is that of the friends list. Microsoft adds indicators next to each online friend’s name to indicate whether they’re playing a game on console, using the Xbox app on Windows, or using the Xbox app on a smartphone. This should make it easier to know who to invite to games, especially as cross-platform play is becoming more common. Plus, it underscores Microsoft’s move to make Xbox a hardware-independent gaming brand: you’re still part of the Xbox ecosystem when you’re on PC or mobile. Xbox is not the hardware: Xbox plays games with your friends, wherever you and they are.

On the PC side, Windows 10’s Game Bar is rebranded as Xbox Game Bar, and the latest preview also includes the “Looking for Group” feature used to find people playing the game you want to play. Start a search for people who want to join your game and you’ll get a notification that someone has been found not only on PC, but also on Xbox. This feature was previously available on Windows in the Xbox appbut putting it in the game bar makes it faster and easier to use.

All in all, it feels like Microsoft is blurring the lines between Xbox, PC, and mobile gaming, and we can only expect those lines to get even more blurred in the future. The Xcloud gaming service further erodes these platform differences – while the premium experience will be offered on the console or a high-end PC, game streaming should be able to play many games on almost any hardware. The last missing piece would certainly be the ability to play Xbox games on PC. There are already signs that Microsoft is working on this, but such a change would further amplify this shift in emphasis from console hardware to gaming wherever you are.