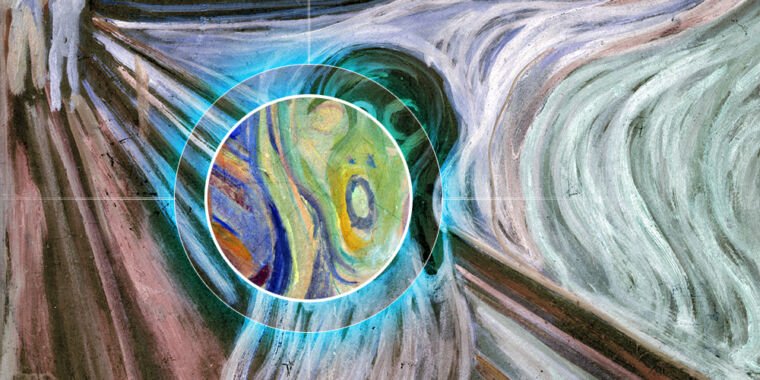 Edvard Munch’s The Scream is one of the most iconic paintings of the modern age, inspiring serigraphs of Andy Warhol, the killer mask in the 1996 film screamand the appearance of an alien race known as The Silence in doctor who, including tribute to pop culture. But the canvas is showing alarming signs of degradation. That damage is not from exposure to light, but from moisture, especially from the breath of museum visitors, perhaps as they lean forward to take a closer look at the master’s brushstrokes. That is the conclusion of a new study in the journal Science Advances by an international team of scientists from Belgium, Italy, the US and Brazil.

There are actually several versions of The Scream, each unique: two paintings – one painted in 1893 and another version painted around 1910 – plus two pastels, a number of lithographic prints and a handful of drawings and sketches. The inspiration for the painting was a particularly spectacular sunset that the artist saw while walking. Munch noted the incident in a diary entry dated January 22, 1892:

One evening I was walking along a path, the city on one side and the fjord below. I felt tired and sick. I stopped and looked out over the fjord – the sun was setting and the clouds were turning blood red. I felt a scream run through nature; it seemed to me that I heard the scream. I painted this picture, painted the clouds as real blood. The color screamed. This became The Scream†

Some astronomers believe this sunset was likely the result of the 1883 eruption of Mount Krakatoa in Indonesia; In 1883 and 1884, reports of equally intense sunsets were recorded for several months in various parts of the Western Hemisphere. Other scholars reject this idea, arguing that Munch was not known for painting literal representations of things he had seen. An alternative explanation is that the red sky was the result of nacreous clouds that occur at that particular latitude. But the spot where Munch likely witnessed the sunset has been identified: a road overlooking Oslo from Ekeberg Hill.

The 1893 version of The Scream was stolen from the National Gallery of Norway in Oslo in 1994, where it had been moved to a new gallery as part of the festivities surrounding the 1994 Winter Olympics. (To add insult to injury, the thieves left a note: “Thanks for the poor security.”) The gallery refused to pay the ransom, the thieves were eventually caught, and the painting was recovered a few months later.

In 2004, masked gunmen stole the 1910 version of The Scream from the Munch Museum in Oslo, along with Munch’s Madonna† Although several men were convicted of the crime, the paintings were not recovered until August 2006. Both had sustained minor damage; the Madonna had several small tears, and The Scream showed signs of moisture damage in the lower right corner.

Even before the robbery, however, the canvas showed signs of degradation. According to the authors of this latest article, “Munch experimented with the use of various binders (tempera, oil and pastel) in mixtures with brilliant and powerful synthetic pigments…to make ‘colors screaming’ through combinations of brightly saturated contrasting colors and variations in the degree of gloss of their surfaces.” But these materials also pose a challenge to conservationists, as the materials tend to undergo color changes and structural damage due to photochemical reactions.

In the 1910 version of The ScreamFor example, the bright yellow paint in the background sunset and the neck area of ​​the screaming figure have shifted to an off-white color, while the thick yellow paint for the lake above the figure’s head is peeling. Therefore, it is rarely exhibited today, kept safely in a protected storage area with carefully controlled lighting conditions, temperature and humidity.

In 2010, scientists analyzed the composition of the 1893 and 1910 versions of The Scream and found that the pigments used were cadmium yellow, vermilion, ultramarine, and viridian, all common in the 19th century. There are also multiple studies (using different methods) on the degradation of cadmium yellow pigments, particularly in paintings by Henri Matisse and Vincent van Gogh. According to the authors of this latest paper, Munch’s choice of cadmium yellow poses the greatest challenge.

“It turned out that instead of using pure cadmium sulfide, as he should have done, he apparently also used a dirty version, a not very clean version that contained chlorides,” study co-author Koen Janssens of the University of Antwerp told The Guardian. “I don’t think it was an intentional use. I think he just bought a not too high level of paint. This is 1910 and at that time the chemical industry that produces the chemical pigments is there, but that doesn’t mean they have the quality control they have today.”

Janssens and his colleagues relied on the ID21 beamline from the European Synchrotron Radiation Facility (ESRF) in Grenoble, France, to further investigate the paints Munch used. Synchrotron radiation is a thin beam of very high intensity X-rays generated in a particle accelerator. Electrons are fired into a linear accelerator to increase their velocity and then injected into a storage ring. They zoom through the ring at nearly the speed of light, while a series of magnets bend and focus the electrons. In doing so, they emit X-rays, which can then be focused along the beamlines. This is useful for analyzing structure, because in general, the shorter the wavelength used (and the higher the energy of the light), the finer the details that can be imaged and/or analysed.

“When people breathe, they produce moisture and excrete chlorides.”

The scientists ran luminescence images of the canvas to see where the worst paint breakdown occurred. They were able to do this on site in the museum, thanks to a portable mobile spectroscopic platform. They then used the ESRF beamline to analyze tiny fragments (microflakes) of paint in Munch’s brushstrokes from those regions, as well as an original tube of cadmium yellow he used. They also analyzed samples of artificially aged paint models for control purposes.

The results: “Thanks to the synchrotron micro-analyses, we were able to pinpoint the main reason for the painting’s deterioration, which is moisture,” said co-author Letizia Monico of the CNR in Italy. “We also found that the impact of light in the paint is small. I am very pleased that our study can contribute to the preservation of this famous masterpiece.”

The findings suggest that better humidity control is key to preserving the canvas for future generations. “You have to start working with the relative humidity in the museum, or isolating the public from the painting, or painting from the public, say, in a way that the public can appreciate it, but they don’t breathe on the surface of the painting,” Janssens told The Guardian. “When people breathe, they produce moisture and exhale chlorides, so in general it’s not good for paintings to get too close to the breath of all the passers-by.”

That’s not a problem at the moment, with museums around the world temporarily closed due to the coronavirus pandemic. But the Munch Museum will reopen on June 15, and when it does, Janssens et al† advise future visitors to keep a safe distance. There is no need to further reduce the light level, as the study found that light is not the primary culprit for the degradation. But given the ongoing threat of moisture, the authors advised the museum to lower relative humidity slightly below the current 50 percent. Unfortunately, nothing can be done about the water damage in the lower left corner of the painting, the result of the robbery.