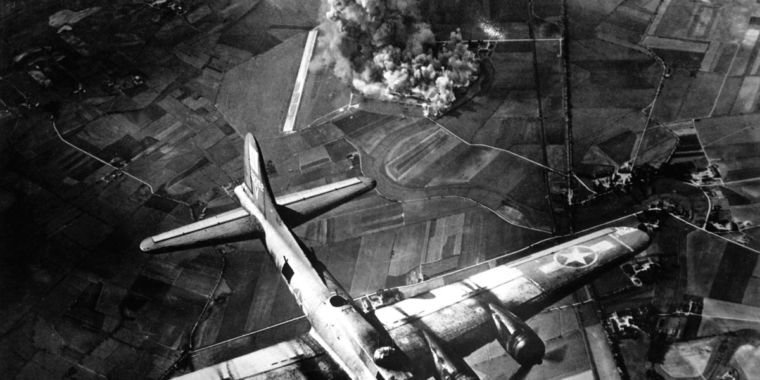 Earth’s electrified upper atmosphere (the ionosphere) experiences a lot of natural variation, changing with the days and season to season. The ionosphere can also be affected by certain major events, including solar flares, volcanic eruptions, lightning – and the huge bombs dropped on Germany during World War II. Those bombings produced shock waves strong enough to weaken the ionosphere near the edge of space.

That’s the conclusion of a new study by researchers at the University of Reading, just published in the journal Annales Geophysics. More than a historical curiosity, the finding is important because ionospheric disturbances can disrupt key communication technologies, including GPS systems, radio telescopes and radio communications.

The air raids carried out by both the Germans and the Allies in the 1940s were designed to take out critical industrial and political infrastructure – and if there happened to be civilians in the line of fire, so be it. (The Allied bombing of Hamburg in 1943 reportedly killed 45,000.) Intensifying the residents’ fear of dying was as important to strategy as the physical destruction wrought by the massive bombs. The largest bombs, weighing as much as 10 tons, were powerful enough to blast the roofs of buildings and send intense shock waves not only through the streets, but also into the skies above.

“Residents would routinely remember being thrown through the air by the pressure waves of exploding air mines.”

“Aircraft crews involved in the attacks reported that their aircraft was damaged by the bomb’s shock waves, despite being above the recommended altitude,” said study co-author and historian Patrick Major. from exploding air mines and window frames and doors would be blown off their hinges. There were even rumors that wrapping wet towels around the face could prevent the lungs from collapsing from blast waves, leaving the victims untouched from the outside.”

The effects apparently also spread through the atmosphere. The ionosphere consists of three distinct ionized regions within the different atmospheric layers of the Earth (specifically, the upper mesosphere and the lower and upper thermospheres). This means that they have a significantly higher density of electrically charged atoms and molecules than the surrounding areas. This happens because the sun’s high-energy X-rays and ultraviolet rays collide with atoms and molecules in the atmosphere with enough energy to repel electrons, creating ions (atoms and molecules with missing electrons) and free electrons.

In the absence of satellite technology, radio operators at the time often used the ionosphere to extend their signal range, as certain frequencies reflect off the electrically charged particles like a mirror. But the ionosphere is so variable that it was crucial to monitor the daily changes by sending radio pulse sequences at shortwave frequencies into the sky and seeing how they were muffled or diverted.

The Radio Research Center in Slough keeps detailed records of all this data, which proved a boon to the Reading team. Major and his co-authors studied the ionosphere reaction records between 1943 and 1945, looking for shifts in altitude and electron concentration of the ionization in the upper atmosphere over England that may have occurred in response to the bombing.

They compared that data with historical records of the roughly 152 Allied attacks on Europe during that period. London is closer to Slough, but Major says German bombings during the famous “Blitz” in London were so frequent that they were almost continuous, making it difficult to distinguish which ionospheric effects resulted from the bombings and which could be attributed to the usual seasonal variation.

Major and his colleagues found a marked decrease in electron concentration — a loss of ionization — in the ionosphere around the time of the air raids, likely due to a heating effect of the shock waves produced by the bombings. That’s solid proof of principle for the technique of assessing how the ionosphere changes in response to such events. “The unprecedented power of these attacks has proven useful for scientists to gauge the impact such events can have hundreds of miles above the Earth, in addition to the devastation they have caused on the ground,” Major said.