With morgues full, Texas and Arizona are switching to refrigerated trucks | Techilink 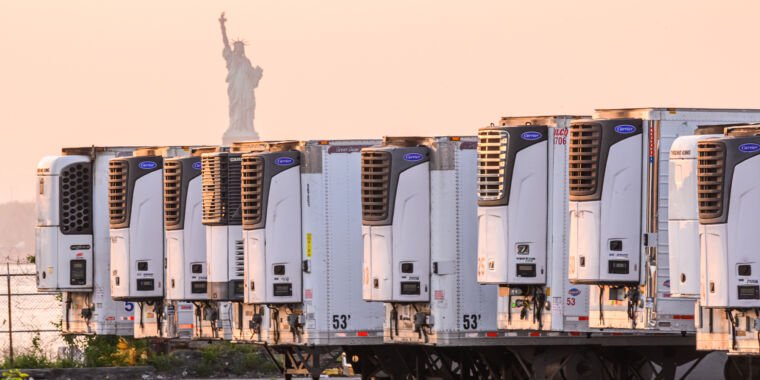 Officials in Texas and Arizona have requested refrigerated trucks to hold the dead as hospitals and morgues become overwhelmed with victims of the raging COVID-19 pandemic.

“In the hospital, there are only so many places to lay bodies,” Ken Davis, chief medical officer for Christ Santa Rosa Health System in the San Antonio area, said in a briefing this week. “We’re out of space, and our funeral homes are out of space, and we need those beds. So if someone dies, we need to turn that bed over quickly.

Overall, Texas is seeing an increase in hospitalizations and deaths among people infected with the coronavirus — and reports of new infections are still coming. On Wednesday alone, the state reported 10,791 new cases, bringing the total to more than 282,000 cases. The state has reported more than 3,400 deaths so far.

Several other areas in the state have ordered, purchased or sought refrigerated trucks or trailers to store bodies. That includes Nueces, Cameron, Travis, Hidalgo and Harris counties, as well as the city of Austin, according to The Texas Tribune.

The picture doesn’t look much better in Arizona, where hospitalizations and deaths are also on the rise. The state, which has more than 134,000 cases and 2,492 deaths, has reached the capacity of 90 percent of its beds for adult intensive care patients. The mayor of Phoenix said late last week that the city is working to secure refrigerated trucks.

A similar scenario could be unfolding in Florida, which is also reporting a record number of cases and deaths. The state has seen record highs in recent days, with more than 15,300 cases on July 12 and 156 deaths today. According to the Agency for Healthcare Administration, about 50 hospitals in the state no longer have beds for adults in their intensive care units.

The grim reality reflects the height of the outbreak in the New York City area earlier this year, which was marked by dozens of refrigerated trucks, some parked outside hospitals. In April, a Manhattan-based ER doctor feared that if our national response to the pandemic didn’t improve, the trucks would become a lasting picture. “Every disaster has its images, its symbols. For COVID-19, it might just be the refrigerated truck. It’s our overcrowded morgue, with the patients we couldn’t save.’

So far, the United States has reported more than 3.5 million cases and 138,000 deaths during the COVID-19 pandemic — more cases and deaths than any other country. The nationwide number of daily cases and hospitalizations is currently increasing.