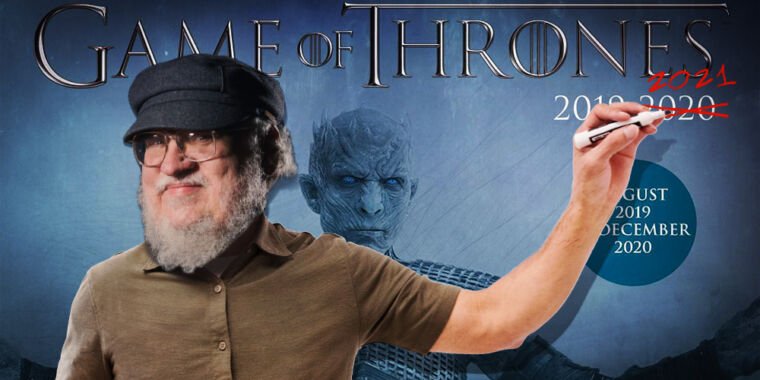 Anyone looking for a pandemic-based silver liner can head to author and producer George RR Martin’s blog, where the creator of the Song of Ice and Fire book series offers new hope for the next installment. Progress continues The winds of winterMartin insisted on Tuesday, and he’s dared to give a hopeful estimate (though, obviously, no release date).

“The enforced isolation has helped me write,” Martin wrote on his amusingly titled “Not A Blog.” He confirms a flurry of progress over the past week, adding up to five chapters for Winds of winterand he points to “long hours every day” and “steady progress” in putting the book together.

Martin then goes on to mention the cancellation of a New Zealand fan convention this year, which he admitted was in a sense a perfect development.

“The last thing I need right now is a long hiatus that could cost me all the momentum I’ve built,” he wrote. “I can always visit Wellington next year [2021]if I hope that both Covid-19 and The winds of winter is being done.”

“Fall back in Braavos”

This estimate comes of course from an author who left So if enthusiasts who have been waiting since 2011 for a sequel to A dance with dragons† Martin had previously told fans he would get the unfinished book ready before HBO went ahead with a sixth season of Game of Thrones† In 2015, he told Entertainment Weekly what steps he would take to make that claim true:

Maybe I’m too optimistic about how quickly I can finish it. But I’ve canceled two conference appearances, I’m turning down many more interviews – everything I can do to clear my decks and make this happen.

That means Martin’s assurances about skipping a convention for the sake of “momentum” may sound hollow to the book series’s remaining devoted fans. Those guarantees may also sound hollow to anyone untouched by the HBO series finale based on: A song of ice and fire. And the announcement comes with a reminder that Martin has a long way to go: “This doesn’t mean the book will be ready tomorrow or out next week.”

Martin’s Tuesday post reminds fans of the other records he’s currently spinning. He cites the progress of the team responsible for HBO’s upcoming prequel series The house of the dragonthen rattles off several productions that he tries to get on big and small screens: a TV series based on a novel by Nnedi Okorafor (who chose HBO in 2017), feature films based on his own short stories and a “relaunch” of the wild cards TV project (which was previously linked to Hulu before going silent).

Interestingly, Martin’s very large list of years old projects does not contain a mention of a Captain Cosmos TV series, of which HBO had an option in 2015. He concludes his list of projects by adding, “there are the secret short films that we do… well, no, if I told you, it wouldn’t be. secret.”

And if you think that all sounds busy enough, you can click back on Martin’s blog for updates on his New Mexico bookstore, his annual donation to a promising sci-fi writer, and his call for justice (which came in) in early June. the form of a quote from Frederick Douglass).

As for Tuesday’s post, fans would be forgiven for focusing on Tuesday’s post Winds of winter-specific commentary, including this anecdote about where his focus was: “Lately I’ve been visiting Cersei, Asha, Tyrion, Ser Barristan and Areo Hotah. I’ll be back to Braavos next week.”