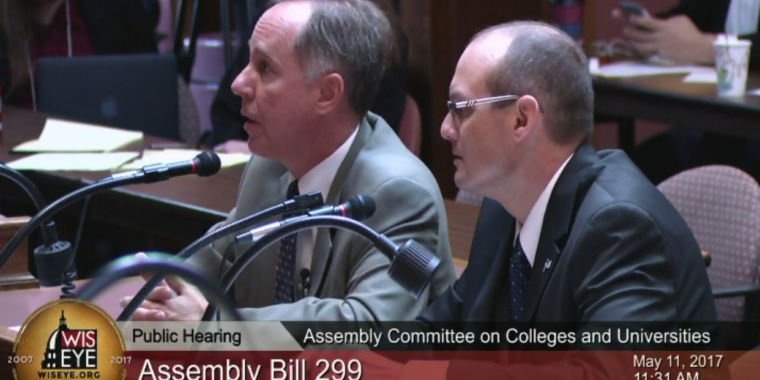 There have been some highly publicized incidents of student groups or other protesters interfering with scheduled performances by right-wing speakers at American universities. In response, a number of states have considered “campus-free speech” bills based on model legislation from the Goldwater Institute, a conservative think tank. Several bills introduce specific penalties for students who demean others’ speech and prevent college administrators from uninviting speakers, to give two examples.

Such a bill is being discussed in Wisconsin. Faculty and university officials across the state are concerned about what else could be prevented by the bill’s overly vague language, the local council said. cap times. As often happens with bills relevant to science education, the debate has also generated some rather bizarre comments from the bill’s sponsors.

While the scope of the bills focuses on public events with invited speakers, there are a few key questions here. University administrators want to know how far this requirement to “remain neutral” extends. For example, the University of Wisconsin-Madison has spoken out against proposed bans on stem cell research on campus. Would the university be breaking this law if it did this again?

And of course, some are concerned that students could use this law to protect themselves from admitting scientific facts that are publicly controversial. When a Democrat asked Republican Representative and bill sponsor Jesse Kremer during a hearing if a geology professor could tell a student who believed the Earth was 6,000 years old that they were wrong, Kremer was shocked. “The earth is 6000 years old. That’s a fact,” he said. (The Earth is empirically just over 4.5 billion years old.)

And while the bill doesn’t target classrooms, Kremer suggested that such a student could potentially file a complaint with a “Council for Free Speech” that the bill would create — a body made up of leaders from each public school and two politicians.

Another Republican sponsor of the bill, Representative Robin Vos, called climate change a “public controversy of the day.” He said: “Probably the biggest debate is global warming. A lot of people think it’s solid science and a lot of people don’t think so. I think both sides should be brought to campus and let the students decide.”

Vos, a critic of state universities who has tried to limit teacher tenure, has complained that most invited speakers are liberal.

The Wisconsin bill has not yet been put to a vote.