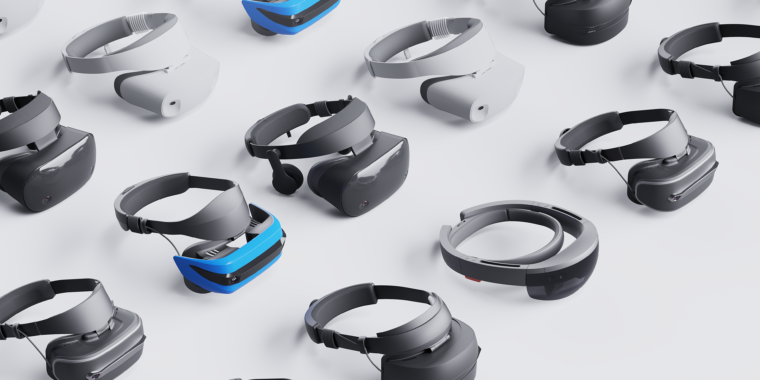 Depending on which analysts you choose to believe, Windows Mixed Reality headsets will either sell strongly, the Oculus Rift at two-to-one and the HTC Vive at ten to fifteen percent in the fourth quarter… a slow start, with VR remains a niche.

On the more optimistic side is market research firm SuperData. SuperData points out the advantages of the Microsoft platform: inexpensive headsets (ranging from $299 to $499) and lower hardware specs (a basic experience works on machines with Skylake-integrated graphics, although more advanced titles require separate GPUs). The Windows headsets’ inside-out tracking also makes installation easier: there’s no need to mount base stations on the wall or anything; just plug in the headset and go.

The Windows platform will also have a good range of content; Microsoft has its own IP, such as: Halo and Minecraftand the platform will also be compatible with SteamVR, giving access to two VR ecosystems with a single headset purchase.

Less positive is IHS Markit. While the features of the Mixed Reality platform are attractive, the company says, virtual reality as a whole remains a niche proposition; it is expected that by the end of the year of the entire range of Windows headsets – HP, Dell, Asus, Acer, Lenovo and Samsung will all have devices – only 280,000 will have been sold.

Both firms pointed to some confusion around Microsoft’s “Mixed Reality” terminology. As a developer-focused platform, “Mixed Reality” is a sensible term to use: Microsoft’s APIs support a wide variety of devices and usage scenarios. These include not only the virtual reality headsets that go on sale later this month, but also augmented reality hardware such as HoloLens and augmented reality applications through the camera (think of pokemon go, but better) on tablets, PCs, or even phones. When talking to developers, it makes a lot of sense to emphasize this depth and variety and encourage them to think about the full range of scenarios.

But as a consumer-oriented term, “Mixed Reality” is useless at best. “Virtual reality” is terminology that is understood, and that’s what the headsets deliver. In fact, that’s all they provide; although the headsets contain integrated cameras, those cameras are black and white and are used solely for positional tracking. They are not the right hardware to provide augmented reality through the camera. You might imagine building virtual reality headsets with the right cameras — with the right field of view and positioning — to provide augmented reality, but these first-generation Windows headsets aren’t.

It remains to be seen how Microsoft will actually bring Mixed Reality to market, but with the hardware that will be available and the understanding of the term “virtual reality,” the company would arguably be wise to quietly ignore the term “MR.” and stick to “VR” when presenting these things to consumers.

While the spider is a little different, these two predictions may not be completely at odds with each other. SuperData estimates that 240,000 Rifts and 420,000 Vives were sold in the first eight months of their availability in 2016. 280,000 Windows headsets in about two and a half months would simultaneously mark a much stronger start than the Rift and Vive have experienced, while still being a niche product in absolute terms. Compare it, for example, to another product that’s also proving niche appeal: Microsoft’s original Kinect saw over 8 million sales in its first two months, over 10 million sales after three months on the market. This gives the Windows MR headsets plenty of room to beat both the Rift and Vive, while still remaining a rarity.