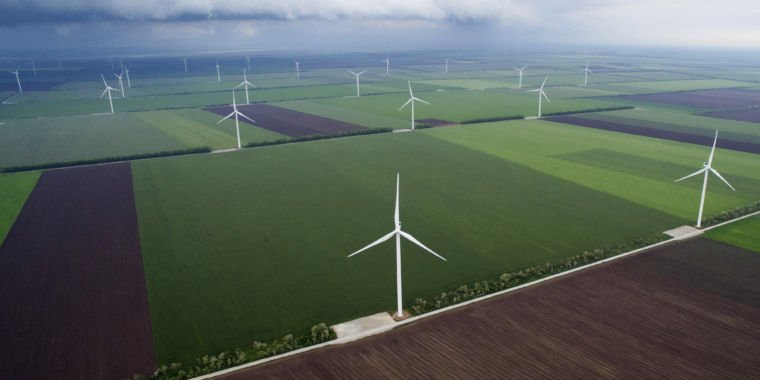 Danish company Vestas Wind Systems is one of the largest wind turbine manufacturers in the world and has recently surpassed GE’s market share in the US. But as the wind industry becomes more competitive, Vestas seems to be looking for ways to solidify its lead by offering something different. Now the company says it is looking into building wind turbines with on-site battery storage.

According to a Bloomberg report, Vestas is working on 10 projects that will add storage to wind installations, and Tesla is collaborating on at least one of those projects. Vestas says the collaboration between the two companies is not a formal partnership, and Tesla has not commented on the nature of its work with Vestas. But efforts to combine wind turbines with battery storage offer a glimpse of how the wind industry could change in the future.

The Vestas news is just one data point in a summer of wind and storage project news. In August, offshore wind developer Deepwater Wind announced it would link a 144 MW offshore wind farm planned off the coast of New Bedford, Massachusetts, to a 40 MWh battery storage system from Tesla. Construction on that project will end sometime in 2022. According to GreenTechMedia, Spanish wind energy company Acciona recently connected two lithium-ion batteries from Samsung to a 3 megawatt turbine in Spain, Dong installed a battery on the UK coast in June to store some offshore wind energy, and Statoil will install a 1 MWh lithium ion battery in its designs for a floating offshore wind farm to be completed by the end of 2018.

The idea of ​​on-site batteries isn’t new: GE’s renewable energy arm introduced short-term batteries integrated into wind turbines in 2013, and Vestas itself experimented in 2012 with connecting storage to wind turbines. their wheelhouse lately and contact battery specialists instead of pushing to build batteries yourself.

At first glance, the appeal of batteries seems obvious: the cost of wind energy is falling rapidly, prompting energy companies to install wind capacity at a record pace in the US as well as in China and the EU. While government subsidies for renewable energy have played a role in the wind boom, developers are just starting to submit proposals for wind projects that don’t need a subsidy to be profitable. But to make wind even more competitive, it must make up for one glaring drawback: wind turbines cannot generate electricity on demand.

That’s where batteries come into play. Installations from AES Energy Storage and Tesla have already hit California power grids, but those systems aren’t tied to a specific renewable source — they store electricity from both coal-fired power plants and solar panels. But proposing a wind farm with on-site storage may lead a grid operator to consider that proposal as a more reliable source of energy.

However, the limiting factor is the storage price. A post from the American Wind Energy Association (AWEA) explains why storage historically hasn’t been a big part of the equation.

That’s because, says the AWEA, flexibility in the form of fast-growing gas plants or hydropower already exists on most major grids, and “it is almost always much cheaper to use this flexibility than to build new sources of flexibility, such as facilities for energy storage. ”

But the economics of storage may be changing, or at least companies predict enough change in the next five years to justify getting their feet wet on special projects like this. According to Lazard’s 2016 Levelized Cost of Storage report, projections show that the capital cost of chemical battery construction will become much cheaper through 2020, while more traditional storage methods, such as compressed air and pumped storage, will remain essentially the same.

And in a statement to Bloomberg on Friday, Vestas said so too, noting that the impetus for his 10 projects was to “find sustainable energy solutions that can reduce energy costs.”