Will SARS-CoV-2 have a long-term effect on climate? | Techilink 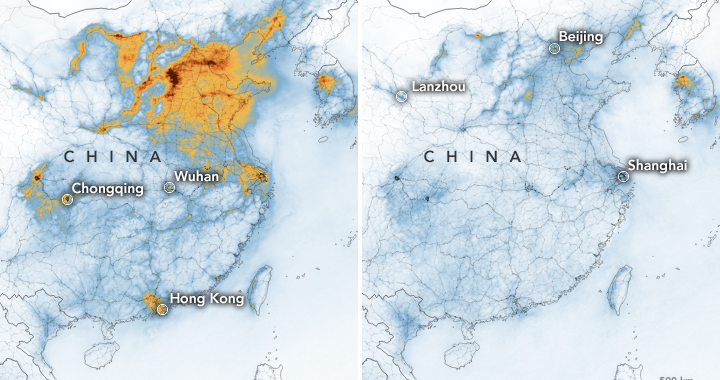 The shutdown of manufacturing and transportation in Hubei province has led to a drop in air pollution levels across China so dramatic — emissions were estimated at 25 percent — that the relative lack of both nitrogen dioxide and carbon dioxide in the air can be seen. from space. Most of the effect came from a sharp decline in coal combustion, which still supplies most of China’s energy. Coal is used there to heat houses in the countryside, but also to fuel power plants and industry.

However, pollution — like the virus itself — may roar again after the lockdowns are lifted. This “revenge pollution” could easily negate the temporary drop in emissions we are now seeing. That’s exactly what happened in China in 2009, when the Chinese government responded to the global financial crisis with a massive stimulus package that funded large-scale infrastructure-like projects.

Similar emissions reductions were seen in the US. Fewer people commute, but they could use some of the energy they save by heating or cooling the homes they currently work in and buying nonsense online. As in China in 2009, efforts to restart the economy here will probably not be the top priority for environmental care.

There are already alarming indicators that COVID-19 will serve our government as a distraction from their agenda that denies (and promotes) climate change. On March 18, they held an oil and gas lease sale in the Gulf of Mexico. Trump is pushing environmental rollbacks, some of which require a 30-day comment period (there can’t be any public hearings because of the virus). If you have other things on your mind for the next month, sorry. And perhaps most disturbingly, the EPA has relaxed its environmental standards, along with the requirement of oversight to ensure those standards are met, essentially giving companies the ability to legally pollute air and water with impunity.

The massive cancellation of flights and international conferences could lead to a reduction in airline carbon emissions, and it could even linger. All the way back in the halcyon days of 2016, 192 countries agreed in a UN brokered deal to keep airline emissions at 2020 levels, whatever that may be. If they pass, the airlines will have to make up for the difference by funding green projects.

Now they can be held to this artificially reduced level of emissions caused by the meddling of COVID-19 in everyone’s travel plans. And if people learn from this experience that they don’t have to fly as much as they thought, then airline emissions may stay low. There was talk of “abnormal levels” in 2020 in the original agreement, so it’s unclear how this will play out. But air travel is only responsible for about 2.5 percent of global emissions.

Because many companies are closing or scaling back drastically, their demand for power is falling. That could be good news, as their demand for fossil fuels will decline. But their demand for renewable energy is also falling. And when these companies pick up again, some may keep their clean energy commitments. But others may not. The solar industry has already had to scale back, both due to dwindling demand and because the solar panel supply chain is moving back to China.

Complicating matters even more is that the sudden drop in gas mileage comes in the midst of an oil price war. If prices remain low, they could lead to the purchase of less fuel-efficient cars once restrictions are lifted.

In addition to the direct environmental effects, environmental research is also difficult because non-essential employees have to stay at home. Experiments that have been going on for years, taking sea, air and soil samples and drilling ice cores around the world, are being halted or at least interrupted. As long as this continues, we will have major environmental data gaps. And after that, researchers fear their money for further environmental studies will dry up because they haven’t published results.

So in the end, will COVID-19 be good for the environment or bad? The US Energy Information Administration’s last Short Term Energy Outlook was published on March 18 – so actually a lifetime ago – and is therefore unmentionable. Their next forecast, due on April 7, will include their first estimate of the impact of the pandemic on emissions and oil prices. But as with many things about the virus — the death toll, for example — we won’t know the ultimate effect on climate until the pandemic runs its course. And as with the virus’s effect on human health, the ultimate effect on the climate depends largely on how governments deal with it.

This global crisis is forcing us – cruelly and against our will – to rethink some of our propensity for harmful behavior. Hopefully, we can seize this collective opportunity to reassess as a society whether we really need to reboot them.