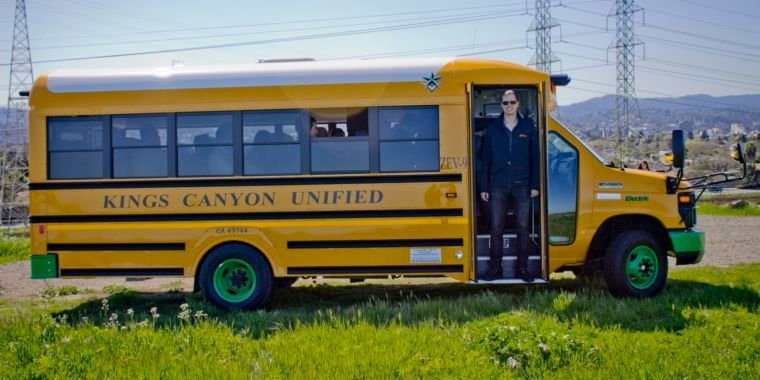 School bus driver Jenifer Chiodo takes a moment to admire the orange-pink sunrise as she prepares to spend the next several hours on the roads. Then she grabs her clipboard and notes the date, her name, and the mileage on the odometer before starting the engine of a Thomas Built Type-A “minibus” owned by her employer, First Student Inc.

Chiodo drives approximately 21 miles on her two morning routes and 40 miles on her four afternoon routes, carrying only one or two special needs children at a time through the suburbs of Rocky Point, New York. A Type-A bus only gets nine to ten miles per gallon, and Chiodo says she’s come to realize how unsustainable and unhealthy her driving can be.

“I don’t even want to think about how much carbon my canister spews into the air every day and how it warms the atmosphere,” says Chiodo. “Children breathe exhaust fumes, I breathe exhaust fumes… I’d love to help get these students to school, but I wish there was a safer and more environmentally friendly way to do this.”

Too much, magic bus

As it turns out, there may be a better way — and it’s being trialled just 40 miles west in another Long Island town. Copiague Public School District bus drivers are testing an electric version of Chiodo’s Type A bus. Last August, the district quietly added the all-electric vehicle to its fleet of traditional fossil-fuel school buses, becoming the first in the state to do so. The district says that its choice to go electric is in line with its objectives of sustainability and safety.

American school buses use an estimated 822,857,143 gallons of diesel and gasoline per year. Fully electric school buses emit zero emissions while running and they have the potential to significantly reduce the country’s use of fossil fuels and thus its contribution to climate change. Proponents of electric vehicle technology argue that traditional gasoline and diesel school buses are far from safe, emitting toxic emissions while relying on a body design that puts them at a higher fire risk than other types of vehicles.

“Compare an electric battery placed low between the bus frame rails, away from impact, with a 50-gallon tank of highly flammable material sitting right under children during the ride,” said Jim Castelaz, CEO of the in California-based Motiv Power Systems, a company that makes the electric powertrain on which electric school buses and other vehicles are based. “It’s crazy to think we’re doing this.”

According to the National Fire Protection Agency, between 1999 and 2003, the most recent years for which data is available, an average of six buses – including school buses – were on fire every day. Instead of gas tanks, electric buses have batteries. While some lithium batteries have notably caught fire, electric buses use batteries made with a sodium-nickel or lithium material that solidifies on impact to prevent fires that can be caused by leaking acid.

Thruppence and sixpence every day

The health benefits for people and the environment of electric school buses are clear. But electric school buses cost about $200,000 to $300,000 per bus, as opposed to just $65,000 to $85,000 for a bus powered by fossil fuels. For many school districts, the only concern seems to be cost-effectiveness.

In addition, many school districts close part or all of their bus fleet on weekends and summer, unlike municipal buses used for public transportation, which often run all day, 365 days a year. So while electric driving in widely used city buses offers some return on investment, electric school buses have not yet reached that point. They are simply not used enough to offset their high cost, according to Fraser Atkinson, president of Green Power Motor Company, Inc.

But he suggests that this shouldn’t deter school districts from buying electric school buses, especially in cases where a particular bus or group of buses will see a lot of use. For example, school districts use Type-A school buses more often than the long “classic” Type-C buses. As with Chiodo, their drivers often run multiple routes a day to transport only a few students at a time, such as students with special needs who attend separate schools. When as many journeys as possible are driven with an electric bus, school districts achieve a higher return on investment.

While finances are questionable, rebates, which lower the overall cost of purchasing electric school buses, are a major deciding factor in whether districts adopt or not. California and Quebec are seeing the popularity of electric school buses rise as local legislators have developed a set of discounts, regulations and infrastructure that have made the technology more cost-effective.

But school districts in New York and Chicago, the latest regions to introduce electric school bus discounts, have been slow to embrace them. These are environmental and health advocates who want petrol and diesel school buses to be replaced as soon as possible. But transportation experts say the only way electric school buses can be used more widely is if school districts push for discounts.

“Electric school buses have the potential to reduce the harms of pollution to schoolchildren and communities while reducing exposure to the volatile price of petroleum fuels, which can wreak havoc on municipal budgets,” said Luke Tonachel, director of the Clean Resources Defense. Council. Vehicles and Fuels Project. “School districts should try to work with their local utility to create programs that can make electrifying their buses a cost-effective solution.”

Erica Cirino is a New York-based freelance science writer. She covers wildlife and the environment, specializing in biology, conservation and policy.