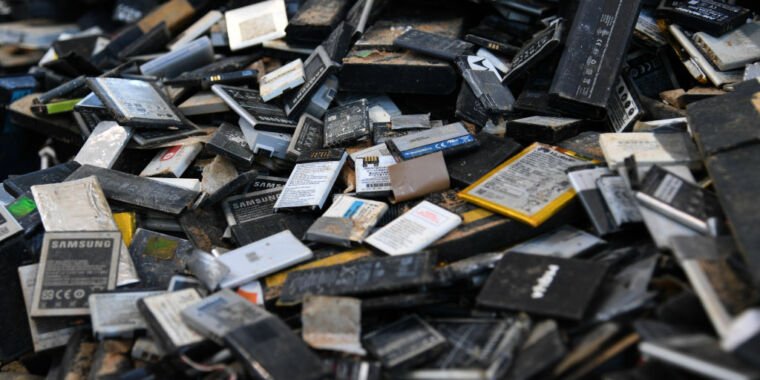 Tesla co-founder JB Straubel has been funded by Amazon for Redwood Materials, a start-up that aims to extract lithium, cobalt and nickel from old smartphones and other electronics for reuse in new electric batteries.

Redwood is one of five companies Amazon is investing in as part of its $2 billion Climate Pledge Fund announced this year.

Jeff Bezos, the CEO of Amazon, said in a statement that this first group of companies is “using their entrepreneurial energy to help Amazon and other companies reach net zero by 2040 and keep the planet a safer place for generations to come.”

Mr. Straubel, Tesla’s chief of technology from 2003 to last year, founded Redwood in 2017 after seeing that the global shift to electric vehicles is likely to cause unnecessary environmental damage from a mining wave.

His vision is a “world where all transportation is done by electric vehicles and we have batteries that power a sustainable world,” he told the Financial Times. “And all those batteries can be recycled and remanufactured many, many times over, so we can have a nearly closed loop.”

Redwood has fewer than 100 employees, but has already attracted $40 million in investment from Capricorn Investment Group, a sustainability-focused venture capital firm, and Breakthrough Energy Ventures, an environmental fund backed by Mr. Bezos, Bill Gates and several other billionaires, primarily from the world of technology.

“There is a phenomenal amount of mobile phones in the world that are currently being thrown away as garbage or thrown into landfills,” said Mr Straubel, who estimates the number at nearly 1 billion a year. “It’s a huge untapped resource… If we can recover and reuse 98 or 99 percent of those materials, we don’t need a lot of new material to keep that whole process going.”

When batteries are used repeatedly, they eventually die, but Mr Straubel explained that the underlying elements were essentially sealed off from the environment, allowing them to be broken down and reused.

“Even though the battery is internally degraded… all the same materials are still there — all the same atoms of lithium, nickel and cobalt,” he said. “You can still use all those same materials, but they have to be reprocessed… and brought back to a state where they can be reused and built into a new battery.”

Mr Straubel declined to say how much Amazon invested, but said there is “potential for collaboration on a number of different levels”. This may include helping Amazon establish an end-of-life process so that consumer electronics sold through Amazon can be reused.

Redwood last year launched a partnership with Panasonic to reclaim the scrap it generates when it makes battery cells at Tesla’s Gigafactory in Nevada.

Rivian, the electric truck maker Amazon previously backed, is also part of the new investment round. The other three companies are less well known. They are Carbon Cure, which uses recycled CO2 in building materials; Turntide Technologies, maker of a software-driven energy-efficient motor that is being tested at Amazon’s facilities; and Pachama, a computer vision company that tracks the progress of its carbon offset commitments by analyzing satellite imagery.

“We can look at these images and use algorithms to determine whether the carbon sequestration claims are correct or not,” said Diego Saez Gil, chief executive of Pachama.

Mr. Saez Gil declined to disclose the total amount of Amazon’s funding, other than that it was part of a $5 million round led by Breakthrough Energy Ventures.

Amazon’s much-discussed efforts to reduce its environmental impact, including renaming the Seattle ice hockey arena, have collided with the reality of meeting the intense shopping demand in the wake of Covid-19, and the long-standing Mr Bezos’ obsession with aggressively reducing delivery times.

In 2019, Amazon’s overall carbon footprint increased by 15 percent compared to 2018. At 51.2 million tons of carbon dioxide equivalent, Amazon’s emissions last year were comparable to 13 coal-fired power plants operating for 12 months, according to a comparison tool from the U.S. Environmental Protection Agency.

Amazon has said it will be a net-zero carbon company by 2040, a decade ahead of the Paris agreement goal. That effort includes ordering more than 100,000 vans from Rivian, to be rolled out by 2030 at the latest. Rivian’s first batch of electric vans will deliver parcels from next year.