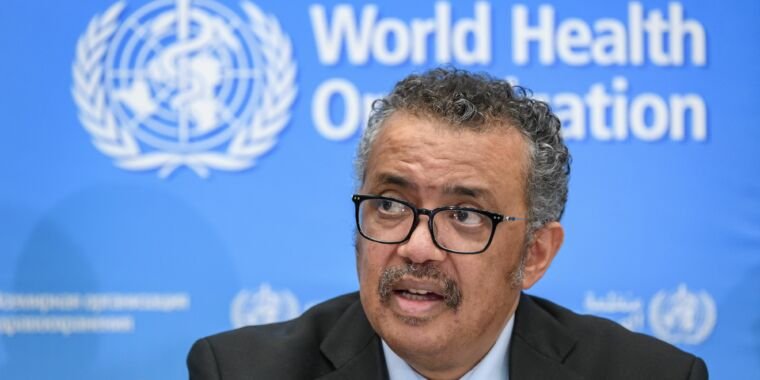 As outbreaks of the new coronavirus flared up in several countries outside of China, experts from the World Health Organization tried Monday to contain media fears and speculation that the public health emergency will turn into a pandemic.

“I have consistently spoken about the need for facts, not fear,” WHO Director-General Tedros Adhanom Ghebreyesus said in a news conference Monday. “Using the word ‘pandemic’ now doesn’t fit the facts, but it can certainly create fear.”

As always, the director general (who goes by Dr. Tedros) and his colleagues at WHO tried to divert the conversation from speculation and worst-case scenarios. Instead, they want to focus on data and preparation. In doing so, Dr. Tedros, however, notes that some of the latest figures on the epidemic are “deeply concerning.”

Since last week, officials have reported a rapid increase in COVID-19 cases in several countries, namely South Korea, Iran and Italy. On Monday, February 24, South Korea confirmed 763 cases and seven deaths — a dramatic increase from the 30 cases and zero deaths it had counted just a week ago.

The situation in Italy also went from three cases early last week to 124 confirmed cases and two deaths on Monday. Iran went from zero to 43 cases in the same period and has reported eight deaths.

The numbers have sparked many media reports over the weekend speculating whether the new coronavirus outbreak is or will become a pandemic. For now, said Dr. Tedros, isn’t it.

“Our decision on whether or not to use the word ‘pandemic’ to describe an epidemic is based on an ongoing assessment of the geographic distribution of the virus, the severity of the disease it causes, and the impact it has on society as a whole,” he explains. † “Right now we are not witnessing the uncontrolled global spread of this virus, and we are not witnessing large-scale serious illness or death.”

dr. Tedros summarized some of the most recent case and disease data from China, noting that cases are on the decline there and have been declining since Feb. 2.

In Wuhan, where the outbreak began in December, the death rate from COVID-19 appears to be between 2 and 4 percent. US experts have noted that this high death rate may be due in part to the city’s health systems being extremely overwhelmed by the outbreak and facilities being short of medical supplies.

Outside of Wuhan, the death rate from COVID-19 in China is about 0.7 percent, said Dr. Tedros. But many public health experts have suggested that even that figure may be higher than the true death rate, as many mild, non-fatal cases may not have been counted. If counted, they would dilute the death toll, leading to a lower death rate.

For those with mild infections — which is more than 80 percent of cases, according to Chinese data — recovery takes about two weeks. More serious infections can take three to six weeks to recover.

dr. Tedros also reported that the coronavirus itself does not appear to be mutating.

“The most important message that should give hope, courage and confidence to all countries is that this virus can be contained,” said Dr. Tedros on the latest review from China.

“Does this virus have pandemic potential? Absolutely, it has. Are we there yet? According to our assessment, not yet.”

Tomorrow, a team of experts from WHO and China will unveil more details about a technical report on the situation, including 22 recommendations on how best to handle the epidemic.

As of Monday, there were more than 79,400 cases worldwide, with 2,622 deaths. The vast majority of cases and deaths occur in China. About 2,100 cases and 23 deaths are spread across 31 countries outside China, as well as the Diamond Princess cruise ship docked in Yokohama, Japan.

All cases in the United States to date have been related to travel or have been in people repatriated from outbreak areas and therefore already considered high risk.

The risk to the general American public is still considered low at this point. However, the CDC has said it expects cases to continue to be identified and spread in the community could occur. The agency says it is working with state and local health systems to prepare for that opportunity.