Who soiled the toilet? is your next party game (about pooping on the floor) |Techilink 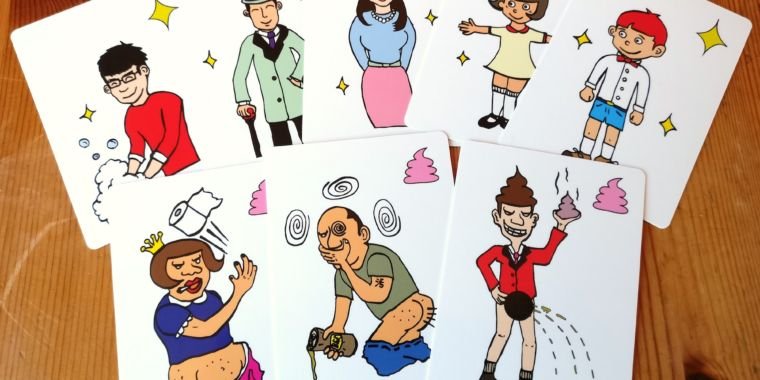 The Japanese have a reputation for appreciating the toilet. The poo emoji is a creation of them, as it is Everyone poops— that famous children’s book you almost certainly read like a young ‘un’, when their TV comedies have a reputation for being heavy. Japan is also home to those space-age restrooms with heated seats and two dozen bidet settings, and it’s the birthplace of this tasty dessert treat.

So it should come as no surprise that, when we toured the Essen gaming fair, the largest board game fair in the world, last October, our attention was drawn to a Japanese game called Toire o Yogoshita now Dareda? (Or, in English, Who soiled the toilet?). Of course we had to try it.

This is a bluffing game, where two teams – the Clean Freaks and the Dirty Devils – compete against each other in a battle of wits to keep a toilet clean…or to secretly dirty it all.

The first thing you notice is the game’s unique art style. The box itself is a flat cylinder, drawn like a toilet – a fact that will become important in due course. The rest of the components, a bundle of cards and (poo) chips, come in, well, a big wad of what we assume is authentic Japanese toilet paper. The cards are charming, albeit crassly illustrated in an old-fashioned manga style, with the chips a particularly evocative shade of brown.

The story, as it is, revolves around a new breed of people stalking the land, inconsiderate of their bowel movements. “Actually,” the game’s explanation reads, “it’s not just that they don’t have the thoughtful soul, but the fact is that they are a crazy breed that really enjoys creating dirt while pretending to be ordinary clean people, so they can babysit at the party. It’s not ideal, but let’s all join in and help maintain the state of the toilet until the party is over!”

The game is very similar to the classic social deduction game The resistance, but without the ominous nerdy art. (Those with a Board Game Geek account can download a copy of the English Rules here.) The Clean Freaks are noble types who wear smartly dressed coats and top hats, or else they’re well-behaved kids who absolutely eat their veggies. The Dirty Devils are mischievous types who don’t seem to care what becomes of their garbage. One of them is wearing a poo hat, not a totally unheard of fashion statement in Japan.

“Sometimes you just want to relax with a board game about deliberately defecating on the floor, you know?”

In each round, the “leader” appoints a certain number of other players to leave the table one by one and in a certain order to “answer nature’s call”. Other players vote to accept or reject these choices. (After all, the leader may be one of the Dirty Devils!) The selected players then go to another room – the game suggests using your own bathroom – and check the condition of a toilet card. It starts clean side up, but Dirty Devils have the option to flip it over to ‘dirty’. The secret team of phantom poopers – who know each other’s identities inside out – have to make a mess without getting caught, so they can’t be too obvious when they’re doing this.

If the toilet is clean at the end of a round, the Clean Freaks score a point; if not, the Dirty Devils take one. The first team to three wins.

This is not only a reskin from The resistance, however. There is also an action round in it Who soiled the toilet?, and it adds a dexterity component to the procedure. Everyone can take turns turning their nut brown poo chips on the lid of the box.

The Clean Freaks naturally want to get their trash into the bowl, because that’s the essence of their nature. But Dirty Devils do look like they want their garbage in the bowl so they have to try to miss the jar “accidentally”. They can even try to knock other people’s poo tokens off the throne. After a few beers and some punishing mind games during previous rounds, this extra skill element is extremely funny – and surprisingly difficult – but it probably isn’t of a depth to inspire tournament play.

So it’s all a little different, and the theme is definitely what makes the game. I cast no shadow on its illustrious predecessor; there’s definitely a time and a place for sci-fi ninja women to wear cybernetic push-up bras – but sometimes you want to relax with a parlor game about intentionally pooping on the floor, you know?

Who soiled the toilet? is for those with friends who might fancy a fun bluff game but are put off by pictures of futuristic aristocrats in weird space dresses. Poop is hilarious by nature, and there’s a certain mischievous innocence to the humor here that makes a game about dropping your guts even funnier. And that’s totally fine – not every board game has to be the next cardboard burger Kane.