White dwarf flies around a black hole every 28 minutes | Techilink 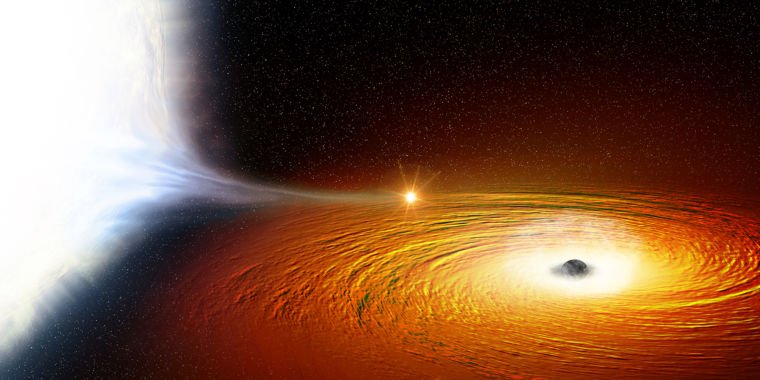 In a study based on new observations from the Chandra X-ray Observatory, NuSTAR and Australia Telescope Compact Array, a team of researchers may have confirmed the presence of a black hole and a white dwarf star in the tightest orbit ever seen.

The system was observed in the 47 Tucanae globular cluster, located about 16,700 light-years away in our own galaxy, and is the second brightest globular cluster in the night sky. It is also the site of the recent discovery of the first medium-mass black hole found to date. It is fertile ground for studying the role of black holes in globular star clusters.

The system in question, 47 Tuc X9, is the brightest X-ray source in the core of 47 Tuc. Researchers initially thought the most massive component might be a so-called catastrophic variable, a system whose brightness regularly waxes and wanes. This occurs in a binary star pair in which material from the donor star (typically a white dwarf) falls onto the more massive (roughly solar mass) star, leading to increased emissions.

The new study finds, based on the system’s X-ray and radio emissions, that it’s something else entirely: X9 doesn’t look like a catastrophic variable should. “X9 would be extremely unusual among [cataclysmic variables] in its radio flux, its X-ray flux and its ratio of X-rays to optical flux. X9 is said to have the highest radio flux of any observed [cataclysmic variable]”, the researchers write in their paper. There are scenarios that could still be envisioned to produce the same observations with special types of catastrophic variables, but the researchers conclude those are “extremely unlikely.”

Instead, the radio emissions suggest that the primary component is likely a stellar-mass black hole. That leaves the question of the identity of its companion, the donor star.

A 2015 study suggested that X9’s less massive body could make a full orbit around the black hole in about 25 minutes. The new study agrees with that result: The researchers note a periodic variation in the X-ray brightness of the system that takes about 28 minutes to go through a cycle. As the researchers discuss other possible causes of this periodic behavior, they conclude that the most likely explanation is that it is the donor star’s orbit around the black hole.

If so, that’s an absurdly fast trajectory, meaning the star must be flying around the hole at incredible speeds – on the order of 12 million km/h. To do this, the star would have to orbit the Earth just 2.5 times the distance between the Earth and the Moon. This donor star is almost certainly a white dwarf; anything more massive, like a Sun-like star, wouldn’t be able to sustain an orbit this close to its black hole.

The researchers ran computer simulations to analyze the spectral lines in the X-ray light coming from the star. They concluded that some of the X-rays are absorbed by a pocket of oxygen-rich material surrounding the black hole. That would be material that has leached from the donor star and falls into the black hole. This provided further evidence that the hole’s companion is a white dwarf. Ordinary, Sun-like stars are made up mostly of hydrogen or helium, but white dwarfs — long since burned out of their hydrogen or helium fuel — are rich in heavier elements. The gas around the hole lacks hydrogen, but appears to have oxygen.

Because the white dwarf loses so much mass, it could eventually grow to the size of a planet. The mass loss may not stop there: it may eventually evaporate completely, devoured by its black hole companion. Alternatively, the loss of mass could allow the companion to accelerate to a more distant orbit, where power supply would cease.

47 Tucanae is an example of a globular cluster, a blob of stars orbiting our galaxy. If X9 turns out to be a black hole, that would be unusual. Although many black holes have been discovered in binary systems throughout the galaxy, they usually do not appear in globular clusters.

According to recent computer simulations (before the current study), the answer is no: some black holes should remain in their clusters to this day, perhaps a dozen per cluster. This suggestion prompted researchers to look for them again observably, and they turned up a handful of candidates in globular clusters in the Milky Way and other galaxies.

One way to find black holes is through the X-rays they emit. The problem is that a globular cluster like 47 Tucanae contains many known X-ray sources, including several X-ray binaries (systems with two stars or black holes). Many of these have been investigated and so far found to have neutron stars as their heavier components, rather than black holes.

“This was an exciting find because we found compelling evidence that the companion is a white dwarf and could even show what the white dwarf is made of,” Arash Bahramian, the paper’s lead author, wrote in a blog post. “And if it does indeed contain a black hole, future gravitational wave observatories may be able to detect radiation from this fascinating binary.”