Where has the water of Mars gone? Perhaps in the interior of the planet | Techilink 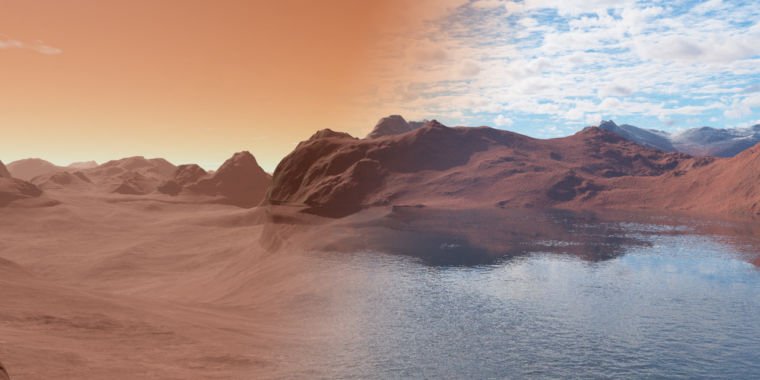 Part of our fascination with cold and dry Mars is its warm and wet past. What was Mars like when it had liquid water? Did life swim in it? And where did the water go?

The most obvious explanation for that last question is that Martian water slowly diffused into space. Because Mars is significantly smaller than Earth, its interior cooled much faster. When the Red Planet’s magnetic field died away about 4 billion years ago, the loss of this atmosphere-protective shield would have allowed water vapor to escape.

But that’s not necessarily the whole story. Estimates of Mars’ initial water supply generally exceed estimates of how much would have escaped to space this way. What didn’t go up may have gone down – below the surface of Mars.

Mars has water ice in its polar caps, and in some areas it may have layers of ice just below the surface. But it’s the foundation of Mars that a group of researchers led by Jon Wade of the University of Oxford pondered.

On Earth, rocks carry down some surface water, largely due to plate tectonics. But that water eventually rises again. That’s because rising temperature and pressure at greater depths free water from its mineral bonds, where it can trigger the production of magma that carries it toward volcanic outlets. In this way, water generally avoids plunging too deeply into the confines of the Earth’s interior.

Mars probably cooled too quickly to develop much plate tectonics, but that’s not the only difference that’s important here. A higher availability of oxygen during the formation of Mars accounts for the fact that basalt (lava flows) on Mars has a slightly different iron chemistry than its terrestrial counterpart. Couple that with the fact that temperature increases more slowly with depth, and Martian rocks can interact with water very differently.

When Earth’s basalts absorb water into their minerals, the density decreases, and these somewhat “floating” rocks are unlikely to sink too deep. But the chemistry difference in Martian basalts largely negates the buoyancy, even if it allows them to absorb more water. And the different geothermal gradient allows water to eventually match minerals at deeper depths.

So the researchers envision the process as follows: Martian lavas form layers of basalt that absorb surface water over time. The eruption of more lava layers on top gradually buries older layers and pushes them deeper and deeper. When the strata descend far enough, the temperature eventually reaches the melting point for some of the minerals in the rock. But after those minerals begin to melt and separate from the still-solid rock, some of the water ends up in the still-solid part — which becomes denser in the process. At that point, the water is effectively trapped in the Martian mantle.

Modeling this process shows that at least twice as much of Mars’ mantle could now contain water compared to Earth’s. So it may be that the water that didn’t escape to space was instead trapped by the red planet’s mantle.

This illustrates how fairly small differences – a smaller planet cooling faster and starting out with a bit more oxygen in its elemental mix – can have huge implications for a planet’s evolution. Earth’s geology kept the water close to the surface, while Mars probably pulled it down and trapped it. Today one planet is blue and the other is red.