When the medium matters: the mighty mantis shrimp pulls its punch in midair | Techilink 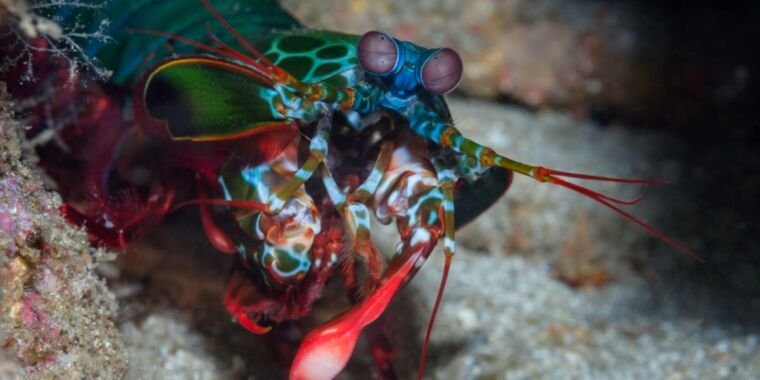 The mantis shrimp is famous in the animal kingdom for its fast, powerful hammer blow, similar to the force generated by a .22 caliber bullet. You could conclude that those attacks would be even faster and more formidable in the air, given the lower density and less resistance of the medium. But that’s not the case, according to a recent article in the Journal of Experimental Biology. Instead, scientists found that the animal hits the air at half the speed, suggesting that the mantis shrimp can precisely control its striking behavior depending on the surrounding medium.

Mantis shrimp come in many different species: there are about 450 known species. But they can generally be grouped into two types: those that stab their prey with spear-like appendages (“spear pins”) and those that smash their prey (“smashers”) with large, round, and hammer-like claws (“raptorial appendages”) Those attacks are so fast — up to 23 meters per second or 51 mph — and powerful that they often produce cavitation bubbles in the water, creating a shock wave that can serve as a follow-up attack, stunning and sometimes killing prey. Sometimes a blow can even produce sonoluminescence, with the cavitation bubbles producing a brief flash of light as they collapse.

According to a 2018 study, the secret to that powerful punch doesn’t seem to come from bulky muscles, but from the spring-loaded anatomical structure of the shrimp’s arms, similar to a bow and arrow. The shrimp’s muscles pull on a saddle-shaped structure in the arm, causing it to bend and store potential energy released by swinging the club-like claw.

Kate Feller, a co-author of the recent study who is now at the University of Minnesota, conducted a physiological study of mantis shrimp in the lab while still at the University of Cambridge in the UK. The creatures really don’t like those controlled conditions and tend to lash out, especially when exposed to air. Feller figured out how to hold the shrimp so that their gills remained submerged, even though the appendages they attacked with were exposed to air. Her Cambridge colleague and co-author, Greg Sutton, visited her lab one day and casually said it might be interesting to measure the force of the shrimp’s hammer blows in the air. And so this latest study was born.

Feller and her collaborators experimented with six female and one male mantis shrimp. To check for any variation in body position, each shrimp was partially held on a gimbal platform in an aquarium partially filled with seawater. Thus mounted, the animals were placed in the aquarium, sometimes completely submerged, sometimes partially.

The scientists then gently poked each shrimp in the rear with a fiberglass stick to make it take a defensive lunge, while using high-speed video to capture the movement. And no, the shrimp didn’t appreciate being poked. “I have a pretty epic photo of my bleeding hand over a white sink when someone stabbed me in the process,” Feller said.

In all, the team analyzed 31 attacks in the air and 36 attacks in the water. Feller had expected the blows in the air to be just as powerful, if not more powerful, but the analysis showed just the opposite. The attacks were half as fast, averaging about 5 meters per second or 11 mph. In fact, Feller et al† noted in their article that the kinetic energy output of the mantis shrimp in air is comparable to that of a grasshopper’s leg, while the shrimp could reach 10 times the power when struck in water.

Why could this be the case? brighter et al† think it may have to do with the need for some sort of shock absorbing ability, pointing out that the limbs of grasshoppers and similar jumping insects have built-in structures to absorb excess kinetic energy. A 2012 study found that the mantis shrimp claw is also good at absorbing energy, thanks to an inner layer made of chitin (often found in the shells of crustaceans), calcium phosphate (found in human bone) and calcium carbonate. A 2016 paper by the same group found that the outer layer of the claw also contained chitin fibers, surrounded by calcium phosphate, arranged in a precise herringbone pattern.

True, some of the excess energy is also released to the target, such as hard snail shells, for example. But this latest study indicates that the medium may also contribute to shock absorption. “The surrounding medium and the target of attack act together as external shock absorbers to mantis shrimp attacks,” the authors wrote.

In other words, perhaps water is better at dissipating the excess kinetic energy produced by the blows so that the shrimp don’t have to punch as hard as they would when hitting the air. “In the air, not only are the resistive forces of water absent, but the whole sensory experience is confused,” Feller said. “So maybe — in the absence of a perceived target — the animals don’t give it full force, so they don’t blow out their joint.”