When flatworms go into space, they get two heads | Techilink 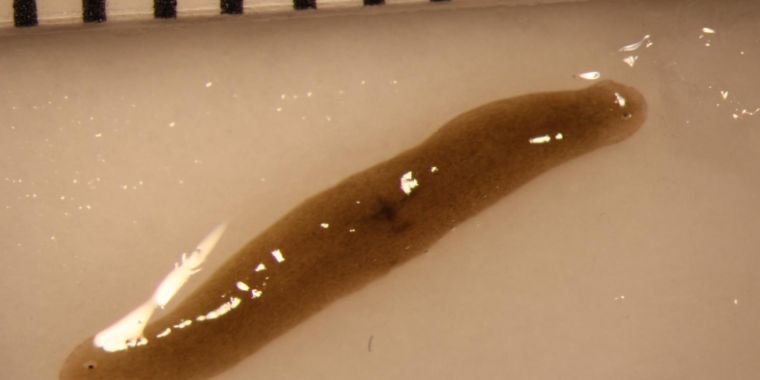 Of the hundreds of scientific tests taking place on the International Space Station, only one has yielded a result worthy of an Ice Cube B-movie. It turns out that flatworms undergo a strange and yet unexplained transformation in space. If they are seriously injured, they get a second head.

Scientists who study tissue regeneration have long been fascinated with flatworms because of the worms’ ability to regrow after being cut in half. The worms can even regrow heads. But as Tufts University biology researcher Junji Morokuma and his colleagues explain in a paper for the journal Regeneration, they’ve never seen a worm grow two heads after amputation. But that’s exactly what happened when an amputee flatworm was sent to the ISS in January 2015.

Delivered to the ISS via SpaceX Commercial Resupply Service Mission 5, the two-header was just one of several flatworms kept on board for a five-week experiment. Some were whole, and others were amputated. The point, as Tufts University biologist Michael Levin put it in a release, was to study how the environment would affect tissue regeneration.

“During cancer regeneration, development and suppression, the formation of the body is subject to the influence of physical forces, such as electric fields, magnetic fields, electromagnetic fields and other biophysical factors,” he explained.

Learning how flatworms cope with space injuries may also influence wound care in humans. “As humans transition toward a spacefaring species, it’s important that we deduce the impact of spaceflight on regenerative health for the sake of medicine and the future of space lab research,” Morokuma said.

However, the researchers weren’t quite prepared for what they would discover. First there was the two-headed worm. This worm began its space journey as a “pharyngeal fragment,” meaning that the researchers cut off both the head and tail. That left only the worm’s tube-like mouth protruding from its abdomen and attached to its digestive tract via the pharynx. Usually a pharyngeal fragment will regrow a head and tail. This one got two heads and a second mouth.

Meanwhile, the unharmed space worms among his cohort underwent what’s called “spontaneous fission,” meaning they split into two worms. This is a form of asexual reproduction in which the original worm grows into a second worm attached to its tail, Human centipedestyle, and eventually the new worm splits off. The researchers say the spontaneous fission may have been caused by temperature fluctuations, so they don’t assume it was a result of life in space.

When the worms returned to Earth, Morokuma and his colleagues spent 20 months comparing them to a control group of worms kept in the lab. The lab worms had been in the same kind of water tubes, in the same environment, with one distinct difference: no outdoor space.

The researchers immediately noticed that the space worms had a hard time readjusting to Earth. For several hours they were curled up and paralyzed. But then they started swimming normally again.

“This indicates that [the worms] their biological state adapted to accommodate the changes in the environment; when reintroduced to fresh water, the environmental change back to standard living conditions resulted in severe shock due to their altered metabolic state,” the researchers write in their paper.

As for the two-headed worm, it stubbornly refused to return to a one-headed lifestyle. When researchers chopped off both heads, they grew back. Space had permanently altered this flatworm’s body plan. More research is needed to find out why.

Previous studies have focused on these animals’ amazing ability to regrow their heads. One of the most incredible parts of this process is that sometimes the worm grows its head back from what was previously its tail. And that means rerouting its “excretory system,” colloquially known as the poop chute.

“The excretory system, made up of units called protonephridia, must be restored in order to resume metabolic waste removal and osmoregulation,” biomedical researchers Kerstin Bartscherer and Suthira Owlarn of the Max Planck Institute write in the journal Regeneration. They also describe which genes seem to determine where the worm will grow its new head.

Fortunately, flatworms keep their mouths approximately in the middle of their bodies and excrete waste products through countless pores. So it’s not like these worms really grow their heads out of their butts. I know that’s disappointing for the eight-year-old comedians in all of us, but at least we’ve got two-headed space worms.