When did bison first join the megafauna of North America? | Techilink 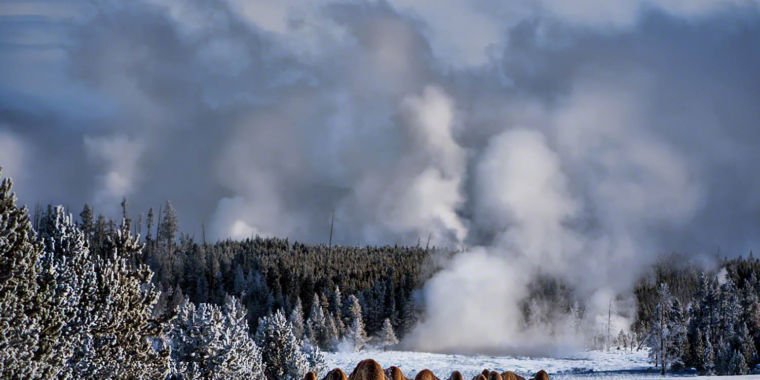 North America had some crazy critters before the arrival of humans. Among the cast of giants were the woolly mammoth and its cousin the mastodon, as well as beavers that could grow up to two meters in height. But if you could go back a little bit further, you’d find that one North American icon is missing: the bison.

Like humans, bison are relatively new to the North American scene. They came from Asia at a time when low sea levels formed a land bridge between Siberia and Alaska. When exactly they made that journey, however, is an open question. It certainly happened during the ice ages of the last 3 million years, and some studies limit their crossing to the last 640,000 years.

A new study led by Duane Froese of the University of Alberta took advantage of a lucky find in northern Canada’s Yukon Territory to come up with a pretty good answer.

The researchers worked at two sites where riverbanks had exposed cross-sections of the sediment layers below the surface. Each site contained an extremely important layer of pale volcanic ash from an eruption 124,000 years ago. These ash layers are the reference points for the timeline recorded in the sediments. Noticeable differences between the sediment deposited during warmer interglacial periods and full ice ages add detail around the ash layers.

At the first riverbank site, bones from beneath the ash layer — about 210,000 years old — included mammoths, horses, caribou, giant beavers, wolverines, and ten-foot-tall ground sloths. But no bison.

The second riverbank offered sedimentary layers above that ash layer. And behold, sticking straight out from the bank was a knobbly footbone of a steppe bison—the ancestral species that made the journey from Asia. It was part of a layer between the ash and boreal forest sediment that marked the warm interglacial period before our current one. That puts the bone at about 130,000 years old.

Thanks to recently improved techniques, the researchers succeeded in sequencing mitochondrial DNA from the bone. They did the same with a roughly 120,000-year-old bone in Colorado from a giant long-horned bison — a descendant of the steppe bison. Together with previously published mitochondrial DNA from 44 younger Siberian and North American specimens from the past 45,000 years, they put together a family tree that could highlight dispersal from Asia based on the calculated mutation rate.

From that analysis, they see evidence of two waves of arrivals. The two oldest bison shared a common ancestor between 195,000 and 135,000 years ago, while a second set of bison emerged between 45,000 and 21,000 years ago. This corresponds to the last two times when sea levels were low enough for a land bridge to emerge from the Bering Strait.

Interestingly, that timeline also suggests that bison, finding their new digs to their liking, quickly spread and diversified in North America. That means they could potentially serve as their own paleontological reference point — when bison bones first show up in the sediment layers in a particular place, you might have a good idea of ​​their age. As the researchers put it: “[T]The entry of bison stands with the arrival of humans as one of the most successful mammal distributions in North America in the past million years.