What we know about the massive chemical explosion in Beirut | Techilink 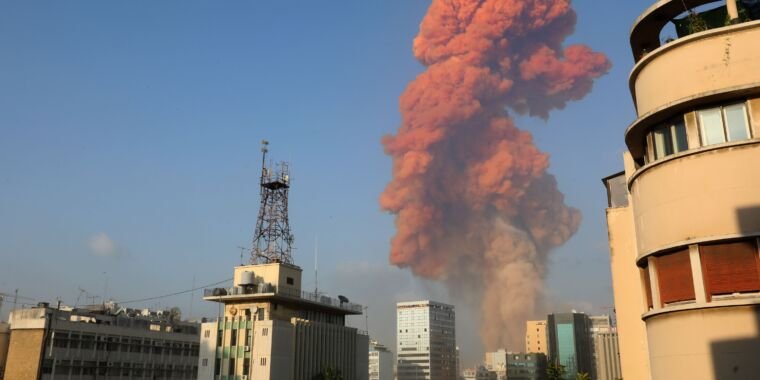 On Tuesday, Beirut was devastated by a massive chemical explosion that occurred in the city’s port just after 6:00 p.m. local time. The blast killed at least 135 people and injured thousands more, and may have left 300,000 residents homeless after the shock wave shattered glass and damaged buildings in the Mediterranean city. Initial reports blamed incorrectly stored fireworks, but the real culprit soon emerged: 2,750 tons of ammonium nitrate (NH4NO3) that had been Seized by Lebanese officials from a cargo ship in 2013 and has since been stored in a warehouse in the port.

A fire is now believed to have broken out in the warehouse – possibly as a result of… careless welding performed as an anti-theft measure– causing the stock of chemical, often used as fertilizer, to explode catastrophically.

Ammonium nitrate has often been combined with fuel oil to make an explosive used in mining and construction, and it has been used as an oxidizer for rocket engines. But it has also been used for more nefarious purposes. The first recorded ammonium nitrate fuel oil (ANFO) bomb was detonated in 1970 at the University of Wisconsin-Madison as a protest against the Vietnam War. Terror groups on both sides of the sectarian conflict in Northern Ireland also built bombs using ANFO from the 1970s through the 1990s, and Timothy McVeigh used a combination of ammonium nitrate and nitromethane for a 1995 Oklahoma City terror attack.

But industrial accidents involving ammonium nitrate have resulted in even greater disasters. When exposed to sufficient heat, the chemical either decomposes to form nitrous oxide (N2O) and water or, at higher temperatures, nitrogen (N2), oxygen (O2), and water; in both cases the result is a highly exothermic, energetic reaction. One clue to the role of ammonium nitrate in this explosion was the deep red-orange color of the explosion that could be seen in the many videos posted online; this was due to the presence of highly toxic nitrogen dioxide gas, which is formed as a secondary product of the reaction.

In 1947, a fire broke out aboard a cargo ship in Texas City, Texas, harbor carrying 2,300 tons of ammonium nitrate. An unwise decision to direct steam into the ship’s interior walls in an attempt to fight the fires contributed to a massive explosion that killed at least 567 people in an event often referred to as the worst industrial disaster in American history ( the explosion also ignited 961 tons of ammonium nitrate and 1,800 tons of sulfur on another ship). More recently, in 2013, the city of West, Texas, was rocked by an explosion at a fertilizer plant that improperly stored more than 270 tons of the chemical, killing 15 and injuring up to 200 more. And in 2015, 881 tons of ammonium nitrate was detonated by a nitrocellulose fire at the port of Tianjin in China, killing 165.

Much smaller than a nuclear explosion

Estimates for the proceeds of the explosion in Beirut vary. Under ideal conditions, one ton of ammonium nitrate has an explosive force equal to about 0.45 tons of TNT. But in Beirut, this stock had been stored in an open factory and had been standing for seven years.

One estimate brings it to the equivalent of 240 tons of TNT, based on map data and the amount of overpressure required to cause the observed damage. Another analysis that measured the size of the blast’s fireball suggests a similar-sized blast containing about 300 tons of TNT. At the top, another analysis that took into account the size of the explosion and the air density came an equivalent of 3 kilotons of TNT†

For context, the atomic bomb that fell on Hiroshima 75 years ago had a yield of about 15 kilotons. And the largest human-made non-nuclear explosion ever recorded was a 1917 disaster in Halifax, Canada, which occurred when an ammunition ship caught fire before exploding with a force of about 2.9 kilotons. Since the explosion in Halifax destroyed everything within 800 meters, the lower estimates for the explosion in Beirut seem more reasonable. What we do know with some precision is that a magnitude 3.3 seismic shock was measured at the time of the blast.

Satellite images comparing the area before and after the explosion show the complete destruction of the port of Beirut. The grain silos that were next to the site of the explosion are still partially upright, although up to 85 percent of the country’s grain supplies are believed to have been lost. (Lebanon imports 80 percent of its food supply, and Beirut normally processes 60 percent of the country’s total imports.)

There is little else in the area but rubble; over the harbor of the explosion site is a capsized passenger ship. Windows were shattered up to three kilometers away and along with other damage to buildings, up to 300,000 people have been made homeless, according to the Beirut governor.

You can find ways to help the relief efforts in Beirut here.