What motivates the motivated reasoning of pro-Trump conspirators? | Techilink 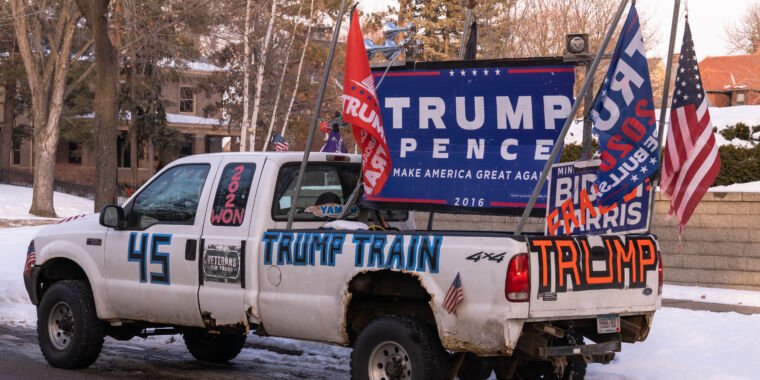 Motivated reasoning is the idea that our mental processes often lead us to filter the evidence we accept based on whether it is consistent with what we want to believe. It has been widely seen in the United States in recent weeks. People are accepting context-free videos shared on social media in response to investigations conducted by election officials. They reject clear evidence of President Donald Trump’s historical unpopularity, while agreeing to evidence-free conspiracies involving deceased Latin American dictators.

However, if the evidence for motivated reasoning is clear, it’s a lot harder to figure out what drives motivation. It’s not just Republican identity, as Trump has adopted many policies that run counter to previous Republican orthodoxy. The frequent appearance of Confederate flags confirms that racism is involved, but that does not seem to explain everything. There is a long list of possible motivations to cast doubt on whether a single one could be enough.

However, a recent article in PNAS offers a single explanation that incorporates many of the possible motivations. It is called ‘hegemonic masculinity’ and it involves a worldview that places men from the dominant cultural group as the center of social power. And research data seems to support the idea.

Masculinity and its discontent

So, what exactly is hegemonic masculinity? The researchers behind the new work, Theresa Vescio and Nathaniel Schermerhorn of Penn State, consider two ways of looking at masculinity. One of these, called the precarious male identity, is largely about personal perceptions of one’s own masculinity. From this perspective, masculinity is not a permanent state; it is one that is constantly being re-evaluated, and those who want to maintain a masculine identity must regularly reinforce it. “Masculinity is earned and sustained by continued display of masculinity” is how the authors put it.

However, this can stimulate behavior at a societal level. People may view those who do not conform to traditional gender roles as a threat to masculinity and treat them with hostility. It can influence policy to the extent that support for policies such as war and lax gun regulations allow the display of masculinity.

Hegemonic masculinity, on the other hand, is based on a societal level perception of the proper role of men. In particular, it sees the traditional role of men – namely that they are the dominant focus of society – as how society should be ordered. It “justifies and legitimizes the power of dominant men (i.e., white, heterosexual, upwardly mobile, and healthy men) over women and marginalized men,” the authors write. In this view, women are not responsible for enhancing feelings of masculinity in men; instead, they are expected to help strengthen the social order.

This view poses a host of threats beyond those who do not conform to gender norms, including the prosperity of any group such as minorities or immigrants that could weaken the dominance of the current hegemonic group of men.

(Obviously, both ideas are much more than can be captured in a few paragraphs.)

Vescio and Schermerhorn suggest that the symptoms of hegemonic masculinity align well with Trump’s calls. His nostalgia for the past was centered on a time when the dominance of white males was taken for granted by most of society. He frequently suggested that his image as a successful businessman was an indication of his superiority. He regularly attacked minorities and immigrants. That said, Trump also exhibited behavior typical of responses to perceived threats to masculinity: “Trump was openly hostile to gender atypical women, sexualized gender-typical women, and attacked the masculinity of male peers and opponents.”

Masculinity and (some) American voters

While there is considerable overlap between these perceptions of masculinity, it is possible to distinguish between the two. People who accept hegemonic masculinity don’t necessarily see their masculinity threatened by losing a sports competition, for example, as long as the people they lose are from the dominant male population (although they may find it threatening if they both endorse concepts). By asking a series of about 65 questions, Vescio and Schermerhorn were able to determine how many individuals endorsed each of these two concepts.

The researchers then conducted a series of surveys, both around the 2016 election and ahead of the 2020 election, to obtain demographic information, political views and attitudes to masculinity. Although the surveys involved more than 2,000 people, one of the biggest weaknesses is the nature of this population, which consists mainly of students and participants of Mechanical Turk. These are unlikely to represent the voting population of the US as a whole, and so this study really should be seen as a way of finding out whether these ideas are worth pursuing in a more representative population.

Within this population, however, the researchers were able to gauge both support for Trump and the participants’ feelings about masculinity, racism and sexism. The researchers began performing a series of regressions, checking for effects such as participants’ political affiliations, gender, and so on before interfering with the analysis.

And the association stuck in different demographic groups. †[Hegemonic masculinity] predicted Trump votes and evaluations equally well for women as for men, white and non-white participants, Democrats and Republicans, and for all educational levels,” conclude Vescio and Schermerhorn. And the association was much stronger than that for the threat-oriented masculinity.

One quirk in the data is that supporting Trump did not necessarily equate to voting for him. In voting, biases had a stronger association than masculinity issues.

Again, it is important to note that the population here does not necessarily reflect that of the voting population of the US. And the presence of the associations seen here does not mean that all Trump supporters are motivated for these reasons. But hegemonic masculinity seems to provide a behavioral framework to explain the intense nostalgia behind the “great weather” phrasing of Trump’s slogan – it is a nostalgia for a social order that no longer exists and has no realistic chance of coming back anytime soon. And thanks to that framework, it’s something that we can potentially study and understand in more detail.

There was no guarantee that the motivational force produced by this nostalgia would necessarily lead to the wave of misinformation that has now engulfed much of the American public. But it’s clear that many people intuitively felt that it could and have tried to do that to their advantage.