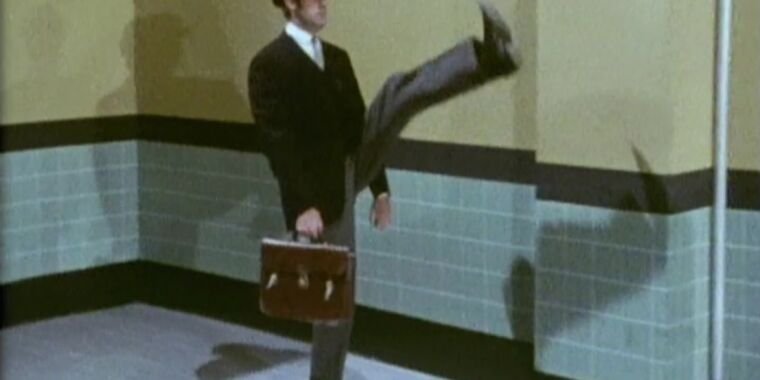 One of the most famous sketches of Monty Python’s Flying Circus depicts John Cleese as a bowler hat bureaucrat at the fictional Ministry of Silly Walks. It’s a classic of physical comedy, much like the group’s Dead Parrot sketch (“This parrot is gone!”) in terms of cultural significance.

A few scientists from Dartmouth College [corrected] conducted a gait analysis of the various silly walks on display and published their findings in a new article in the journal Gait and Posture. It is intended in part to commemorate the skit’s 50th anniversary, as well as to draw attention to the need for a more streamlined peer review process for health science grants.

The two authors, Erin Butler and Nathaniel Dominy, are married and met 12 years ago at Stanford. (Butler was a TA for a class where Dominy lectured on the evolution of bipedalism.) Dominy is the Monty Python fan. “So, put together a Monty Python fan with a creative scientific mind and an expert in gait analysis, and this article is what you get,” Butler told Ars. Or, as they wrote in their article, “It’s really the silliness of the sketch that appeals to us, and extreme silliness seems more relevant now than ever before in this increasingly Python-esque world.”

The skit, which first aired on BBC One on September 15, 1970, begins with Cleese’s character buying a newspaper on his way to work – costing him a little more time than usual because his walk has been “quite more foolish lately.” has become’. A gentleman named Mr. Putey (Michael Palin) who seeks a grant from the Ministry to develop his own dumb gait. (Note: The name is spelled “Pudey” in the papers, but we’re going with the Wiki spelling.) Mr. Putey demonstrates his silly walk-in-progress, but the minister isn’t immediately impressed. “It’s not particularly silly, is it?” he says. “I mean, the right leg isn’t crazy at all and the left leg just makes a half turn forward with each alternate step.”

mr. Putey insists a government grant would allow him to make the walk very silly indeed. The minister goes on to talk about budget constraints – all while foolishly walking around his office – and showing him an old film reel of several silly walks. Finally, he shares Mr. Putey that he would like to offer him a research grant on the Anglo-French stupid walk. The sketch cuts to a couple of French people demonstrating this “La Marche Futile”.

This isn’t the first time scientists have thought of studying the unusual corridors depicted in the sketch, with a view to applying the biomechanical lessons learned to design better robots, for example. In 2007, Cornell University researchers concluded that while entertaining, the crazy walks required far more energy than conventional walking and running. (This could partly explain why Cleese refused to perform the crazy walks in later years, as the moves became more and more difficult for him.)

For their own gait analysis, Butler and Dominy studied both Mr. Putey and the minister’s gait cycles in the video of the original 1970 television sketch, as well as the minister’s gaits from a 1980 live performance in Los Angeles. “If foolish walking can be defined as deviations from typical walking, then foolishness can be quantified using two-dimensional video-based motion analysis,” they wrote. So that’s what they did. Butler and Dominy found that the minister’s foolish step is much more variable than a normal human step – 6.7 times as much – while Mr. Putey’s step is only 3.3 times more variable.

So what does all this stupid walking have to do with academic peer review? The outline may be a satire on bureaucratic inefficiency, but Cleese’s minister is essentially engaged in a hyper-streamlined version of the peer review process in his meeting with Mr Putey which (the authors concluded) resulted in a fair assessment. In reality, “Peer review is a very time-consuming process, both for the application and for the reviews,” Butler says.

“If the process were streamlined and grants awarded faster, researchers could start their work earlier, speeding up the research timeline,” Dominy said. This would also save grant managers time and money.

“Obviously the skit goes to the extreme: a peer review by one person in 20 seconds,” Dominy told Ars. “Satire is double-edged. The sketch satirizes bureaucratic inefficiency with folly, while at the same time satirizing hyper-efficiency beyond current views of simplified peer review.” He cites evidence that an 80 percent reduction in grant duration would streamline the process without adversely affecting the likelihood of receiving funding. For example, the Australian National Health and Medical Council streamlined its peer review process in 2013, saving an estimated $2.1 to $4.9 million (in Australian dollars) a year.

That said, “The results of the Research Fellowship awarded to Mr. Pudey [sic] are unknown to us, which weakens our central argument about the potential economic benefits of adopting simplified peer review more widely,” the authors wrote (emphasis on the cheek) in their paper.