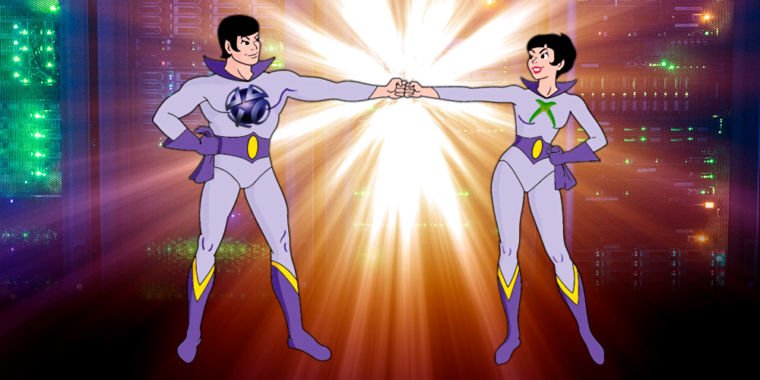 In a rare move, console rivals Microsoft and Sony announced a major partnership on Thursday to join forces in a potentially massive new gaming sector: the cloud. The companies announced today that they have entered into a “memorandum of understanding” to “explore the joint development of future cloud solutions in Microsoft Azure to support their respective game and content streaming services.”

The surprise move is the closest sign of collaboration between two fierce competitors in the console gaming space, but it’s probably not a sign that they’ll stop being competitors anytime soon.

As part of the agreement, Sony will continue to use Microsoft’s Azure servers and data centers for its own game and content streaming services. That would presumably include PlayStation Now — Sony’s game streaming service that launched in 2014 following Sony’s 2012 acquisition of streaming company Gaikai — and PlayStation Vue, the company’s internet-based alternative to cable TV.

Microsoft is already planning to use Azure as part of its own Project xCloud game streaming service. That could play into a split hardware plan that Microsoft hinted at at last year’s E3, with a high-end console for top-notch local gaming and streaming game content that can run on all sorts of other devices as well.

The companies also agreed to “explore semiconductor and AI collaborations,” but the announcement in the announcement of “joint development of new intelligent image sensor solutions” suggests that this may have more to do with the Azure Kinect sensor than it does. anything gaming related. †

Don’t worry, they are still competitors

Seeing two fierce console competitors announcing a gaming partnership makes it easy to draw conclusions about what the future of the gaming market could look like. We’re sure there will be numerous speculative articles and YouTube videos explaining how this partnership portends the “end of the console wars” for these two companies. We can practically hear the keyboards typing the alleged details of an imagined joint Microsoft/Sony streaming service that allows owners of PlayStation or Xbox hardware (and possibly other devices) to play games streamed over a single server platform under a single Netflix-esque. subscription .

In this console gaming Shangri-La, the idea of ​​an “exclusive” console game would disappear if Sony and Microsoft both publish their major franchises directly on a joint streaming service for everyone to enjoy. Finally, Weapons of War and not mapped on a single platform, playable on a cheap streaming box or a mobile phone!

There’s some twisted logic in this idea. Google’s announcement of its Stadia service in March and reports that Amazon is planning a similar game have convinced a large segment of the industry that remote streaming is the inevitable future of gaming. The prospect of impending competition from such internet giants could be enough to prompt former rivals to team up to maintain a joint position in the market. And given how similar today’s Xbox and PlayStation consoles are on an architectural level, it might make sense to work together for a single “dual console” streaming standard.

On the other hand, this kind of big shift in direction seems like an unlikely move for the two entrenched console giants. Consider the PlayStation 4 successor that Sony recently teased with promises of faster SSD storage, 3D positional audio, and state-of-the-art CPU and GPU hardware. The mere existence of such a console is at odds with the game-even-on-cheap-hardware ethos of efforts like Stadia. And such a console will need exclusive games to convince people to buy it, making it unlikely that Sony would be willing to just give up that software exclusivity for a “let’s all work together” streaming service.

Similarly, Microsoft has already hinted that it is “deep in designing the next Xbox consoles” that “will set the benchmark for console gaming.” Why do that if you’re just going to put the next Halo game on a service that is fully accessible to people who buy the competing console (or no console at all)?

The most direct reading of today’s announcement could simply be an acknowledgment of Sony and Microsoft’s respective strengths. Sony has a head start in the streaming content game through the PlayStation Now and PlayStation Vue brands. Microsoft, on the other hand, has a wider geographic spread of Azure data centers than competitors Amazon and Google. Given how sensitive game streaming services are to latency issues, this makes Azure ideally suited as a platform for Sony to stream its PlayStation content to users.

Perhaps it would be better for everyone if Microsoft and Sony stopped selling proprietary hardware altogether and just embraced a supposed streaming utopia where all games could just be played on just about any internet-connected device (let alone the ongoing concerns about latency, internet infrastructure and costs).

But this is wishful thinking. Both Sony and Microsoft are working on their next-generation consoles with state-of-the-art hardware, making it clear that they see premium, high-end consoles, and the platform exclusives that were used to move them are there to stay. Despite today’s announcement, we don’t see Microsoft and Sony joining forces and ending the console wars any time soon.