What kind of gaming rig can run at 16K resolution? |Techilink 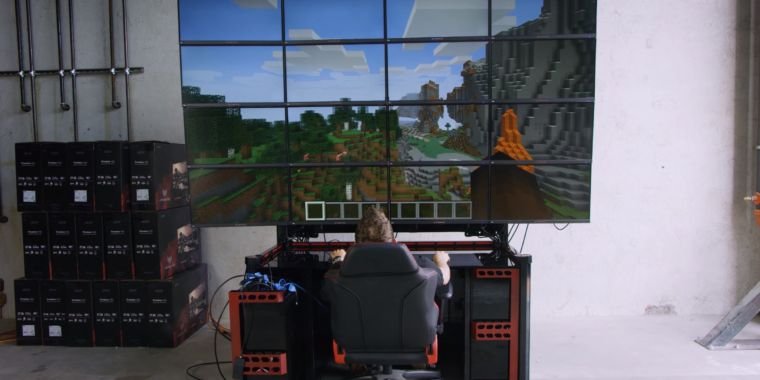 The consumer gaming world may have been confused about 4K consoles and displays lately, but that resolution standard wasn’t nearly enough for one team of PC tinkerers. The folks at Linus Tech Tips posted a very entertaining video showing a desktop PC capable of running (some) games at an amazing 16K resolution. That’s a 15260×8640, for those counting the more than 132 million pixels pushed each frame — 64 times the raw pixel count of a standard 1080p display and 16 times that of a 4K display.

Key to the build are four Quadro P5000 video cards provided by Nvidia. While each card performs the same as a consumer-level GTX1080 (8.9 teraflops, 2560 parallel cores), these are professional cards designed for animators and other high-end graphics work, often used for massive jumbotrons and other multi-display or multi – projector installations.

The main difference between Quadro and consumer cards is that they come with 16 GB of video RAM. Unfortunately, the multi-screen mosaic technology that synchronizes the images means that mirrored memory does not stack, leading to the main bottleneck of the installation. All told, the graphics cards alone would cost over $10,000, including a “quadrosync” card that ties them all together to run a single image across 16 screens.

The graphics cards push their pixels onto sixteen 27-inch Acer Predator XB1 4K IPS displays, mounted in a 4×4 grid on an ICTable custom computer desk. The monitor setup alone draws 1,100 watts from the wall and requires 240 feet (about 73 m) of DisplayPort cables. The total screen size is approximately 94 inches by 53 inches (239 cm by 135 cm), or 108 inches diagonally, not counting the small bezels between each screen.

Rounding out the build is an ASUS Rampage V Edition 10 6900K motherboard, with a massive Nostua NH-D15 heatsink and 32GB of Corsair DDR4 RAM. After this monstrous rig failed in a previous video, replacing the cabling kept all 16 monitors in sync with minimal tearing or “wiggle” between the different displays. That’s a big step up from a previous 8K gaming the team did, which suffered from noticeable lag between images on each monitor.

But after all that, the 16K gaming performance was a bit mixed. Lower titles such as Minecraft and Half-life 2 scaled up to the huge resolutions without much effort, running at 40 fps or higher (or well over 5 billion pixels per second). civilization V runs at about 20 frames per second, although the unscaled interface elements are almost unusably small in the video.

On a more modern game like Rise of the Tomb Raiderhowever, the rig chugs along at an unplayable 2 or 3 fps, which is almost worth seeing Lara Croft literally life-sized. Shadow of Mordor simply refuses to work when faced with the daunting resolution being asked.

As impressive as this build is from today’s point of view, it’s humbled to think that this kind of performance will probably be possible at the consumer level in a decade, if Moore’s Law doesn’t slow down (itself an open question). When you see this achievement today, it’s like someone hacked together a 4K gaming rig in the late 90s or early 2000s, when 1080p resolution gaming was still state-of-the-art. What seems like a ridiculous overload of pixels today may seem mundane in the near future.