What happens when you replace a human gene with its Neanderthal version? | Techilink 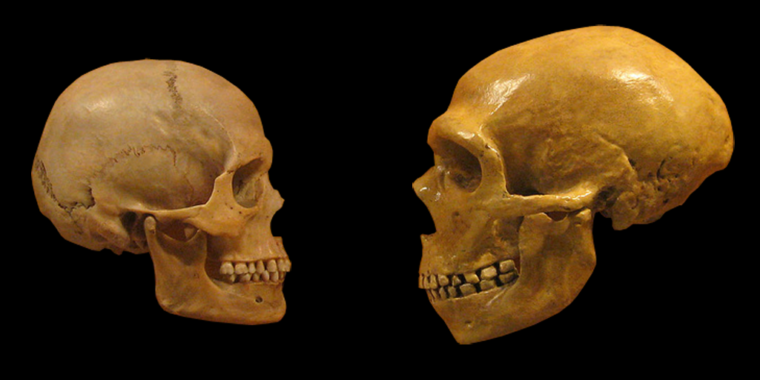 What are the main differences between modern humans and our closest relatives, the Neanderthals and Denisovans? For the Neanderthals, there doesn’t seem to be a clear difference. They used advanced tools, made art and settled in some very harsh environments. But as far as we can tell, their total population was never particularly high. When modern humans came on the scene in Eurasia, our numbers increased, we spread even further, and the Neanderthals and Denisovans became displaced and eventually died out.

With our ability to obtain ancient DNA, we’ve now looked at the genomes of both Neanderthals and Denisovans, which allows us to ask a more specific question: Could some of our differences be due to genetics?

The three species are closely related, so the number of differences in our proteins is relatively small. But a large international research team has identified one and manipulated it back into stem cells obtained from modern humans. And the researchers found that neural tissue made from these cells shows remarkable differences from the same tissue grown with the modern human version of this gene.

A not quite super NOVA

As a first step in their work, the researchers had to decide which gene to target. As we mentioned above, the genomes of all three species are very similar. And the similarity only gets bigger when you look at those parts of the genome that code for proteins. An added complication is that some versions of genes found in Neanderthals are still found in a fraction of the modern human population. What the researchers wanted to do is find a gene where both Neanderthals and Denisovans had one version and almost all modern humans had another.

Out of tens of thousands of genes, they found only 61 that passed this test. The one they chose to focus on was called NOVA1† Despite the explosive-sounding name, NOVA1 was simply named after originally found associated with cancer: Neuro-oncological ventral antigen 1. A look through the vertebrate family tree reveals that Neanderthals and Denisovans share a version of NOVA1 with everything from other primates to chickens, meaning it was present in the ancestor mammals shared with dinosaurs.

Yet nearly all people have a different version of the gene (a search of a quarter of a million genomes in a database, the researchers were able to identify only three copies of the Neanderthal version). The difference is subtle – the swapping of a closely related amino acid at a single location in the gene – but it is a difference. (For those who care, it’s isoleucine to valine.)

But NOVA1 is the kind of gene where small changes can potentially have a big impact. The RNAs used to make proteins are initially made of a mixture of useful parts separated by useless spacers that must be spliced. For some genes, the different parts can be spliced ​​together in more than one way, allowing different forms of a protein to be made from the same starting RNA. NOVA1 regulates the splicing process and can determine which shape of multiple genes is made in cells where it is active. For NOVA1the cells where it is active include many parts of the nervous system.

If that last paragraph was a little confusing, the short version is this: NOVA1 can change the types of proteins made in nerve cells. And since behavior is an area where modern humans may have been different from Neanderthals, it’s an intriguing target of these kinds of studies.

Obviously, there are ethical issues in trying to see what the Neanderthal version would do in real humans. But some technologies developed over the past ten years now allow us to approach the question in a very different way. First, the researchers were able to take cells from two different people and convert them into stem cells, which can develop into any cell in the body. They then used CRISPR gene-editing technology to convert the human version of the gene into the Neanderthal version. (Or, if you’re less charitable, you could call it the chicken version.)

After performing extensive checks which indicated that: NOVA1 the only gene that had been altered by the editing, the researchers allowed the stem cells to form the neurons that are typical of the cerebral cortex.

There were also differences on a genetic level. The research team looked for genes with altered activity (measured by messenger RNA levels) in the Neanderthal cells NOVA1† There were quite a few, and they contain some important regulators of neural development. And, as expected from a splice regulator, there were hundreds of genes that saw changes in how their protein-coding RNAs were put together.

Many of these genes appear to be involved in the formation and activity of synapses, the individual connections between nerve cells that allow them to communicate with each other. Not surprisingly, this changed the behavior of those connections. Normally, nerve cells in culture form connections and coordinate their activity. In cells with the Neanderthal version of NOVA1there was less coordination and a higher background of nerve cells firing signals at random.

A matter of context

The results clearly show that having the Neanderthal version of NOVA1 is not good for the nerve cells of modern humans. However, it will take some more work to determine whether all of the changes described here are the product of specific differences between the two forms of the protein or simply a result of the nerve cells being unhealthy due to the misregulation of genes.

But the researchers also caution against over-interpreting the results in general — while suggestive, these results aren’t a clear indication that gene changes make our brains fundamentally different from those of our closest relatives.

The evolution of the human version of this gene took place against the background of many other subtle changes in human genes, either in their coding sequences or (more often) in the sequences that regulate their activity. Those changes could potentially offset any harmful effects caused by the differences in activity of the modern human version of NOVA1† Suddenly falling back to the original version of the gene could only yield differences because of the mismatch between the gene and all those offsets.

So it will take a while to figure out how much the differences of this one gene mean to the brains of humans and Neanderthals. But most importantly, it is now possible to ask these questions at all. The technologies used to produce these results didn’t exist before this century – CRISPR gene editing is less than a decade old. So just the fact that we know so much is pretty amazing.