What does this 400-year-old painting eat? An entire ecosystem of microbes | Techilink 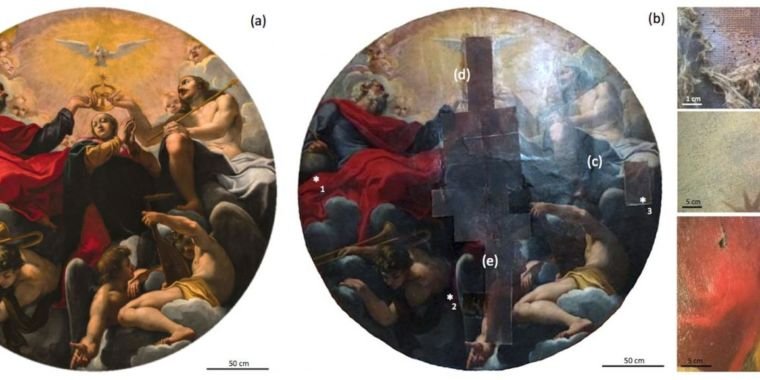 A new study describes the complex ecosystems of bacteria and fungi that live and feast on aecentury painting — and how other strains of bacteria may one day help art conservators fight back.

If you could zoom in for a microscopic look at an oil painting on canvas, you’d see many thin, overlapping layers of pigments — powdered bits of insects, plants or minerals — held together with oil or glue made from animal collagen. Many of those pigments and binders are surprisingly edible for bacteria and fungi. Each patch of color and each layer of paint and varnish in an oil painting provides a different microbial habitat. So when you look at a painting, you’re not just looking at a work of art; you’re looking at an entire ecosystem.

The artistic taste of microbes

To better understand these microscopic art vandals, microbiologist Elisabetta Caselli of the University of Ferrara and her colleagues turned to a Renaissance painting called “Incoronazione della Virgine,” by painter Carlo Bononi. The painting once adorned the ceiling of the Basilica of Santa Maria in Vado, Italy. When an earthquake damaged the church in 2012, the staff took the 2.8-meter-long circular canvas from where it had hung since 1620 and leaned it against the wall in an inner alcove of the church.

The team took a small 4-mm (0.16-inch) square sample next to part of the painting that had been damaged over the centuries. Using X-ray fluorescence, they studied the chemical composition of the pigment and varnish layers Bononi used to create the image.

The results reveal the complex chemistry of an oil painting: copper oxides in the blues and greens, lead and tin in the whites and bright yellows (one of many reasons not to lick Renaissance artwork), cinnabar in some bright reds, and iron oxides in the red, brown and yellow tones. And the red paint in the top layers of the painting bears the chemical signature of red lac (or red lake), a dye made from the laccaic acid found in parts of plants or insects. Given the right conditions, some of those materials can provide the perfect nutrients for microbial communities to thrive.

Previous studies have shown that some types of bacteria and fungi do indeed feed on pigments made from laccaic acid and ochre. Over time, the bright colors of the painting seemed to fade as the microbes literally eat them away.

There was no sign of microbial damage to “Incoronazione,” but Caselli and her colleagues found a thriving ecosystem on the 400-year-old canvas. In layers of dark brown and red paint they found fungal species of Aspergillus and Penicillium, which are a common problem in libraries and museums because of their predilection for paper and paintings. In some yellow and pink areas, microscopic examination revealed spores of fungi of the genus Cladosporium. Different types of bacteria from the genus staphylococci also showed up, helping to settle a long-standing debate among art conservators.

“Our results confirmed that [Staphylococci] could be found with high frequency on oil paintings, providing evidence that: staphylococci are painting-colonizing and were not just human skin contaminants accidentally transported to the canvas,” Caselli and her colleagues wrote. And on the back of the canvas, various types Bacillus bacteria had set up a household, apparently feeding on paste and glue.

The results showed that different species of fungi and bacteria feed on different pigments and thrive in different environmental conditions. Caselli and her colleagues say it’s likely that mold and bacteria lie dormant for centuries, hidden between layers of paint, but when the temperature and humidity are just right, a priceless painting can provide fertile ground for the destructive microbes. Understanding which species can grow and feed on different parts of a painting can help museums protect artworks from the ravages of time and microbiology.

And one tool in the fight against destructive microbes could be… other microbes. In the lab, Caselli and her colleagues attacked cultures of bacteria and fungi from the “Incoronazione” samples containing spores of three Bacillus types. The Bacillus spore mixture has already been tested against destructive microbes in a 20e-century, and Caselli and her colleagues say the results gave them reason to think biological warfare could also be the solution to oil painting conservation.

The Bacillus spores outperformed the artificial chewing microbes well enough to stop them growing almost completely. But that doesn’t mean it’s time for art museums to cover their masterpieces with spores. Caselli and her colleagues say they have several more studies to follow to make sure the Bacillus spores will ultimately not damage the paintings they are trying to save.