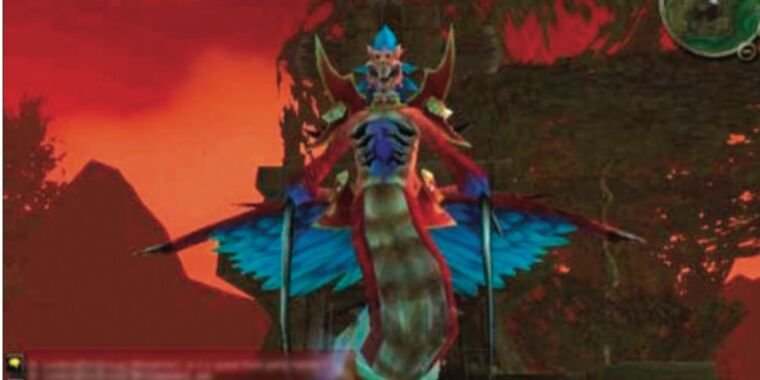 When it comes to a global pandemic, humans are the ultimate wildcard. That makes it challenging to build accurate mathematical models to predict how the disease will progress. We’ve certainly seen far too human reactions to the coronavirus in the past two weeks, with some people panicking and hoarding food, toilet paper and hand sanitizer. Others cling to denial, and still others defy the call for “social distancing” by continuing to go to restaurants, bars, concerts, and so on. Our epidemiological models can explain this unpredictability somewhat better, partly thanks to a virtual outbreak in World of Warcraft almost fifteen years ago, known as the ‘Corrupted Blood Incident’.

The Corrupted Blood outbreak was not intentional. In 2005, Blizzard Entertainment added a new dungeon called Zul’Gurub in World of Warcraft for highly advanced players, controlled by a “boss” named Hakkar. Hakkar was a blood god known as the Soulflayer, who had a ‘debuff’ spell called ‘Corrupted Blood’ among his arsenal of weapons. Infected players would take damage at regular intervals, causing their “hit points” to drain until their avatars exploded in a cloud of blood. The only remedy was to kill Hakkar.

Blizzard thought this would keep the infection from spreading beyond that space. They were wrong. Instead of holding out, many infected players panicked, teleported out of the dungeon before dying or killing Hakkar, taking the disease with them. And lower-ranked players, with fewer hit points, would “die” very quickly on exposure.

The biggest factor in the rapid spread of the disease was programming failure, which also infected non-playable companion animals. They showed no symptoms, but they were carriers and eventually spread the disease even faster. As Corrupted Blood infections spread unchecked, the playing areas became littered with virtual ‘corpses’ and players began to panic. Attempts to quarantine were unsuccessful in stopping the outbreak. In the end, at least three servers were affected and Blizzard had to reboot the entire game to fix the problem.

An epidemiologist named Eric Lofgren, then at Tufts University, happened to be an avid… Wow player and was fascinated by the real parallels to how the epidemic played out in the virtual world. He and his colleague from Tufts, Nina Fefferman, co-authored a 2007 paper published in Lancet Infectious Diseases that explored the potential implications of the Corrupted Blood incident for refining existing epidemiological models, as they could draw on hard data showing how players actually reacted. during an outbreak.

For instance, some players tried to help out with healing spells, which inadvertently made matters worse, as their efforts had to be constantly replenished with those amenable to the spell, rather than let the outbreak run its course. There were the inevitable thrill seekers who went to the contaminated areas out of curiosity and became new victims, which Fefferman has likened to journalists who travel to war zones and put themselves in danger to get a story. There were a handful of players who deliberately spread the infection on purpose – something that has been documented in actual outbreaks – and one player even took on the role of a Doomsday prophet, standing in the town square to recount the carnage that unfolded in the game.

Fefferman is now at the University of Tennessee, Knoxville, studying how small individual decisions can lead to big changes in a given population. That previous work on the Corrupted Blood outbreak continues to inform her investigation.

“It led me to think very deeply about how people perceive threats and how differences in that perception can change their behavior,” Fefferman recently told me. PC gamer† “Since then, much of my work has been about building models of the social construct of risk perception, and I don’t think I would have gotten to that so easily if I hadn’t thought about the discussions. Wow players had real time about Corrupted Blood and how to act in the game, based on the understanding they had built from those discussions.”

Lofgren is now at Washington State University, a region of the US that has been particularly hard hit by the coronavirus. His current work focuses on the stresses that these types of outbreaks place on the healthcare system.

“For me, it was a good illustration of how important it is to understand people’s behavior,” he recently said PC gamer about the earlier Wow study. “We often think of epidemics as things like this… to happen to people. There is a virus and it does things. But in reality, it’s a virus that spreads between people, and how people interact and behave and obey those in authority, or not, those are all very important things. And also that these things are very chaotic. You can’t really predict ‘oh yeah, everyone’s going into quarantine. It’ll be fine.’ No, they won’t.”

So it’s not surprising to see how people behave in ways very similar to the current pandemic, as the… Wow players did that in 2005. “Corrupted Blood was this unexpected black swan event. We’re covering this [coronavirus] like it’s unexpected, but nature is really good at making people sick,” Lofgren says. “If you think about gaming again, we’re constantly making savings against new emerging diseases. And sometimes you fail. We have epidemics that return with some regularity. It’s like getting rid of people who predict earthquakes because you haven’t had an earthquake in a while. Well, you’ll get another one.”