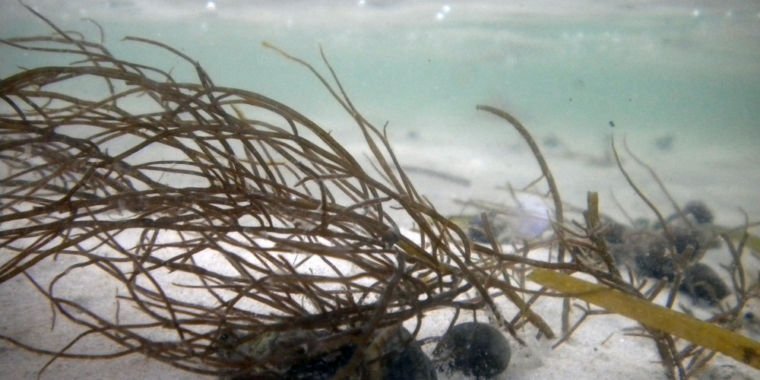 Around the world, invasive species have caused endless problems. Their populations can explode because they have no natural enemies. Or they are predators themselves, pushing native species to the brink of extinction. They can disrupt ecosystems that had developed a fine balance.

But according to a new study published this week in PNAS, not every invasive species is negative. In some cases where we have wiped out an important part of the local ecosystem, an invasive species can take its place. The example of the study? An invasive algae can restore lost habitat to coastal ecosystems and provide a nursery for species such as crab and shrimp.

The work leading to this conclusion took place in North Carolina coastal tidal flats. Normally, this type of geography is broken up by different habitats provided by different organisms: coral reefs, seagrass beds, and oyster reefs. The habitats formed by these species provide shelter for other species, allowing entire ecosystems to develop. But over the past century, many of these habitats have been wiped out, leaving barren sediment behind.

However, an invasive species of seaweed is being mentioned in some areas Gracilaria vermiculophylla has been withdrawn. Gracilaria forms clumps on what would otherwise be a largely featureless stretch of sand and sediment, and it can survive exposure during low tide. The seaweed is not entirely harmless, as it can grow to extreme densities in some habitats, consume much of the oxygen in the water and cause problems for other species.

But along the coast of North Carolina Gracilaria appears to be present in low-density populations, with small groves spread over a wide area. So an international team of researchers decided to test whether the Gracilaria populations generated one of the ecosystem functions provided by species that have since been driven out. To do this, the researchers defined a series of five-by-five-meter plots on what was otherwise a barren stretch of coast. These were either left bare as controls or planted with Gracilaria at different densities.

Once a month, the researchers returned to the sites and measured seven different ecosystem functions. Ten months later, they tabulated the results and determined whether the density of Gracilaria affected any changes.

Two of the measures – stabilization of the seabed in place and changes in material decomposition – were not affected by the presence of the seaweed. But it did slow down the flow of water through the area. And the habitat it created attracted more animals and a wider variety of species. Plots with the seaweed present also served as nurseries, with many juveniles of a number of species including commercially harvested fish, crabs and shrimp.

The amount of seaweed needed for these effects varied. All the algae were enough to attract other species, but the area only became a breeding ground when it had a higher density Gracilaria around.

So generally have Gracilaria in this environment turned out to be a good thing. “This invasion has an overall positive, density-dependent impact on a diverse set of ecosystem processes,” the authors conclude. And that, they say, doesn’t fit with the traditional response to invasive species, which is to get rid of them.

Instead, the authors argue, we should think carefully about alternative approaches. If we don’t restore the original habitat, such as a bed of seagrass, then we will leave Gracilaria round would be better for the ecosystem as a whole. And if we’re going to kill Gracilaria and try to restore the native habitat, then we should try to determine whether the restoration will work. In some cases, invasive species outnumber natives. But in other cases, environmental changes (human-driven or otherwise) have killed the natives before Gracilaria even appeared. Unless the former conditions can also be restored, we will not be able to return to the original habitat.

And if we want to keep it Gracilaria around, we’ll probably want to control population levels so it doesn’t lead to overgrowth and oxygen deprivation. But the authors found that different population levels are needed for specific ecosystem functions. So all management efforts will have to take that into account.

The clear conclusion is that there is no ready-made solution for invasive species. Instead, we must decide what our ultimate goal is and adjust management strategy to achieve that goal. And doing so may involve learning to live with the invaders.