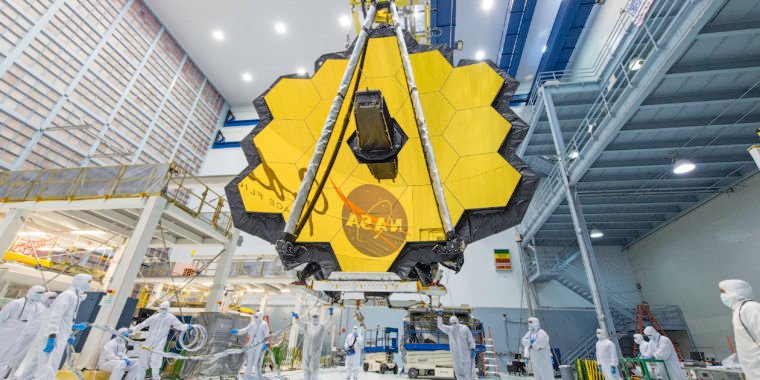 NASA announced today that it has accepted the findings and recommendations of an independent assessment of progress toward the launch of the James Webb Space Telescope, intended to be NASA’s next major observatory. As a result of some changes to procedures and the curbing of some unwarranted optimism about the schedule, the changes will mean Webb won’t launch until March 2021, a delay that will add $800 million to the telescope’s $8 billion price tag.

The James Webb Space Telescope is said to be the most complex imaging hardware NASA has attempted to put into space. It has a large mirror formed by several separate segments that move in place and is protected by a sunshade that would also unfold after launch. Webb’s instruments would be sensitive to a region of infrared that should allow imaging everything from the universe’s first galaxies to the atmospheres of nearby exoplanets.

But so far, that complexity has led to major delays. Early this year, the Government Accountability Office released a report suggesting further delays were inevitable. And shortly after its release, NASA revealed that testing the spacecraft’s deployment resulted in damage to some systems. That formed the basis for an independent assessment committee to give the entire project a new look.

The board’s assessment and NASA’s response were released today. The council paints a picture of significant dysfunction, even as it makes 32 recommendations to minimize the impact of further problems in the future.

The problems stem largely from the work of Northrop Grumman, who builds the spacecraft and its sunshade. Incidents described in the report include using a solvent to clean valves without consulting the valve manufacturer; the wrong solvent damaged the valves and forced their replacement. In another case, managers relied on the word of a single technician that the test wiring was installed correctly. As a result, hardware was exposed to overvoltage.

In a final case, the sunshade fasteners were not sufficiently tightened prior to testing under simulated launch conditions. More than a dozen of them jumped loose, several ended up in the body of the spacecraft, and two of them still have not been definitively located. At a press conference today, review board chairman Tom Young estimated that these cases alone have delayed launch by six months at a cost of about $1 million a day.

The press gave NASA administrators ample opportunity to express their anger at Northrop Grumman, but they mostly declined. Thomas Zurbuchen, an associate administrator of NASA’s Science Mission Directorate, admitted that “I’m not happy to be telling this story here.” But he went on to say that NASA was monitoring and therefore taking responsibility. Questions about whether Northrop Grumman would be financially punished for the problems were answered without providing any dollar figures on the consequences.

Young described how the review identified a range of issues, including human error, embedded problems, lack of experience, over-optimism about the schedule and the complexity of the spacecraft. Of these, he said the main ones were human errors and embedded problems. “Because there are people involved, you can expect errors,” Young said, but there are procedures in place that can catch the errors quickly and minimize their impact.

Embedded issues are significantly more complex, as they represent the work done years earlier that has paved the way for issues that are difficult to detect prior to testing or — perhaps devastatingly — post-launch. When asked about the prospects of further embedded problems that we haven’t discovered, Young said, “I don’t think anyone can tell us today.”

To mitigate the impact of these issues, the review board made a total of 32 recommendations, including systems designed to ensure changes are checked multiple times so that human errors can be spotted before they cause damage or become embedded. The report also calls for a detailed audit of what has actually been done to identify any other embedded issues with some sort of paper trail.

In general, NASA agrees. “By establishing this new launch date, NASA is accepting the… [board’s] recommendations” Zurbuchen said. In fact, the agency has already implemented several of them and is in the process of implementing 30 of the 32. The remaining two are more complicated and are still under review (the PDF linked above shows the responses from NASA on every recommendation Stephen Jurczyk, a NASA associate administrator, said the work was under budget and NASA will be able to use its current funds to implement the changes in 2019. But, he adds, the agency will inform Congress. should ask for more in 2020.

At this stage, the Webb’s package of scientific instruments and the spacecraft itself are still being tested separately. The main test of these changes will come when the two parts of the spacecraft are integrated into the final hardware that will be sent into space.