We may have captured supernova debris colliding with neighboring stars | Techilink 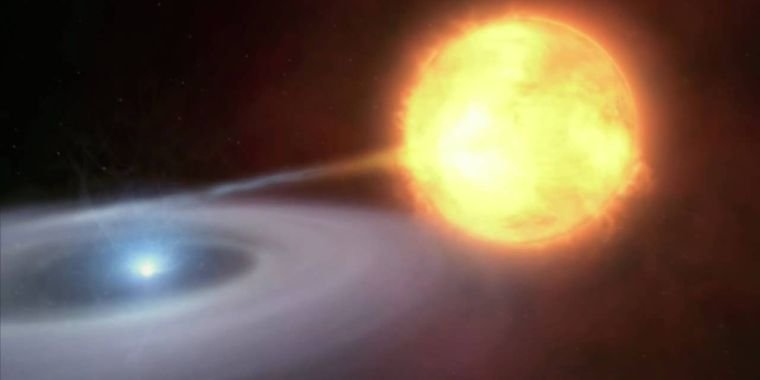 Supernovae are some of the most energetic events in the universe, sending huge shock waves into the interstellar medium. And there’s every reason to believe those shock waves hit things before they’ve had much of a chance to dissipate. Many stars have companions, either planets or other stars that orbit fairly close to each other. In fact, there’s an entire subtype of supernova that seems to need a nearby companion.

So what happens to these objects when the shock wave hits? With our improved ability to quickly identify supernovae, we may be on the verge of finding out. Recently, researchers have seen several times an extra blue glow in the light burst of a supernova. And in the most detailed observations to date, they claim that this glow comes from supernova debris colliding with a companion star.

A supernova explosion enveloping a nearby star is inevitable. For example, Eta Carinae is a system with two stars that have at least 30 times the mass of the Sun, meaning they will eventually both explode as a type II supernova. Whichever goes first is bound to send debris to the second. But there is another class of supernova, type Ia, that requires the presence of a nearby star.

Type Ia supernovae involve the death of a white dwarf, the carbon/oxygen-rich remnants of a star like the sun. White dwarfs have burned up all of their hydrogen and helium fuel, but lack the gravity to create conditions for carbon and oxygen to fuse. However, if they exceed a certain mass threshold, the fusion will suddenly resume, blowing the white dwarf to pieces in what is an astonishingly large nuclear explosion.

There are two ways that extra mass can reach the white dwarf. The first is a collision of two white dwarfs, both of which are destroyed by the blast. The second is when there is a nearby companion star. In this case, the white dwarf can extract matter from its companion, slowly growing until it crosses the critical threshold and explodes. By necessity there will be a star nearby when the explosion takes place. So what happens to it?

Supernovae are rather notoriously bright, which makes detailed observations of anything nearby more than a little challenging. But we’ve seen a lot of Type Ia supernovae over the years, and since they all explode via a similar mechanism, the light they produce has some features in common. So the trick is to identify deviations from these characteristics.

In a new paper, a large team of researchers notes that a number of recent supernovae have shown an unexpected excess of blue light. They then describe the supernova SN 2017cbv, which became visible in March this year. In this case, the supernova was not noticed until a day after the explosion. Follow-up observations over the next six weeks allowed the team to build a detailed record of the supernova’s aftermath (called a light curve). This record was then compared to what we would expect from a typical Type Ia supernova.

Compared to a standard type Ia supernova, SN 2017cbv showed an excess of light at all wavelengths, including the blue and UV regions. This was especially pronounced during the first week after the explosion, when the light rose to its peak. At its peak, there was an excess of redder wavelengths than you would see in a typical Type Ia supernova.

What can cause this? To find out, the team modified a model of Type Ia supernovae with a shock wave colliding with a nearby star. The modified model fits the data well, suggesting that anywhere from five to 15 percent of the light during the peak came from the shock wave that struck a nearby star.

However, the model suggests that the companion star was nearly 40 million kilometers from the white dwarf (which is slightly closer to our sun than Mercury). That’s right on the very edge of where you’d expect the companion star if the two were close enough to share material. However, the authors point out that this model assumes they are looking at the event companion at an ideal viewing angle. If the angle isn’t right, it would look fainter, making the companion star appear further away.

The authors don’t think this is a conclusive demonstration that we’re looking at a companion star, as there are a number of other possible explanations that haven’t been ruled out. These include an irregularly shaped debris cloud, which could allow more light to escape, or a blob of highly radioactive material that is more likely to be visible after the explosion. There is also the prospect that material was ejected prior to the explosion, and the additional light was the debris from the explosion colliding with this earlier material.

The best way to solve this is, of course, more observations. This wasn’t the first supernova we’ve seen that’s slightly brighter than expected. Adding a few more detailed views of the early supernova debris could help us figure out exactly what we’re looking at.

The Astrophysical Journal Letters2017. DOI: not yet available.