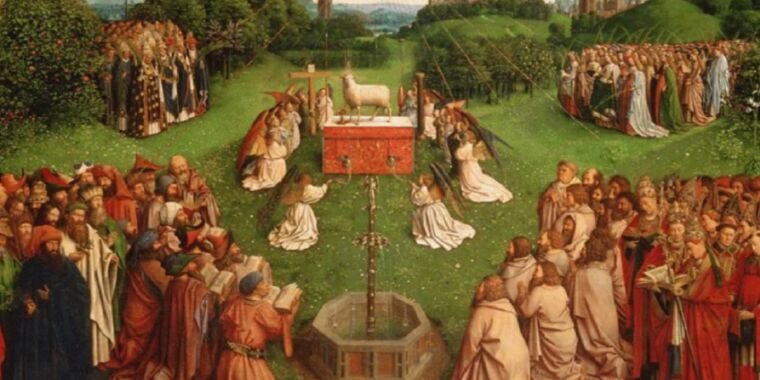 Over the past eight years, conservationists have painstakingly restored the famous Ghent altarpiece in St Bavo’s Cathedral in Belgium. Using several advanced imaging techniques, they have been able to identify where overpainting from previous restorations obscured the original work. Researchers from the University of Antwerp and the National Gallery of Art in Washington, DC, have published a new paper in the journal Science Advances showing how combining different techniques has significantly improved their analysis, involving previously unknown revisions of the Ghent Altarpiece. figure inside were revealed. central panel.

The Lamb of God—also known as the Adoration of the Lamb of God-is a 15th-century polyptych attributed to the brothers Hubert and Jan van Eyck. Originally composed of 12 panels, the altarpiece has two “wings” of four panels each, painted on both sides. Those wings were opened on Church holidays so that members of the congregation could view the inside of the four central panels. The inner upper register shows Christ the King, the Virgin Mary and John the Baptist, flanked by the outer panels depicting angels and the figures of Adam and Eve. The inner lower register shows John the Baptist and John the Evangelist. The Adoration of the Lamb includes the central panel, depicting the Lamb of God standing on an altar in a meadow surrounded by angels, with groups of martyrs, saints and prophets gathering around the altar.

The first major restoration took place in 1550 to repair damage from an earlier cleaning. In 1662 it was cleaned again by the Flemish painter Antoon van den Heuvel. After the altarpiece was damaged during storage in Austrian mines during World War II, another restoration was done in the 1950s, using X-ray radiography (XRR) to aid in those efforts. In particular, the researchers depicted small samples of paint from the cross-section of the altarpiece, providing useful information about areas that had been painted over during the earlier restoration, obscuring the original Eyckian work, including the head of the Lamb.

Artists of this period made an oak panel with a layer of chalk mixed with a binder such as glue. The artist then sketched the image they wanted to paint on that layer in black before sealing the surface with a translucent primer (usually drying oil tinted with lead white, chalk, carbon black, or earth pigments). Then the artist applied a coat (or more) of different colors of paint to define the underdrawing. Finally, the artist would paint the finer details and add the richest colors. A year or so later, when the paint was completely dry, the artist applied a final coat of varnish.

According to the authors of the new Science Advances article, the techniques available at the time were not sufficient to precisely locate all the overpaints due to the extensive use of white lead paint. It just wasn’t possible to achieve the necessary level of chemical contrast. In such cases, “conservators and trustees are cautious and choose to leave areas of potential overpainting in place until further investigation provides definitive evidence of their origin,” they wrote. During the restoration in 1950 only the overpainting was removed from the area around the lamb’s head. This revealed the original gilded rays and ears of the original Eyckian lamb, while preserving the over-painted ears.

Most recently, the Museum of Fine Arts in Ghent began restoration of the altarpiece in October 2012, allowing the public to watch the process from behind a glass screen while conservators from the Royal Institute for Cultural Heritage worked on individual panels. The restoration of the eight outer panels was completed in 2016 and the five lower panels were restored over the next three years.

This most recent restoration also yielded a series of high-resolution images of the various panels using different imaging techniques. As we reported last year, those images, in turn, formed the basis for a study of applying AI analysis to the altarpiece images by researchers from Duke University, the National Gallery and University College London. That team published a paper in 2019 showing that its techniques can make the depiction of the altarpiece’s double-sided painted panel easier.

The fact that the wing panels are painted on both sides presented a unique challenge to conventional X-ray analysis. X-rays penetrate so deeply that it can be difficult to determine which content applies to which side of the panel because “all the images are visibly superimposed or ‘mixed’ together,” the authors wrote. They developed a deep neural network algorithm to study mixed X-rays showing features of the front and back of the painting’s double-sided panels. They successfully applied their technique to X-rays of the panels of the Adam and Eve wing to deconstruct that data into two clear images, greatly improving the performance achieved with previous methods.

Meanwhile, Geert Van der Snickt and colleagues from the University of Antwerp used macroscopic X-ray fluorescence (MA-XRF) imaging, combined with other traditional methods (including XRR and infrared reflectance reflectography, or IRR) on the four inner central panels to determine the full extent of the overpaint done. during the restoration in the mid-16th century.

The combination approach was so successful that the Antwerp researchers decided to collaborate with the National Gallery of Art in Washington, DC, by combining MA-XRF with infrared reflectance imaging spectroscopy (RIS) for the second phase of the restoration, which includes the full restoration of the Lamb of God. “Each method provides a certain level of chemical contrast in cases where the other does not,” the authors wrote. “Each technique can particularly reveal materials to which the counterpart is impervious. For example, overlapping layers that strongly attenuate X-rays may turn out to be transparent to infrared radiation, and vice versa.”

For example, the MA-XRF imaging mapped the mercury in the vermilion paint, exposing the nostrils of the original Eyckian lamb. Meanwhile, the RIS revealed the original layer of the ungulate’s face, which absorbs infrared light. Ultimately, the analysis revealed three different versions of the lamb: the original painted by the Van Eyck brothers; a second version – by the brothers or one of their contemporaries – with larger, square hindquarters; and a third version of the 16th-century restoration that significantly altered the lamb’s head.

The new analysis helped conservationists remove the 16th-century overpaint, revealing facial features that closely matched the researchers’ predictions. The Lamb’s face is very human in its expressiveness, with distinctive pursed lips, smaller V-shaped nostrils and a well-defined jawline, as well as eyes facing forward in a rather disturbing, direct look at the viewer.

Those eyes remain a subject of much debate among art historians. Some argue that it was done to make the lamb appear more human, as a symbol of the embodiment of Jesus. “A simpler explanation might be that painting animals with forward eyes is typical of an older style that was still present in the 15th century, but disappeared as artists mastered a more naturalistic depiction of animals,” the descriptors wrote. authors. Within the Ghent altarpiece itself, examples of animals are depicted with both forward-looking and more naturalistic outward-looking eyes. “It is therefore not unexpected that the Van Eyck brothers would have painted the Lamb with forward-facing eyes that directly address the viewer,” conclude the authors.