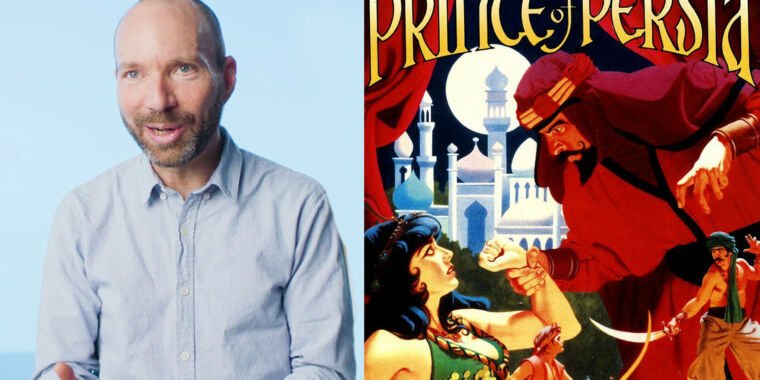 I remember many things about the summer of 1991 (like sneaking into the theater to watch Don’t tell mom the babysitter is dead because my parents definitely didn’t approve of movies that so clearly showed a disrespect for authority from teenagers), but what I remember most from that summer is spending countless sun-filled afternoon hours staring at a rotoscoped male on my computer screen when he died a million dead. Sometimes he fell. Sometimes he was impaled by nails. Sometimes he was cut in half by giant steel jaws. And sometimes he collapsed into a bleeding heap after crossing swords with pixelated baddies.

It was summer for me prince of Persia– and I was totally entranced.

Created by Jordan Mechner a few years earlier in 1989 for the Apple II, the MS-DOS port of Pop hit the shelves with thunder in the late 1990s, just as the Apple II platform was dying as a viable gaming platform. Mechner, as you know, had literally spent years working on the game’s animations, tracing them from video footage of his brother (also from Errol Flynn, interestingly enough), but I didn’t hear about that until some time later. All I knew was that from the moment that game came into my life – probably bought at our friendly neighborhood Babbage’s – I was hooked.

Mechner’s game has come a long way from development to the screen, but what I learned from our interview with the man is how much the Apple II’s memory limitations shaped the game’s final shape — although none of those limitations applied to it. platform on which I (and the majority of players, judging by sales figures) first experienced Pop†

The biggest impact was that until the end of development, Pop would turn out to be a largely solitary experience, with a nonviolent character making his way through a series of dungeons to rescue the princess. The available RAM was just too scarce to accommodate extra characters with their own animations and sound effects that would eat up precious bytes. But one afternoon, after repeated urging from another developer with whom Mechner shared office space, Mechner took advantage of some 6,502 assembly instructions and coded a bit-shifted villain using the main character’s animations and sounds – and suddenly the game a real antagonist.

It was the kick it took to turn an interesting but unexciting platformer prototype into a focused gaming experience, and it drove Mechner to pull out all the stops and put together the extra memory needed for a few more sword-wielding bad guys. He collected precious bytes from unused system locations, and, as they say, the rest is history.

Pop became one of the most revered classic games of all time, with ports to more than a dozen platforms and multiple sequels (although the standout game in the series is likely from 2003 sand of time, which Mechner was involved in and which influenced much of the 2000s game design). It’s a legendary game with a storied history, and it’s hard to find a gamer who lived through the 1990s who hasn’t played a game in the series yet.

The coming together of this video meant a lot to me because like so many classic game titles, just seeing the visuals and hearing the sounds brings back memories of long lazy summer days, where the only decision I had to make was how long. i wanted to play on the computer before meeting my friends at the neighborhood pool. Retrogaming is a powerful thing, and anyone who claims that games aren’t legitimate art is either dead inside or a total idiot.

Ars would like to say a special thank you to Jordan Mechner for the extensive help he provided in making sure we got the technicalities of this video right (especially the assembly language part!). Videos like this wouldn’t be possible without enthusiastic support from developers, and we’re thankful he’s still excited to talk to us about old games.

(Speaking of Mechner: the book he mentions at the end of the video, The Making of Prince of Persia: Journals 1985-1993, should be available for pre-orders on Amazon starting today. If you’re a fan of the game, this would be an excellent addition to your library!)