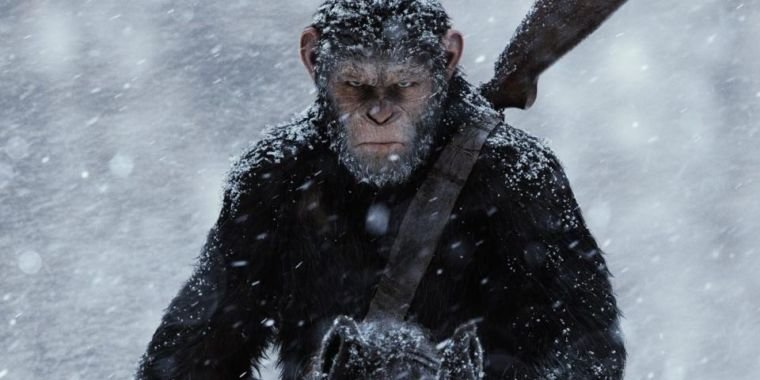 War for the Planet of the Apes is definitely the most fabulous movie in the rebooted Apes trilogy, with its sharply defined war of good apes against bad people. But it’s also the most character-driven story. Of Warit becomes clear that this trilogy has actually been the biography of one person, Caesar, who grew from humble laboratory backgrounds into one of the greatest heroes of the earth.

There is something cheesy yet touchingly real about the way War glorifies his protagonist, which makes him both noble and recognizable. This comes down in part to Andy Serkis, the world’s first truly brilliant mocap actor, filling Caesar’s face with thoughtful, grim determination. But it also involves a simple design choice, which is to have the eyes of the uplifted monkeys change to human eyes. When the camera looks at Caesar, we can’t help but see a person’s face, despite the fur and thick brow ridges.

This is especially important with War, where the humans and apes finally switch roles. One of the signature details in the original series is that many people lost the ability to speak in the distant future. Astronaut Charlton Heston is slung nearly 2,000 years into the future and discovers that wild humans live like monkeys once did. In Warlet’s see how this situation came about.

As compared to Dawn of the Planet of the Apesthat was about conflicts within the ape and human communities, War tells a very simple monkey-to-man story. Caesar and the monkeys have withdrawn deep into the Sierras and live peacefully in a village hidden behind a waterfall. But the people, led by the quasi-religious authoritarian colonel (Woody Harrelson, in full psycho mode), spend all their time hunting what they call “the kong.” A particularly vicious heist leaves Caesar shaken forever.

Now Caesar must bring his people to safety, but his usual wisdom has been tainted by a vengeance against the Colonel. Against his better judgment, Caesar sets out on a secret mission to the Colonel’s base on the California border. Along the way, we witness the final agony of human society. The few remaining humans seem to live in military units, and one by one they are knocked down by a new permutation of the virus that renders them unable to speak. When Caesar and his advisers find a young, stupid girl, the ever-ethical orangutan Maurice (Karin Konoval) rescues her and names her Nova.

The kindness that Maurice and the other monkeys show to Nova is in stark contrast to the Colonel’s behavior. We find out that he has executed anyone who goes dumb, fearing it would leave humans vulnerable to monkey conquest. The Colonel is basically an American version of Pol Pot, who rules through discipline, ideology and torture.

At this point in the trilogy, there are really no good people left. We have the sweet, innocent Nova, but all the others Homo sapiens are hyper-militarized death junkies who try to kill each other if they don’t enslave or torture monkeys. There isn’t much subtlety here, except when it comes to Caesar. We watch his psychological struggle as he tries to overcome his basic instinct for revenge and find hope even when all seems lost. Somehow, since this is a character study of a monkey rather than a human, this standard “hero in doubt” arc doesn’t feel like a cliché. It feels real.

When critics compare writer/director Matt Reeves’ reboot Apes to the original five-movie series (let’s not talk about Tim Burton’s horror), they often say that Reeves’ version is more realistic. But the main difference between the two versions isn’t silly/fantastic vs. realistic/pixelated. It’s that the original was essentially a time travel story. In fact, it’s one of those classic closed-loop deals, where we get elevated monkeys in the present because Caesar’s parents time-traveled from the 3900 to the 1980s. (I wrote about the crazy Apes timeline here, and there’s even a handy chart.) So basically the future apes created themselves through time travel. The entire first franchise involves commuting back and forth between the present and the distant future, and there are plenty of encounters between the civilized apes and their civilized human counterparts.

There is absolutely no time travel in Reeves’ Ape trilogy, nor is there a chance for humans and apes to meet as equals. We begin a hard apocalypse as a deadly pandemic decimates humanity in Rise of the Planet of the Apes. Separately, a scientist has invented a drug that can elevate monkeys, giving them knowledge comparable to that of humans, the ability to speak, and those human eyes I mentioned earlier. You could say that Reeves replaced the time travel trope with a plague apocalypse and a biotech marvel.

This makes a huge difference in terms of the story Reeves can tell in his movies. We focus on Caesar and the monkey culture he is creating, and the world building revolves around contrasting the monkey’s way of life with humans. Although the monkeys could choose to live anywhere in the dead world, they decide to live something like native people in America. They have guns, horses and some tools, but they live in simple wooden houses and seem to survive as hunter-gatherers. The people meanwhile live in the ruined remains of their cities and try to rebuild the electricity grid (in Dawn) or the military (in War).

Instead of being a time travel story, it’s like the… Apes reboot plays with an alternate timeline where the native way of life rules America and the industrialized types die in a plague. There’s also an interesting hint of monkey spirituality developing in War. Caesar eventually becomes a Moses-like figure, leading his people out of slavery and into a promised land.

While it’s both thought-provoking and exciting, there’s one problem with it: War. His future is so grim that it sometimes gets absurd. When we get to the colonel’s camp, it’s like a combination of all the terrible things in recent human history: concentration camps, the Vietnam War, the enslavement of African Americans, the extermination of indigenous peoples, etc. Yes, we understand that people are bad. But why are they so uniformly bad? Have all good people died in between? Dawn and War?

The answers don’t really matter. We need the people who are absolutely irredeemable if we want to buy Caesar’s monkey Utopia. Only when the humans are completely rubbish, or completely stupid, does the monkey takeover seem justified.

Interestingly, the original Apes series ended with Caesar changing the timeline so that humans and lofty apes eventually coexist peacefully. In War for the Planet of the Apes, that’s not an option. Despite this dark scenario, it’s still fantastically poignant to watch Caesar free his people from the Colonel’s iron fist – proving that humans aren’t the only great leaders on this planet.