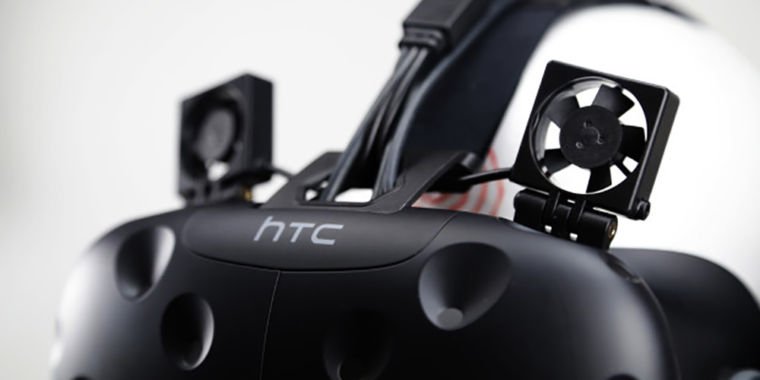 Crowdfunding has given the world some wonderful bits of garbage gadgets in the past – see the Laser Razer, the Zano Drone and the silver anti-radiation underwear – but it’s been a while since anything truly absurd has happened. Join the ViveNchill, a just-funded Indiegogo campaign that claims to solve the most pressing virtual reality problems: headset sweat.

How? By attaching two small USB-powered fans to the top of an HTC Vive. And not just any fans, oh no, these are precision-engineered magnetic levitation fans pressed from a mold made from “high-quality NAK80 steel”. Not only that, but they also have an “angle-adjustable airflow” (a hinge), so you can blow just the right amount of air across your forehead without at cool.

If you thought, “Hey, that actually sounds pretty cool, fresh air in the headset is a great idea,” you’d be right, but unfortunately that’s not what the ViveNchill does. According to the product’s Indiegogo page, “users complained of dry eyes, high noise levels, vibration, interference with the built-in microphone, and low cooling effect,” while air was pumped directly into the headset.

Instead, the fans cool your forehead, producing the “greatest absolute sweat volume per unit area” according to cited research from another company called Veo Strip, which sells rubber strips designed to divert forehead sweat away from your eyes. “The forehead is especially important for cooling and can dissipate heat 4x the speed of the torso,” according to more cited research from Veo Strip.

“We took things out and focused the airflow on the forehead and the area of ​​contact with the face foam,” said ViveNchill. “We found a dramatic improvement in the ability to cool you down without negative side effects. As an added benefit, reducing heat and moisture also reduced fogging and nausea.”

If you clip two fans on the top of an HTC Vive that don’t really circulate air in the headset and are (according to some who’ve tried it) too loud and – given their size – almost certainly do a worse job than simply putting a desk fan in your VR Room, then you can now promise $25 plus delivery for a unit to ship in September. Should the ViveNchill come to retail, it will cost $35.

If you’d rather have a really useful accessory for your HTC Vive, check out the “Deluxe Audio Strap”, which makes the Vive much more comfortable to wear, or TPCast’s wireless kit.