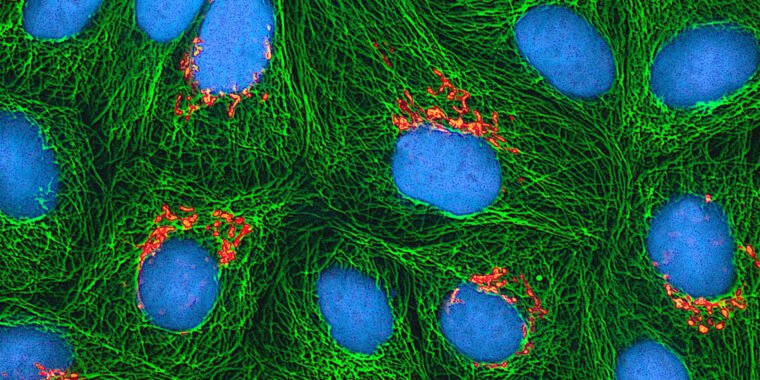 One of the reasons I tend to stick with physics is that the subject is actually quite simple. Each piece of chemistry is more complicated than all the physics put together. Biology, in all its wonders, just baffles what little of my mind is left.

With that in mind, the idea that I’m writing about viruses seems like a bit of a joke. But a cool development that allows researchers to track individual viral particles and watch them invade their hapless victims is just too good to pass up.

Tracking individual virus particles is not exactly new. The idea is that you attach some kind of molecule that glows on the virus. You then hit the monster with an exciting laser and look for glowing points of light. Optical microscopes can then track the location of the virus with very high precision.

With this kind of technology, you can learn a lot about how viruses move. And if you make specific parts of the cell glow a different color, you can tell how often the virus interacts with those parts (say, a specific cell surface receptor) by how often the two glowing points fuse into one.

One of the drawbacks is the glowing molecule on the virus, which is usually attached to the outer shell. In this case, the molecule can interfere with the normal activity of the virus. The virus may not be able to enter a cell because the bolt cutter it normally uses is blocked by the large glowing molecule you attach to it. Instead, it would be preferable to put the glowing bit of the virus on the inside, where it (hopefully) doesn’t change its behavior.

That’s what a group of researchers from China did. But this seems like one of those heroic experiments that only works when the wind is blowing from the right direction.

The researchers replaced the glowing molecule with a quantum dot. A quantum dot is a small blob of material that, due to its small size, will glow when excited by light. In fact, the color of the glow is tuned by changing the size of the blob, so we can create almost any color quantum dot we want.

To get the quantum dot in a virus, the researchers used the procedure by which a virus multiplies. A virus storms the outer membrane of a cell and, once inside the outer defenses, finds its way into the innermost ring of defenses (the membrane surrounding the nucleus). After some sustained siege work, some viruses penetrate the cell nucleus where they can really get to work. These viruses hijack the cell’s replication machinery to make copies of their own DNA, while forcing the cell’s protein-producing hardware to build new capsules. The cell, like some sort of sorcerer’s apprentice gone wrong, does this until it bursts open and spreads the contagion everywhere.

Of course, not every virus particle contains a quantum dot, because the incorporation process is determined by the random chance of what collides with what else in the nucleus. However, the researchers managed to obtain enough labeled virus to conduct some fun experiments.

Since this is a new labeling technique, the researchers did not study anything special, but it showed that they could confirm results that were already known. They showed movies of viral particles entering cells and shooting past the cell’s microtubule network as if they were on a subway system. The researchers were also able to see the virus enter the nucleus. The videos of their observations are available here.

Will everyone be eager to use this new labeling technique? Well, maybe not. First, this only works with viruses that have DNA instead of RNA, ignoring quite an old set of virus types. Second, the procedure is not simple. The document is almost completely dominated by confirming that every step of the process (and there are many) really worked as intended. To me, this suggests that it would take a competent researcher quite some time to replicate this work, let alone start using it for his own research purposes.

List image by National Center for Microscopy and Imaging Research