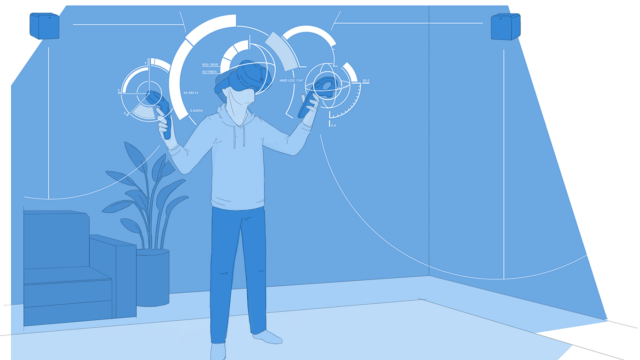 For now, if you want to play any of the virtual reality games or apps in the SteamVR ecosystem, the only hardware you can use is from HTC. However, that can change quickly. SteamVR maker Valve has opened the floodgates to a new wave of VR peripherals with a surprise announcement on Thursday: all licenses for the system’s VR tracking interface will be free.

What does this mean? To be clear, this is not an announcement for new headsets, although SteamVR has always been advertised as a platform that will eventually be open to other VR headset manufacturers. Rather, it’s all about virtual reality add-ons.

If a hardware maker wants to create physical objects that can interact with SteamVR, such as a pair of gloves, a two-handed shotgun, a mock medical device, or anything you can think of, the object in question must be tracked by the “room-scale” pair of infrared boxes of the system. The HTC Vive’s headset and wands work well in VR, especially since they’re each covered by dozens of IR receiver dots. The headset and wands are spread out in such a way that no matter how you hold or use them, one of the Vive’s two tracking boxes can be seen through enough IR dots.

At that point, the controller in question sends that data to a computer, which translates the positions and rotations of those physical objects into 3D space. That’s why you see them appear smoothly in a virtual play space. (You can read more about how this all works on Valve’s licensing announcement page, which includes suggestions for peripherals such as table tennis paddles and golf clubs.)

Third-party hardware makers have flooded recent gaming expos with their own hacked attempts at this sort of thing, usually by attaching extra hardware to existing HTC Vive wands. Now they can contact Steam directly and request a traceable peripheral development kit, which includes EVM boards, Vive tracking boxes, and 40 individual sensors, to create their own working hardware prototype. This kit will be made available free of charge to approved licensees and will contain documentation and information that hardware manufacturers can use to ultimately mass-produce any final product.

However, those who are approved must also attend a training seminar hosted by Seattle-based consultancy Synapse, which costs a cool $2,975 per attendee. The first seminars will be hosted at Synapse’s Seattle headquarters in late September, with more to come, while HTC will host similar seminars across Asia “in the coming months.” Anyone with that budget, time and wanderlust can now sign up for a license (which requires a SteamWorks account) (the first link won’t work until you sign up on the second). The fact that HTC is joining forces with Valve on this consultation part of the deal says a lot about the companies’ VR relationship right now. HTC clearly doesn’t want to screw up that relationship, as it still enjoys leading status as the sole manufacturer of SteamVR headsets.

While Valve representatives answered some of our questions about the announcement, our question about licensee approval and curation—specifically, whether Valve will greenlight someone to make SteamVR-compatible sex toys and teledildonics—wasn’t answered in time for the publication of this article.