Using a virus to kill what antibiotics can’t | Techilink 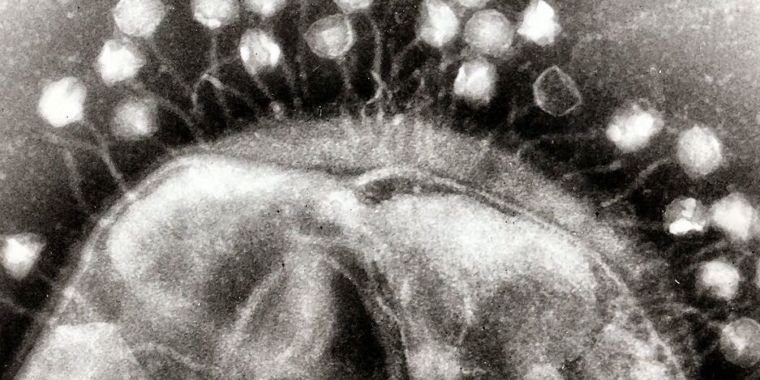 Largely due to overuse, we run the risk of many of our antibiotics losing their effectiveness, leaving us with no defenses against some potentially deadly infections. People are using different approaches to deal with this, such as seeking combinations of drugs that remain effective, developing entirely new drugs, and reshaping the way we deliver these critical drugs. (Although the latter may be an impossible dream.)

There’s another option that was considered even before antibiotic resistance had reached crisis levels: use something that makes killing bacteria part of its life cycle. Like other cells, bacteria often fall victim to viral infections and die when new viruses erupt to infect their neighbors. If this happens in mainstream ecosystems, people reasoned that bactericidal viruses might also work in a lung lung. But those “maybe” always came with a long list of reasons a virus wouldn’t work. Now a group of researchers has tested it on mice with pneumonia, and none of those reasons seem to be a problem.

Viruses that specialize in infecting bacteria are often called bacteriophages, or simply phages. We know some of them shortly after we started studying bacteria, because their spontaneous infections would leave open holes of what would otherwise be an even lawn of bacteria. We’ve studied some of them in detail, and some of the proteins they code for have become important tools in our genetic engineering efforts. And it’s not just quirks that strike when bacteria are forced to live in artificial lab conditions. Surveys of DNA obtained in environments from the deep ocean to the subways show that wherever you find bacteria, you also find viruses that prey on them.

There are many potential benefits to using phages to tackle bacterial infections, apart from the fact that each infected cell will produce more bactericidal phages. Many phages have a small number of bacterial species that they can infect, so they are less likely to wipe out all the other bacteria that are normally part of the ecosystem that lives in or on our bodies and seems to contribute to human health in general. There are also many, many more viruses that we haven’t characterized yet, meaning we’re less likely to run out of options if a few phages stop working. Finally, it is also possible to combine multiple phage species in one treatment, making it much more difficult for bacteria to develop resistance.

That all sounds great – so why don’t we use them? “Resistance is unlikely to evolve” doesn’t help much if bacteria have encountered a particular phage before and have already developed resistance. But that’s not the end of the trouble. Phages are much larger than antibiotics and do not simply spread to the site of an infection. And the immune system is ready to attack and clear things that look like phages, so it’s likely to attack them too.

Despite these potential problems, a US-based team of researchers decided to tackle the supply problem. The team chose the lung as the target tissue, as drug-resistant pneumonia is a major threat. This was a bit of a balancing act. Particles had to be small and low-density to ensure that they penetrate deep into the lungs when inhaled. But they couldn’t be too small or they would be ingested by macrophages, white blood cells that help the immune system clear up infections.

To manage this balancing act, the researchers relied on a technique that creates shells of oil that surround a small water bubble as they float in a water solution. The oil contained the building blocks of a biodegradable polymer. And the water contained a chemical that would slowly decompose into gases, disrupting the surface of the oil and forming a crude polymer shell. By carefully controlling the formation of oil bubbles, the researchers were able to control the size of the polymer shells produced, giving them the right size to get deep into the lungs.

To make these shells carry phage, the researchers simply soaked them in a phage solution. They could then be dried and stored for a few weeks without losing much activity. The dry powder can then be inhaled to deliver the phage into the lungs.

From then on, most of the work is confirming that the phages are still capable of killing Pseudomonas aeruginosa, a cause of drug-resistant lung infections. The treatment worked in culture dishes and when the bacteria had a chance to form a biofilm, a dense, three-dimensional mesh that can protect bacteria from drugs. (It also worked on what the researchers call “synthetic sputum,” but we chose not to look at the details there.)

So the researchers set out to try their treatment on live mice they were infected with P. aeruginosa. Using the virus-coated particles reduced the infection level by a factor of 10, which proved to be enough for the immune system to control the infection. While only 13 percent of untreated mice survived the infection, all phage-treated mice survived. The treatment was also highly effective in reducing bacterial infections in mice that lack the gene damaged in people suffering from cystic fibrosis, often resulting in lung infections.

To gain even more relevance, the researchers took samples from patients with pneumonia and patients with cystic fibrosis. First, they screened the samples against a library of different phages, identifying three phage species that could kill any of the infection samples. Mice were then infected and treated with the phage-coated particles. All but one infections were precipitated by the treatment.

When checking the mice after treatment, the researchers found that the particles themselves had cleared from the lungs within 18 hours of treatment. And there was no indication of an immune response to any of the phages. In addition, bacterial samples taken after treatment showed no sign of bacteria resistant to phage infection. In short, none of the obvious problems we would expect from phage treatment seemed to arise.

All of this looks incredibly promising — it’s somewhat surprising that there’s no disclosure that a clinical trial is planned or underway. And the researchers indicate that it can be done even better, because phages can be manipulated in such a way that they carry enzymes that make the bacteria even more vulnerable (for example by digesting biofilms). There are still some details we want to better understand, such as why one bacterial sample did well despite the phage, but these initial results make getting the details seem like a priority.