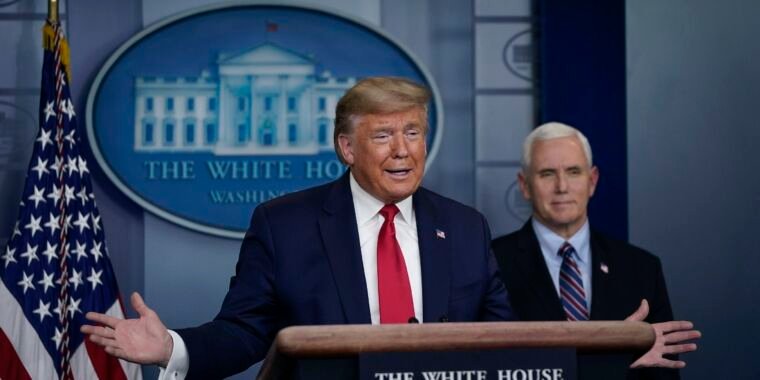 The United States is expected to see about 200,000 new COVID-19 cases per day by June 1, with deaths reaching 3,000 daily, according to a leaked Trump administration document.

“While President Trump is urging states to reopen their economies, his administration privately predicts a steady rise in coronavirus cases and deaths in the coming weeks. The daily death toll will reach about 3,000 by June 1, according to an internal document obtained by The New York Times, nearly double the current figure of about 1,750,” the Times reported today. “The projections, based on government models provided by the Federal The Emergency Management Agency in graph form predicts about 200,000 new cases per day by the end of the month, up from about 25,000 cases per day currently.”

The Times published the document entitled “Centers for Disease Control and Prevention Situation Update”. These charts show forecasts of new daily cases and deaths, as well as how confirmed cases and deaths have risen since the start of the pandemic:

It’s not clear whether the document’s projections assume states will continue to enforce stay-at-home orders through May. The US has so far had nearly 1.2 million confirmed cases of COVID-19 and about 62,000 deaths, according to the Johns Hopkins Coronavirus Resource Center.

The leaked Trump administration document said there are “a large number of counties whose burden continues to grow or are on a plateau of increased incidence, including in the Great Lakes region, parts of the Southeast, Northeast, and around South -California.” Good news from the document is that “incidence rates continue to decline in multiple counties, including hard-hit areas in Louisiana and the New York City area,” and that “incidence rates have recently declined in areas around Chicago.”

Despite the projected increase in daily cases and deaths, the White House is reportedly relying on other, more optimistic forecasts to bolster a plan to reopen the economy. A White House spokesperson told the NYT that “the president’s phased guidelines to reopen America are a science-driven approach agreed with the top health and infectious disease experts in the federal government.”

The White House also said the leaked document had not been vetted. “This is not a White House document, nor has it been submitted to the Coronavirus Task Force or subject to inter-institutional scrutiny,” a White House spokesperson said. “This data does not reflect any of the models done by the task force or data the task force analyzed.”

According to The Washington Post, “A senior White House official said the document will not change the White House’s schedule for reopening.” The Post story also said that “White House officials relied on other models to make reopening decisions,” including a “‘cubic model’ prepared by the Council of Economic Advisers, led by Trump adviser Kevin Hassett. Knowledge of the ‘cubic model’ says it’s currently showing that May deaths are dropping rapidly — essentially going to zero by May 15.” White House officials also rely on the Institute for Health Metrics and Evaluation model, which has been criticized for flawed forecasting.

Trump said on Sunday that up to 100,000 Americans could die from the coronavirus, but the number of US deaths could be much higher based on the internal projections. Trump has fought against governors who favor a cautious approach to reopening state economies, and his administration threatens to sue states and municipalities whose pandemic injunctions infringe on people’s rights or cause “undue interference in the national economy.” .

Update on May 5 at 1:05 PM ET: The Johns Hopkins Bloomberg School of Public Health said it prepared the analysis in the government document, stressing that it is not a “prediction.” “These preliminary analyzes have been provided to FEMA to aid in scenario planning – not to be used as forecasts – and the published version is not a final version. These preliminary results are not forecasts and it is not accurate to present them as forecasts.” the school said in a statement to CBS News. The government document describes the figures of 3,000 deaths and 200,000 cases as projections. Johns Hopkins said that “the information illustrates that there are some scenarios, including the premature easing of social distancing, that are likely to lead to a significant increase in the number of COVID-19 cases and deaths in the United States.” Trump said “those projections are without mitigation. We are doing a lot of mitigation,” said The Hill.