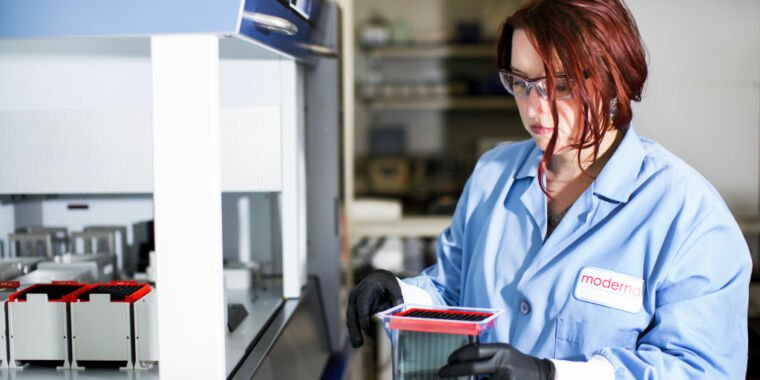 On Monday, the Associated Press reported that they were reviewing the first safety tests of a vaccine against SARS-CoV-2, the coronavirus that has recently spread into a global pandemic. Since we didn’t even know the virus existed five months ago, this is remarkable progress. But the technology that enabled such rapid development is relatively untested on the scale we need for a global vaccine.

How do you quickly make a vaccine?

Most vaccines use viruses or bacteria that have either been treated in such a way that they cannot reproduce or that have been damaged in such a way that they reproduce very poorly. These vaccines are generally very effective, as they expose the immune system to many of the proteins normally made by the pathogen, ensuring a robust immune response. The downside, however, is that you have to be able to isolate and manipulate the bacteria or virus, and then you have to grow and purify it on a large scale. This means that it takes a significant amount of time to build up a production stock for general use.

However, many viruses have a limited number of proteins on their surface that the immune system typically responds to. For these viruses, it is possible to focus on the genes for these proteins, either by cloning them into a harmless virus, or by producing large quantities of the proteins yourself. This still poses challenges in large-scale production, but avoids the steps required to isolate the pathogen and figure out how to grow large quantities safely.

The new vaccine has been developed with an approach that simplifies things even further, allowing development to begin once the virus’s genome has been sequenced. And as we’ve seen, that can happen less than a month after we become aware that there is an outbreak.

It all goes back to basic biology. Proteins are made by cells by translating the sequence of a molecule called a messenger RNA, which is usually transcribed from a gene on the organism’s chromosome. A virus directs a cell to make its proteins by creating messenger RNAs from its own genome and having the cell’s systems translate them into proteins.

The new approach to making vaccines cuts down on this approach. It involves making many copies of the messenger RNAs that the virus uses to make the proteins on its surface and then packaging them into a vaccine. After injection, these copies enter a person’s cells and cause them to make these viral surface proteins. However, without the rest of the virus, these proteins are harmless. And when the actual virus comes along, the person’s immune system will already have been exposed to its proteins and built up a powerful defense.

All of this can be done once the virus’s sequence is available, allowing scientists to identify the genes that code for the surface proteins.

If messenger RNA technology were really as simple as that description, we’d probably already be using it for vaccines. But there are some hurdles that make this more difficult than it seems. First, our bodies usually interpret RNA outside the cells as an indication that something is wrong: it is usually either an indication of a virus, or a cell that has been damaged and is leaking contents. So many proteins are made that break down RNA efficiently.

A second problem is that RNA molecules are highly charged, making it extremely difficult to get RNA molecules through the neutral, fatty membranes of a cell. The company that developed the vaccine, Moderna, has been taken in by a number of other companies, including CureVac, the company the Trump administration had reportedly expressed an interest in purchasing. The process involves encapsulating the RNAs in a small fatty sac, which will protect it from the environment. At a certain rate, these sacs will fuse with the membranes of cells, placing the messenger RNAs in the cell where they can direct the production of virus proteins.

This approach has been tested for some time now, as there are plenty of useful things you can do by getting RNAs into cells, including replacing damaged genes or turning off harmful genes. But these have generally entered the stage of small-scale testing; Moderna itself warns that none of its vaccines have passed phase II clinical trials, which focus on whether the vaccine elicits any form of immune response, rather than a careful examination of its effectiveness.

This is an important caveat with something that must be produced on a scale suitable for the world’s population. We’ve never had to do that with messenger RNA-based therapies before, and there’s bound to be some issues with scaling the technology.

That said, it’s a testament to the flexibility of the approach that a vaccine can be made ready for small-scale production in a matter of months. And both the company and the National Institutes of Health, which helped develop and conduct the trial, have done an impressive job of expediting all the requirements for a clinical trial.

The trial will be conducted out of the Kaiser Permanente Washington Research Institute in Seattle and will focus on identifying doses that are tolerated without side effects. It will enroll 45 healthy adults between the ages of 18 and 55. There are no control groups at this stage of testing; everyone who is enrolled gets the vaccine and the test population is so small that we are unlikely to get any valuable information about protective effects.

Phase II trials will focus on determining whether the vaccine elicits an immune response and should begin in a few months if there are no safety concerns during Phase I. Moderna says it is already preparing doses for the Phase II trials and ensuring that it has the facilities needed to drastically scale up production if needed.

As mentioned above, other companies, both in the US and elsewhere, are developing vaccines at the same time, some of which are almost ready to be tested. Beyond that, there are undoubtedly vaccines in the works that have been developed using more traditional methods.