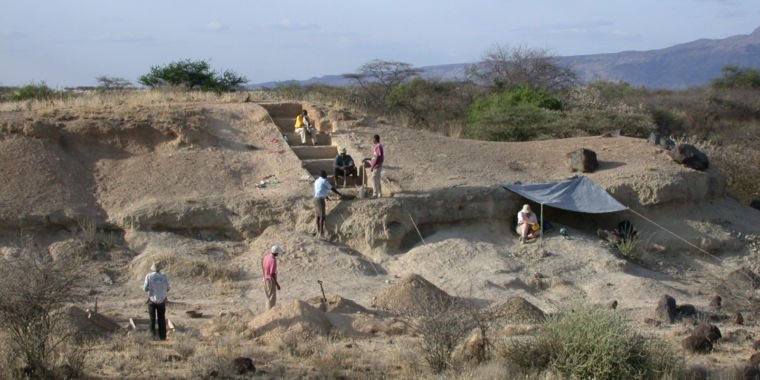 Three new studies suggest that early humans in East Africa started doing much more complex things — making more sophisticated tools, trading with neighboring groups for better rock, and perhaps even using symbols to communicate — to survive the rapid climate changes of 320,000 ago. Those findings may support the theory that larger social networks, more complicated tool-making technology and symbolic thinking prompted early humans to develop larger brains by the Middle Pleistocene, about 200,000 years ago.

But such a development does not just happen. Brains are expensive organs to maintain, in terms of the energy needed to keep them nourished and oxygenated, and that size upgrade would come at a cost. To succeed, larger brains would have to provide enough survival benefit to outweigh the additional burdens they bring.

For that to happen, people’s ability to survive and reproduce would have to depend on the things that require such large brains, such as communicating with many other people in more complex ways or creating and using more complex tools. That’s why many paleoanthropologists have suggested that the kind of cultural developments we see in Middle Stone Age sites in East Africa may have been responsible. Cultural development, in other words, drove the physical evolution of our brains in a very important way.

And according to one of the new studies, early humans made smaller, sharper, more sophisticated stone tools and traded stone resources through social networks that spread across the landscape of Kenya’s Olorgesailie Basin 300,000 years ago. That’s enough time prior to the brain-sized Pleistocene leap to support the idea that culture could boost it. The Middle Stone Age, in East Africa, emerges in the archaeological record as the time when the large, bulky, relatively simple stone hand axes and cleavers of the Acheulean culture (1.2 million to about 500,000 years ago) were used. replaced by small, sharp blades made with the more advanced Levallois technique, which requires careful planning to shatter flakes from a prepared core chunk of rock.

But it was difficult to pinpoint exactly when the Middle Stone Age began. Geochemist Alan Deino of the Berkeley Geochronology Center and his colleagues dated several sites around the basin by analyzing the ratio of argon isotopes in rock layers to determine when the material was deposited above and below a site. That gives a minimum and maximum age for the intermediate artifacts. The data points to the Middle Stone Age, with all its cognitively demanding mechanical engineering and stone trading, which began about 300,000 years ago.

Alison Brooks of George Washington University and the Smithsonian Museum of Natural History and her colleagues turned their attention to a site called BOK-2. Here, in a layer of artifacts dating between 305,000 and 302,000 years ago, they found tools and flakes of obsidian — though there’s no obsidian anywhere near BOK-2. The nearest deposits are between 25 and 50 km as the crow flies, and in the rugged terrain of the Olorgesailie Basin, people would have to walk much further to avoid gorges and steep slopes. And X-ray fluorescence identified about 22 percent of the obsidian on BOK-2 as coming from even further away than that.

In sites older than BOK-2, residents made their tools from local volcanic rock, with exotic materials such as obsidian and green, white, or brown cherts showing up less than eight percent of the time. But as archaeologists moved from deeper, older layers at BOK-2 to more recent layers, they saw the rock sources become more diverse and distant. Between 305,000 and 302,000 years ago, 42 percent of the tools recovered were obsidian, despite the lack of a suitable source nearby.

Obsidian is a smooth volcanic glass that creates such sharp edges that it is still used in some modern surgical instruments. The fact that the early folks at BOK-2 went to such lengths to get it is a sign of highly sophisticated planning. But Brooks says the presence of obsidian also means that the residents of BOK-2 likely traded with people closer to the obsidian deposits, not just walking for days to pick up some rocks and then walk back home.

The sources of obsidian are also near good sites for human habitation – they are home to cattle ranchers today – so people probably lived there during the Middle Stone Age. Although the residents of BOK-2 had taken obsidian home and could have offered salt or ocher from their own area in return, the trips may have had as much to do with maintaining the social ties that make trade possible as with exchange of goods.

There are also indications that goods were being prepared for trade at BOK-2. Among the finds at BOK-2 were several round chunks of soft, dark mineral that were found to contain manganese, which provides a dark brown pigment. But not all of the pigments found at BOK-2 were local. Some of the material found there appears to have come from further west, at a site called GOK-1, where Brooks and her colleagues found two lumps of iron mineral with red streaks. The chunks appeared to have been crushed with a stone to produce powder, and one lump bore two holes that appeared to be man-made.

The choice to import the ocher from a distance rather than using a more common local material that accomplishes the same purpose states that having a red face or hair or clothing or weapons also conveyed some symbolic message… This may have been true of the Olorgesailie ocher, especially considering it’s not from the environment, the red color is very bright, and someone scraped and half-punched a lot to get it into powder form.

So the pieces — large, expansive social networks, symbolic thoughts marked by red and brown pigment, and the latest rock-breaking technology — were in place 300,000 years ago, which is at least 140,000 years earlier than the first real fossil evidence we’ve ever seen. have found. have from Homo sapiens. Deino says the Middle Stone Age “probably provides the context in which the anatomical and behavioral characteristics of our species evolved.”

But what drove the early people of Olorgesailie Basin to go beyond the big, simple tools and small social groups of the Acheulean and suddenly do more complicated things? According to a third study, led by paleoanthropologist Rick Potts of the Smithsonian Museum of Natural History, the answer could be that they were trying to survive in a suddenly unstable world.

His team sampled the ancient soil of the Olorgesailie Basin for fossil particles of plant tissue called phytoliths. According to the carbon isotope ratios in those small plant fossils, life here was fairly stable for most of the Acheulean when the basin was a well-watered floodplain. But about 320,000 to 295,000 years ago, the local climate for wildlife changed unpredictably.

The environment was already slowly shifting to more arid grasslands, but around the beginning of the Middle Stone Age, the climate began to swing from wet to arid without much warning. A source of food or water that early humans could depend on one season may be gone the next. And people weren’t the only ones having a hard time. Large grazing animals died, at least locally, around the end of the Acheulean, and mid-Stone Age archaeological sites usually contain bones from their smaller relatives, better adapted to the drier, less stable climate.

In modern times, hunter-gatherers like those of the Kalahari deal with similar challenges by moving more and relying on extensive social networks to make ends meet.

Trade networks help spread the risks of food scarcity – when survival resources are lacking where one group lives, it becomes useful to be aware and already have a relationship with groups further afield where it can be better… This is exactly what hunting-gathering peoples have done in recent times – their access to resources is not limited to where they usually live and forage, but also to the wider geographic network of places and habitats where others live.

And the early humans of Olorgesailie Basin faced an additional challenge. Eastern Kenya’s geologic history is rife with violent tectonic turmoil, the kind that reshape landscapes in a matter of moments, and the Olorgesailie Basin lies in the shadow of a volcano, Mount Olorgesailie. So when tectonic activity in the region increased around the start of the Middle Stone Age, it made life in the basin even more precarious.

The lesson is clear: When the climate can’t decide and even the ground under your feet isn’t stable, it’s time to step up your rock-playing skills and get to know the neighbors. And that’s what the early humans did, according to Brooks, Deino, and Potts.

These changes, in turn, likely provided the evolutionary impetus for larger brains. So the story of human intelligence isn’t as simple as “big brains let us do more complex things.” By doing more complex things, we were able to develop bigger brains, which allowed us to do even more complex things. By the late Pleistocene, 130,000 years ago, humans were making the first beads, producing paint and using it to draw complex geometric designs, collecting fish and shellfish, and making arrow and dart points.

We just needed some motivation to get there.