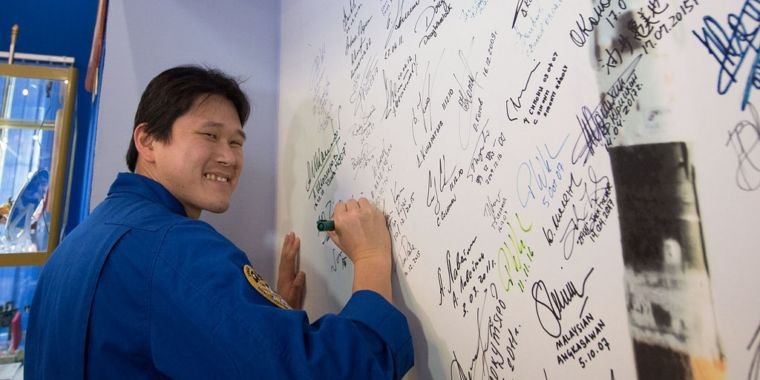 On Tuesday, the space world tweeted in amazement after a Japanese astronaut posted a message on Twitter about his surprising growth spurt. “I have an important announcement today,” Norishige Kanai wrote:. “We had our bodies measured after we reached space, and wow, I had grown as much as 9 cm!”

He had grown so much after just three weeks, the astronaut said, that he was concerned about fitting into his cramped seat on the Soyuz spacecraft for the ride back to Earth later this year. Each astronaut is measured for his or her seat in the small spacecraft used to transport people to and from the International Space Station. Some former NASA astronauts who could fly the space shuttle, including Scott Parazynski at 6’4″, were denied stints at the station because they were too tall to fly the Soyuz.

Elongation in space is normal, as the spine spreads out in microgravity. Typically, astronauts grow by about 2 to 5 cm during a six-month stay aboard the space station and then return to normal height within a day or two after returning to Earth’s gravity.

It turns out that Kanai hadn’t grown abnormally. Later on Tuesday, he returned to Twitter to explain that there was a problem with the measurement. No, he hadn’t grown 9 cm – only 2 cm. He expressed regret for sharing “fake news”, adding: “I’m a little relieved to be able to ride the return Soyuz.”

Mami Sasamura, a spokeswoman for the Japanese space agency JAXA, told Ars that Kanai wasn’t joking on Twitter. Rather, he’d been really worried about his ride home from space.