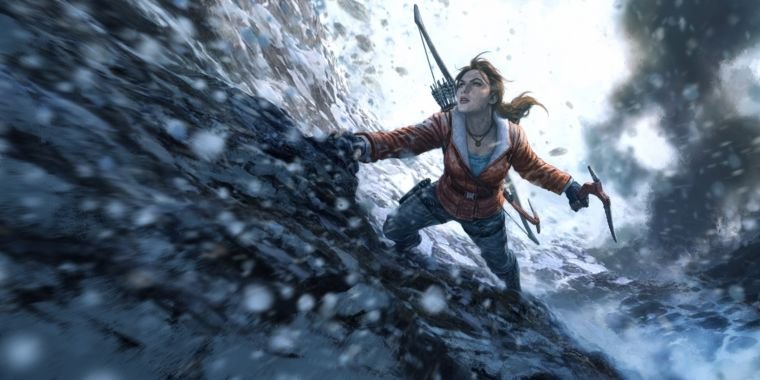 Prepare to feel old: October marks 20 years since Lara Croft made her debut on the Sony PlayStation and Sega Saturn in Tomb Raider. To celebrate, publisher Square Enix has put together a goody bag of treats in the form of Rise of the Tomb Raider: 20th Anniversary on PlayStation 4. There are zombies (because zombies=£££), a new PlayStation VR mode, co-op and even a new point-and-click adventure game mode. Xbox One players get everything, minus the VR support of course, as DLC.

It would have been easy for Square Enix to just cobble together a few knick-knacks that had been chopped out Rise of the Tomb Raider for Lara’s twentieth, but there’s a level of depth that gives the anniversary a ballroom feel rather than a pub feel.

After a few hours of hands-on time, it was the new co-op Stamina mode that stood out. Stamina is largely the same single-player variant that appeared in the original version of Rise of the Tomb Raider, in which you had to hunt for valuable artifacts in a procedurally generated, snowy wilderness. The constant struggle to stay warm and well fed adds to the challenge.

Two players improve the concept as you can rely on each other for food and to scan the environment. But there is also a greater risk of disturbing local predators (wolves, bears, big cats, etc.) or alerting the heavily armed mercenaries who are looking for their own treasure. The shared story you create is much more interesting than the solo story it once was, and the longer you survive, the better chance you have of collecting the materials needed to upgrade your tools and successfully traverse the loot of navigate the booby-trapped tombs.

However, communication is key to all of this, so it’s probably a good idea to team up with someone you know who won’t be constantly trying to troll you by luring angry bears towards you.

There’s a more sombre, deliberate tone to the Blood ties DLC, a point-and-click adventure in which Lara explores her childhood home, Croft Manor, in an attempt to find evidence that she is the rightful heir. Your job is to find clues scattered on tabletops and drawers and solve basic environmental puzzles such as moving ladders and pushing crates to form paths.

They are simple things and are unlikely to leave you stumped. However, if you do, clickable objects can be highlighted in yellow at the touch of a button, making it easy to move quickly from one point of interest to the next. As if that wasn’t enough, Lara occasionally speaks to drop hints.

Anyone thinking about investing in PlayStation VR will be happy to hear about it Blood ties can be played with the headset in first-person, drastically changing the control scheme to accommodate the shift in perspective. You can teleport Lara from one point to any other visible point in the room you’re in, removing the complexity of dodging turns and the risk of motion sickness that’s an essential part of VR. Many VR games use this teleport concept, and it works almost identically here – for better or for worse.

You see, while teleporting works as intended, it’s clunky and inconvenient. I found myself tending to focus so consciously on where I might jump to that I turned off the virtual world around me, which isn’t a great result for a game mode that hopes to be more immersive than usual. It could very well be that these flaws will disappear with practice, but it remains to be seen whether there is enough content in it Blood ties to make it worth it.

However, there are benefits to VR, especially when it comes to appreciating the work that goes into art direction. By taking the time to pause under a hole in the ceiling, you can see the world built for you from a whole new perspective. As you gaze up at the night sky, watch individual raindrops splash on your face, or you can look down and admire the intricate vines that grow around decaying wooden beams and how shadows dance across walls and floors. No, this in itself isn’t enough to validate the purchase of PlayStation VR, but it’s worth experiencing if you get the chance.

Completion of the package is Lara’s nightmare, which also takes place in Croft Manor, but this time the focus is on arming yourself to the teeth and staying alive. Zombies are roaming the corridors and it’s your job to get as high a score as possible by killing as many as you can before succumbing to their meat cravings. Yeah, this isn’t the most original idea, but hey, it’s fun. Scattered around the place are unlockable weapons that increase your firepower beyond the simple gun you start with, as well as keys that grant access to more of the mansion.

Some zombies wear helmets that must be shot off before they shoot a hole in their heads, others have raided the Croft collection of armor and come at you with old shields, and there are suicide zombies that attack you with burning sticks of dynamite. Lara’s nightmare is a well-crafted variation on this now-common form of survival gameplay, but it’s that familiarity with similar modes in other games that makes it so easy to pick up and play.

The diversity of the 20 years celebration package is admirable, and both Lara’s nightmare and cooperative Stamina fashion scores high on the replayability scale. What’s especially nice to see is that there’s been some real experimentation going on on the show, which makes me hopeful for the future of a series that’s only recently returned to serious attention.

Rise of the Tomb Raider: 20th Anniversary will launch on October 11 on PlayStation 4. Lara’s nightmarecooperative Staminaand Blood ties arrive simultaneously on Xbox One and PC as DLC. Season Pass owners get everything new 20 years celebration content for free.