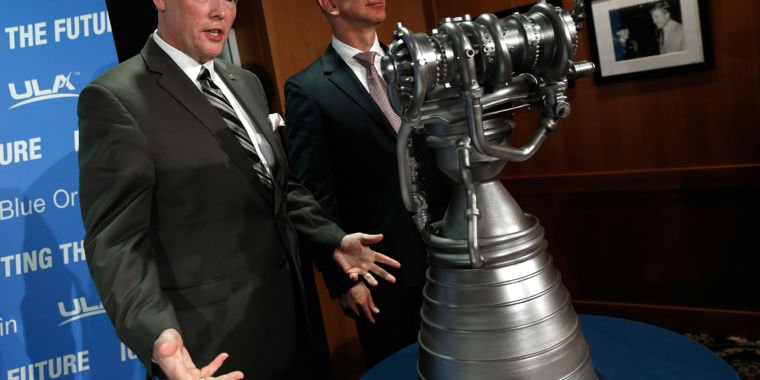 In part one of our interview with United Launch Alliance Chief Executive Tory Bruno, we talked about the company’s efforts to develop the Vulcan rocket, the Centaur upper stage and other projects at the Colorado-based rocket builder. In part two below, we asked Bruno about the company’s partnership with new space company Blue Origin and its ongoing rivalry with SpaceX.

These two relatively new launch companies have taken different approaches with United Launch Alliance, which was founded in 2006 by longtime aerospace companies to provide national security launches for the US government. Blue Origin has tried to work with ULA and in 2014 reached an agreement to supply BE-4 rocket engines for the Vulcan booster. But the companies are also competing amicably, as Blue Origin’s New Glenn rocket will also bid for national security launches, and there is some overlap in the commercial market interests.

SpaceX has taken a significantly more confrontational stance toward United Launch Alliance from the start, stopping the formation of ULA in 2005 and fighting for government affairs, both military and civilian, space missions in the years since.

arse technique: Let’s talk about the decision to buy BE-4 engines from Blue Origin. How difficult was it to convince your stakeholders that this is something ULA should take into account?

Tory Bruno: It certainly took time. It didn’t come about quickly or erratically. We knew we needed a new engine because the government told us, okay, we’re done with the RD-180 engine. It was once the right thing for the country, but now it isn’t anymore. We examined (I personally participated in that) every locomotive out there – locomotives that existed, locomotives that people had drawn on napkins. And we’ve looked at everything. We had everybody come and inform us and the rest. So there was a lot of data and it was a pretty thorough review. I’d say we spent most of the time doing that homework so we could narrow down our list of choices. Really, economics and planning came into this. There were other engines that were perfectly good, but they just didn’t look like they would support the mandate well for when the RD-180 was to be retired.

And then we had to build a business case. Unlike many of the newcomers you’re talking about today, we’re not a start-up company that thrives on investor capital; we are a mature company. We need to close a business case on Vulcan itself. So where our strategic partners [Editor’s note: This is a reference to Blue Origin] brought investment as well as planning, that was quite an important factor. It became quite clear what the right choice was and we arrived at that together with our stakeholders. The next part of that was sharing with people who are basically our customers, the technical risks associated with moving to a new, new propellant, and how they would be addressed and retired. It got a lot easier when we started getting a lot of test data. And as we got bigger and spent a lot of minutes on the bikes, pretty much all those worries disappeared.

Do the costs and benefits of the BE-4 engine outweigh any concerns you had about fighting Blue Origin with their own engine?

Yes that is true. You’re reporting on it, so you know that space launch, and space in general, is a different kind of industry. It’s small. There aren’t that many of us. We all know each other. We compete. We are all in each other’s supply chains at the same time. Northrop Grumman is no different. They supply my solid rocket engines, and it’s really not that uncommon.

What I’m looking for in such an important strategic partnership are actually two things. I’m looking to see that there is some differentiation in terms of the areas of the market we are going to focus on. I am also looking for a mutual need so that we need each other in a certain way. The BE-4 engine is a good example of this. I need a motorcycle. They need the production volume that our launch service model brings. There are a lot of BE-4s on a New Glenn, but so many New Glenns are not supposed to come because of their model and their plans to be able to reuse that. Together we make the engine affordable so that our different markets that we are really focused on can work for us. So they need us as much as they need them.

And then we’ve put together a good deal; you know good fences are good neighbors. Long term pricing and preferential agreements with customers and things like that so they know they have a production flow they can count on, and we know we’re getting motors on time and what they’re going to cost.

Are you interested in flying to New Shepard in person? Was that part of the BE-4 deal, you get six comp’d seats?

No we didn’t. Unfortunately. I’d love to ride it. I don’t know what it will cost, but I feel like I can’t afford it.

I’m curious when SpaceX first appeared on your radar.

I’ve been making rockets my entire career, so as soon as they started flying, I was aware of them. I’ve been watching them all this while running my business at another company.

So when they started flying the Falcon 1 rocket, were you paying attention?

From then on, did you think they would get to where they are now?

So when they were still flying Falcon 1, I think I felt like the jury was out. When they switched to Falcon 9, I thought okay, these guys have the potential to become a supplier in this market, especially when they started getting significant contracts from NASA that would give them the resources to develop their capabilities. So yes, I took them seriously almost from day one.

I’m not going to drag you into a discussion about reusability. I understand that different business cases require different plans. But when you first saw them land on a boat, the drone ship, did you see that as a space geek and thought it was pretty cool? Or did you think, “Wow, they just landed on a boat”?

The first. You can’t see that and not think it was a cool thing to see. It was a really nice piece of engineering. I’m pretty sure I sent Gwynne [Shotwell, SpaceX President] flowers and congratulated her on that achievement. I personally worked on the X-33 VentureStar. Damn it, too bad we couldn’t get those tanks to work.

Anyway, I thought it was something to watch. You know we have a different approach to reusability, driven entirely by our assessment of the economy and the lack of our need for a vertical landing and take-off model for Mars. That’s not something that’s in our equation. They have a different problem than the one we are trying to solve. I continue to have faith in our model and that is why we are sticking to our approach.

Are they good neighbors at Cape Canaveral and Vandenberg Air Force Base?

(Bruno laughs) They are definitely our neighbors and we are working with the 45th Space Wing to keep everyone fair and aligned. It’s hard for them, I think, because there’s a lot of launches happening at the Cape right now and SpaceX that’s clearing up huge backlog that they built up in about five years or so. And we really appreciate that the Air Force is doing the right thing.

I’m not sure if you want to comment on this, but it seems to me that if you really want to open up the solar system for exploration in a cheap way, with a powerful rocket to reach many different destinations, you could use a Falcon Heavy with a Centaur upper staircase. They can get a lot of mass to LEO cheaply. You have a really high performing top stage. Have there ever been discussions about that?

Not really. I’ve never had a conversation with Gwynne or anyone on her team to share that. I also don’t know that I was asked by other third parties.

Let’s say you have my job, and you’re a reporter about this industry. My interest is in getting things right, but also in really telling the readers what is really happening. How can I do my job better?

Oh, you’re asking me to tell you how to do your job better? I was never asked that question. Well, you know, when I look at a journalist, I say that this person is a really good journalist if they’ve taken the time to do the research. The way you ask me questions, you would also ask those questions to other people who might know about it, and see where the truth lies. And you would go talk to my competitor and see what they say.

I think there’s a big challenge for you now that didn’t exist years ago when I first started working with the press. News cycles are now very short. You have to make up stories fast. So if you guys are able to do your research and be fairly balanced, I think that’s hard work, it takes effort, and I respect it. I never expect a publication or a reporter to be my marketing staff. If I’m reading a story and there’s something that’s not complimentary about us, if it’s true, it doesn’t bother me at all.