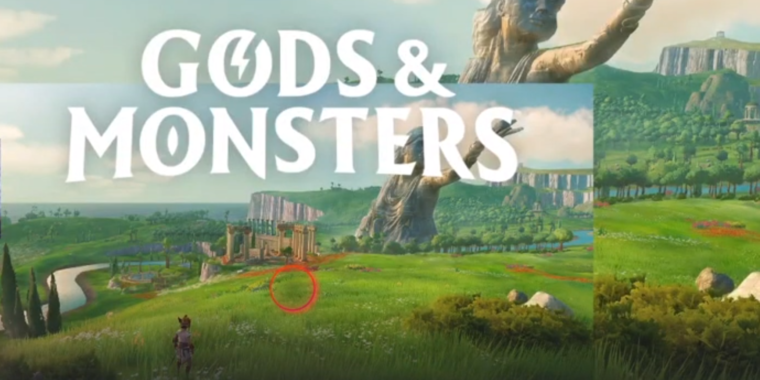 At last year’s E3, Ubisoft offered a vague teaser video about a new open-world gaming series: Gods and monsters† While the game was set to launch on several platforms earlier this year, Ubisoft chose to delay the game, along with many others, until later in 2020. We wondered if this month’s deluge of E3-esque streamed videos was a look at how the game is shaping up.

Instead, our first look at the game comes from another “video streaming” source: an accidental leak of a playable build hosted by Google Stadia.

Users in multiple Stadia territories reported finding a game in the store interface on Thursday called Orpheus, which can be claimed for ‘$0.00’. Once claimed and tied to their accounts, users were greeted with a clear Gods and monsters title screen and then dumped into a prototype interface with options for “Play” and “Play Dungeon”. (The game has since disappeared from anyone who claimed it.)

The former option simulates players entering a room that largely resembles a scene Assassin’s Creed Odysseycomplete with a large, recognizable rug, and it reuses many others odyssey resources, including menus, sounds, a “notice board” with quests, and fonts. This could be due to leading that game’s development team G&M‘s development, but it also makes clear that G&M will follow in the AC the footsteps of the series, in terms of traversing an open world and completing a variety of primary and secondary quests along the way.

After interacting with a temporary version of the Greek god Hermes, which consists entirely of white blocks, the protagonist of the game is free to jump from the starting tower of this zone, leading to a huge outer world of trees, rivers and lakes that contain more resembling Legend of Zelda: Breath of the Wild† The mechanics of this area are limited, so all players can do is jump around, activate a “double jump” and use a wall-climbing system. When players cling to walls, a circular stamina meter appears – and it shamelessly resembles the exact same climbing system from botW†

The “Play Dungeon” option loads an unfinished open area with some climbing, running, and jumping, along with at least one huge melee weapon and one bow and arrow puzzle. This zone also has a variety of placeholder geometry with white blocks, especially in the archery puzzle targets.

This can’t be the way Ubisoft wanted to reveal G&M‘s gameplay to the world (which until today had only appeared in “sweetened” images provided directly by Ubisoft last summer). But this strange early prototype launch is likely indicative of the reality of game development in 2020, where companies are coming up with inventive ways to conduct QA testing outside of traditional offices.

Stadia may very well be an ideal environment to launch, test and compare different builds of games in development, rather than expecting larger fleets of QA testers to have a variety of debug kits and other hardware in their home office. Lot 2 studio Bungie said exactly this in a March interview, telling IGN: “It’s hard to get large-scale playtests — there’s a lot of bandwidth involved — so [Stadia has] worked with us to set that up, and it looks like it’s going to be a great solution for us.”

But that all goes out the window when the wrong build of a game is implemented or made public because of everything ranging from a bug on the part of Stadia to someone at Ubisoft tapping the wrong “publish” button – and from the At the time of going to press, it is unclear where the blame lies for the early publication of this prototype. That this is happening to Ubisoft is particularly bad news for Stadia, as Ubisoft has remained one of the streaming platform’s more optimistic partners in terms of games published there. (Other third parties have begun to publicly shrug their shoulders about the eventual impact of Stadia.)

Neither Ubisoft nor Google’s Stadia team immediately responded to questions about the leaked prototype.