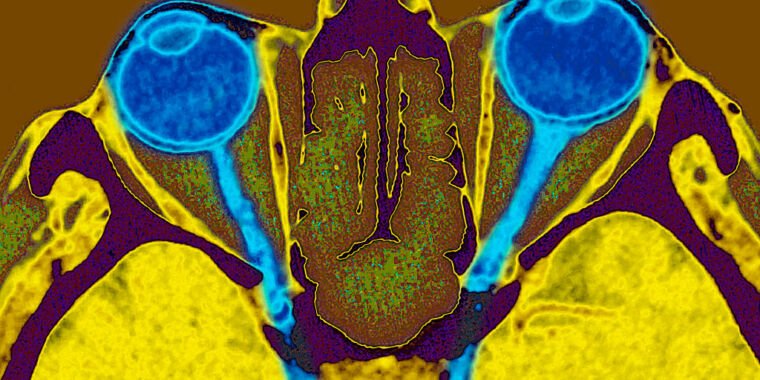 Our visual system is complex, with photoreceptors that pick up incoming light and at least three types of neurons between it and the brain. Once in the brain, visual input is interpreted by multiple special regions that build a scene from tiny pieces of shape and movement. The result of that processing can be further interpreted by areas of the brain that handle things like reading or facial recognition.

With all that complexity, many different things can go wrong. Accordingly, we will probably need multiple solutions if we want to try to fix these issues. So it was nice to see this week the results of two very different approaches to addressing visual problems that have been tested in lab animals. One group manipulated biology to correct problems in the transfer of information between the eye and the brain, while another group used electronics to completely bypass the need for an eye.

One of the most exciting developments in tissue repair is the recognition that we can convert many cell types into stem cells just by activating four specific genes. Unfortunately, activating those genes in mice on a large scale kills them, because the genes also promote loss of normal cellular identity and uncontrolled division. A huge collaboration in the US suspected that many of these problems were due to one of those four genes (called MYC), so it focused on working with the remaining three. The first showed that activating these three in cells from older mice restored properties typical of younger cells without any loss of normal cell function.

From there, the researchers focused on their real target: the eye. In particular, they focused on a population of cells that connect the back of the retina to the brain, called retinal ganglion cells. The failure of these cells, which can occur in diseases such as glaucoma, results in a progressive loss of vision. When mice are born, these cells are able to re-establish the connections between the eye and the brain if those connections are broken. But that ability is quickly lost.

So the researchers damaged the optic nerve and then activated the three stem cell genes in the retinal ganglion cells. With the genes active, even in adult mice, the connection was restored. The same was true when they artificially induced glaucoma in these mice. Tests of their vision indicated that almost half of the lost visual acuity was restored by this gene treatment. The same was true for the loss of visual acuity associated with aging, which was confirmed by comparing mice aged three months to mice about one year old.

All this happened without the growth of new cells. Instead, the existing cells seemed to be able to repair or replace the damaged parts (called axons) that make up the optic nerve. The researchers further showed that this repair relies on changes in a type of chemical modification of DNA called methylation, which can alter the activity of many genes.

The second study, conducted by four European researchers, focuses on events far below the eye. Once signals reach the brain, they are first interpreted by a region that has a one-to-one physical mapping with the retina. In other words, the geometry of neurons in the part of the brain that receives signals from the retina reflects the layout of the retina itself. The researchers use this correspondence and some electronics to try to activate the visual system without involving the eye.

They rely on a set of electrodes called the Utah Array to make connections to the neurons in this part of the brain. The Utah Array doesn’t have that many electrodes — Elon Musk frequently references how much more his Neuralink hardware will have — but since these are lab animals, the researchers here are simply implanting a collection of Utah Arrays into primates. Implanting 16 individual electrodes in one brain isn’t something that will get approval if it’s a human, but it does what it takes in a research context.

The researchers don’t just use these implants to wire the area where visual signals reach the brain and are first interpreted; they also align with the area where those interpretations are further processed. This helps them determine the right amount of current to inject into the brain to stimulate a little bit of the visual field without overwhelming it. These small injections create so-called “phosphenes” – which are perceived as small flashes of light. And because of the geometry of this part of the brain, the researchers can determine where the flashes of light appear in the field of view.

In general it worked. The primates usually focused their eyes on the spot where they had observed the flash of light, even though nothing had happened at that location that would have registered on their eye. The monkeys were also trained to identify whether two dots were arranged vertically or horizontally, and they managed to do so when the “dots” were instead phosphenes generated by the electrodes. They weren’t as good as when they were shown physical dots, but they certainly did a lot better than you’d expect from a random pick.

More dramatically, the monkeys were also trained to recognize letters and did so even when the letter was created through a series of existing injections. In other words, the monkeys were able to recognize a pattern of phosphenes as an image of a letter — again, not as well as they managed when given an actual letter, but well above random chance.

For starters, it’s important to be clear that both are only early attempts to find out what’s possible with lab animals. We are still a long way from treatment in humans. And it’s hard to interpret how much vision change we bring about through both techniques, since we can’t ask lab animals what they see and have to rely on indirect tests of their visual abilities. And there are a lot of potential safety concerns here, especially for something that alters the activity of human genes.

That said, of the two, the gene manipulation experiments are much more intriguing. We already knew that electrodes placed in the right part of the brain can produce visual artifacts when activated. To some extent, organizing the visual artifacts to convey information was a matter of engineering more than anything else. But the apparent recovery of nerve function lost through age or injury is much more unexpected, as is the fact that it can be done with a relatively minor genetic intervention. If it can withstand replication, it certainly seems to point to applications that are much more extensive than vision.