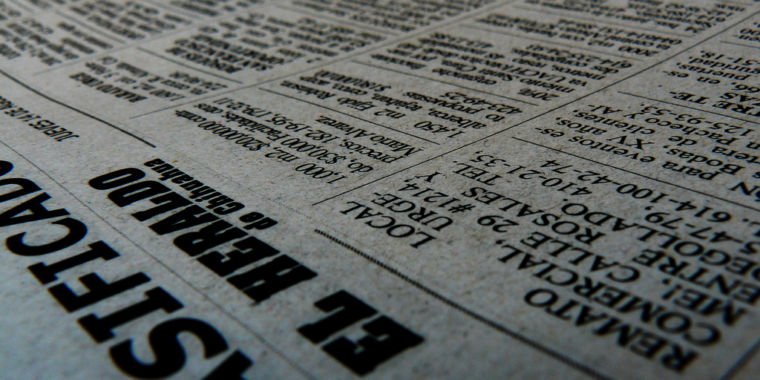 On many issues, such as vaccine safety, climate change, and GMO foods, public opinion is ill-suited to our scientific standing. That dissonance has led many people to wonder how we can do a better job of communicating scientific information to the public. But the Pew Research Center decided to ask a related question that is just as important: Where does the public now get its scientific information?

The answer, unfortunately, is that most people in the US don’t get any scientific information at all. For the small number of people who see significant scientific information, most of it comes from news broadcasts. Oddly, however, the public is unimpressed by the primary source, as less than 30 percent of those surveyed think news outlets actually get the science right.

Being optimistic, that suggests there are enough scientific news sources out there for people to come across it even when they’re not looking for it. On the pessimistic side, this means that two-thirds of the US don’t see much information about science.

Within the US, there are several sources that people turn to. Just over half saw scientific information in traditional news sources; just under half watched documentaries or other video-based material. A quarter went to a scholarly journal (in print or online), and 10 percent visited museums or other exhibition centers.

The disappointing aspect here is that there is no correlation between how popular a resource is and how people rate it for quality. So while general news was the largest source, only a quarter of those surveyed think that the news usually contains the right scientific information. In fact, none of the sources were considered particularly accurate. Even museums and dedicated science journals were rated as getting the science right most of the time. However, these numbers rise significantly among active consumers of science news, more than 70 percent of whom believe that museums, documentaries and science magazines usually do well.

A third of the population surveyed also hear about science news from friends and family, although only 16 percent of those surveyed believe their loved ones are a good source of accurate information. Similar things are true for social media. A quarter of the public follows at least one science-focused account, but half of the public thinks social media is a bad place to get accurate information.

While much research has examined how partisanship influences our acceptance of scientific information, there is not much evidence for this in this study. For example, Democrats and Republicans are equally likely to be active consumers of science news. Republicans are more likely to think the news media misinterpret stories than Democrats, but the gap between the two isn’t huge.

Despite the low number of regular consumers of scientific news, the public also says they are interested in more. More than 70 percent of the population surveyed said they were interested or very interested in seeing science news; that’s only slightly below politics and way ahead of both sports and entertainment news (the latter two were both at 47 percent). However, when asked why they don’t consume more science news, the public had many excuses, none of which stood out. These excuses ranged from not having enough time (46%) to disagreeing with the news they hear (23%). “Boring” and “too hard to understand” both came up, suggesting that part of the problem lies with the media.

The media also gets much of the blame for the public’s feeling that reporting on science is inaccurate. Those surveyed believe that the media reports too quickly on early results, simplifies most reporting and emphasizes disagreement among scientists. But the public also takes some of the blame, as most people think we’re generally bad at judging what scientific information is solid and try too hard to find ways to make results relevant to ourselves. Scientists get caught trying to do the same thing (pretending every result is relevant to humans) and generally hype their research.

But the Pew also asked people to list some news they’d seen that didn’t add up, and the results were pretty mixed. One respondent was convinced that it was irresponsible to suggest that aliens could be behind a homeless woman’s strange behavior, even though scientists themselves had considered the possibility. And in some cases, people were angry about the accurate reporting (like the person who complained, “There is no clear link to prove that humans are an important factor in global climate change”). In other cases, they were angry about really bad coverage, such as a documentary that treated mermaids as real or an article that promoted creationism.

In other words, complaints about the mixed accuracy of science news are based on a mixed understanding of the underlying science. As a result, people come away from accurate reporting believing it was problematic.

All in all, it paints a picture of an American public that wants to get excited about science, but doesn’t have the time and energy to devote themselves to reading science news and is often disappointed with the results when they do. And while the purveyors of science news get much of the blame here, the public recognizes that hype-driven scientists and the public’s lack of knowledge only make the situation worse.

Is there an obvious solution? One option is to treat scientific reporting as scientific results and subject them to scientific review. Climate Feedback (where Scott Johnson of Ars is a contributor) contacts climate scientists and gets their evaluation of relevant press coverage. However, it is not clear whether the model can be extended more broadly to other fields of science or whether the public is aware and motivated enough to rely on such a thing to evaluate press coverage.