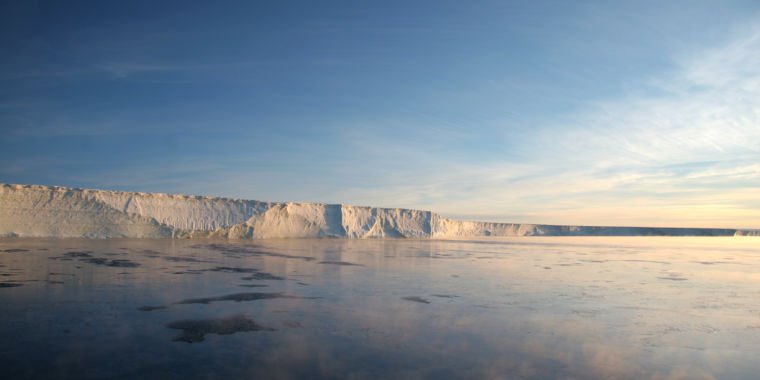 One of the most shocking climate science studies of recent years took place in 2016. That study, by David Pollard of Penn State and Rob DeConto of the University of Massachusetts, Amherst, showed that adding a few physical processes to their model of the Antarctic ice sheets caused it to cause significantly more sea level rise this century. In their simulation, shrinking Antarctic glaciers raised sea levels by a full meter by 2100 — and things only got better from there.

These simulations were much closer to hypotheses than rock-solid predictions. The model showed that these processes – the collapse of ice cliffs above a certain height and the pressure driving of ice crevices by meltwater – can make a huge difference. But such scenarios have not been studied well enough in the real world to know whether the model represented them properly. Fortunately, that task climbed up the priority list after the work was published.

A newly published study led by Tamsin Edwards at King’s College London first delved into DeConto’s and Pollard’s simulations for some clarity. This team thought they had a better way to characterize the range of results in the simulations to find the highest probability answers. They didn’t have the time for the supercomputer to iterate over the simulations and add new ones, so instead they ’emulated’ the simulations by displaying the existing ones with some statistics. In this way they can fill the gaps between the limited number of simulations.

The original study had applied a general method of varying the numbers for factors that are not exactly known, generating several model versions that span the possibilities. They then used those different versions to simulate different periods of sea level rise in the past. Versions that couldn’t match the past were discarded before simulating the future.

Edwards and her colleagues found that the selection process relied heavily on the estimate of sea level rise from Antarctic ice in the mid-Pliocene, 3 million years ago — one of the comparison scenarios. Sea level contributions from that time are difficult to determine, and the original study used “low” and “high” ranges 5-15 meters higher than today or 10-20 meters higher.

It turned out that there was a big difference between the model versions corresponding to the low range or the high range, with the latter simulating much more sea level rise in our future. Rather than split the Pliocene range in half, the new study decided to simplify it into one scenario. It also gave the model simulations a little more leeway in matching scenarios like this one to be a little more realistic about how accurate the ice sheet models are expected to be.

As with the first study, the model results were also compared with the last warm “interglacial” period about 120,000 years ago and with satellite observations dating back to 1992.

These minor tweaks — coupled with the “emulation” method that fills in some of the gaps — offer a different perspective on the original model study. The researchers find that the ice cliff collapse process (which significantly increases future sea-level rise projections) does not necessarily improve the model’s fit to the comparison scenarios. About 55 percent of model versions of the ice cliff process fit all three comparison scenarios, but so did 51 percent of the model versions without the new process.

Looking at the range of future projections of all these model versions, the new study shows that the most common result is lower than the average result shown in the original study. Only a few model versions reach that full meter of sea level rise due to the loss of Antarctic ice by 2100. The most common result of the ice cliff process is about 45 centimeters (assuming there is no reduction in greenhouse gas emissions). Without the new physics of ice cliffs, the most common result is about 15 centimeters, which is still higher than the range estimated in the latest IPCC report.

Overall, the researchers hope this provides a clearer picture of what the DeConto and Pollard model was doing in 2016. It certainly highlights angles for future research, both by comparing this to other ice sheet models and by trying to study these additive processes on the ice.

A second study published at the same time — involving some of the same researchers, but led by Nick Golledge of the Victoria University of Wellington — builds on similar modeling work to study the effects of all that melting ice flowing into the oceans. . The global climate models used to project future warming have mostly failed to simulate melting ice sheets, and this study sought to quantify what they could be missing.

This ice sheet model used the warming of those global climate models to project ice loss from both Greenland and Antarctica, but the team also used a separate climate model to simulate the effects of the resulting glacial meltwater.

Two results stood out. First, the meltwater had a significant impact on Antarctica, melting even more glacial ice. Adding fresh water — which is less dense than salt water — to the ocean slows down the mixing of deep and shallow water. As a result, warmer water (a relative term in Antarctica) gets trapped around the ice, encouraging melting. This feedback process increases the total contribution of the sea level rise of Greenland and Antarctica from 16 centimeters to 25 centimeters.

Second, Greenland’s meltwater had a greater effect on the climate than expected. Around Greenland, the Atlantic Ocean also mixes shallow and deep water — an important part of the Atlantic Ocean’s conveyor belt-like circulation. Here too, fresh water would pollute the works and slow down the assembly line. In this case, this could have major consequences for the transport of warm surface water, with consequences for the surrounding climate.

In their model, the Atlantic Conveyor Belt will slow down by about 15 percent by 2100. This is much less than the total downtime of the conveyor as depicted in the disaster movie The day after tomorrow (so that the consequences of such a change are also completely misunderstood), but 15 percent is very significant. The change lowers the average global temperature by about 0.3° Celsius, but more importantly, it significantly increases the year-to-year variability of air and ocean temperatures in the region. This implies that global climate models cannot ignore this meltwater, as it could have a surprisingly large impact this century.